To many, Sepilok means one thing: orangutans. In the fight to save these bright-orange ‘men of the forest’, the towering dipterocarp trees of the Sepilok sanctuary have become the front line. And, it does represent your best chance of seeing this critically endangered species in its own environment, while directly contributing to the orangutans’ welfare. But, this little town has also become a focal point for wider conservation efforts, with the Rainforest Discovery Centre and Bornean Sun Bear Conservation Centre within walking distance.

To humans, the Sepilok Orangutan Rehabilitation Centre is a circular series of wooden walkways that cut through thick jungle. To its resident orangutans, it’s 40 sq km (15 sq miles) of swingable vines, snackable tree shoots and perfect nest-building material in the strong boughs of the Borneo ironwoods growing there. The focus is the feeding station, a raised platform where, twice a day, fruit is laid out for the orangutans to feed on and supplement the diet of those who haven’t quite developed the skills to forage independently. 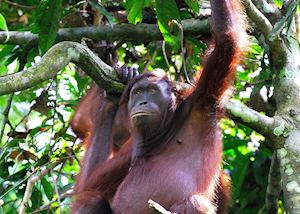 The morning feeding is the busiest, when day-trippers on their way to the Kinabatangan River pass through. If you have time, we suggest returning for the quieter afternoon feeding. You can also visit the outdoor nursery where, from behind glass windows (for their protection), you can watch orphaned infant orangutans play. These cheeky-faced youngsters have lost their mothers due to deforestation or poaching, or have been reclaimed from the pet trade. Here, they can gradually learn the skills they’ll need to be rehabilitated back into the forest.

Next door is the Bornean Sun Bear Conservation Centre, which opened in 2014. A series of walkways high up in the tree canopy let you peer at the bears as they forage for food below or nap on the boughs above. Every now and then, one will effortlessly clamber up a nearby trunk.

A big book of bear photographs details the name and characteristics of each bear, as well as the reason it ended up in the sanctuary. Members of staff man the viewing platforms, eager to answer questions and point out each bear’s personality — the pale horseshoe shape on their chests is the equivalent of a fingerprint.

Most visitors don’t make time to come here, so you’re likely to have most of it to yourself. The visitor building hosts a range of exhibitions and a plant discovery garden, but the pièce de résistance are the canopy walkways that skim the treetops of the surrounding Kabili-Sepilok Forest Reserve.

The metal walkways are interspersed with viewing towers, which poke out above the canopy, reaching 25 m (82 ft) at the highest point. As you walk, you’ll see signposts to some of the key species of tree. And, as you look out, you might spot the white trunks of menggaris trees shooting above the treeline — often reaching more than 80 m (262 ft), they’re some of Borneo’s tallest specimens.

Stay at Sepilok Nature Resort and you’re a few minutes’ walk from the sanctuaries. You’re also well-placed to join a guided night walk in the Kabili-Sepilok Forest Reserve. Here, to a crescendo of frog and cicada calls, you might spot slow lorises, tarsiers or flying squirrels.

The best time to go to Sepilok is between March and October, when the rainfall is lowest and temperatures average 30°C (86°F). For the rest of the year, rainfall can be heavy, making wildlife spotting tricky.

Our itineraries will give you suggestions for what is possible when you travel in Sepilok, and they showcase routes we know work particularly well. Treat them as inspiration, because your trip will be created uniquely by one of our specialists.

Our expert guides to exploring Sepilok

Written by our specialists from their own experiences of visiting Sepilok, these guides will help you make the most of your time there. We share both our practical recommendations and the best ways to appreciate Sepilok at its best.