Borneo has some of the last untouched rainforests in the world, with wildlife and plant life that you just can’t see anywhere else. I hadn’t moved far on my first trek before being greeted by the dangling arm of an orangutan.

Well laid-out trails give you access to and routes through Borneo’s protected reserves and parks. You can navigate through the tangled jungle, vines dangling around you, or scale the jagged peaks above.

One of the walks I suggest below – the Headhunters’ Trail - also gives you the chance to experience the warm hospitality of the Iban people while staying in a traditional longhouse.

Sabah is Borneo’s northernmost state, which juts out towards the Philippines. In the east of Sabah, Tabin Wildlife Reserve is one of Borneo’s largest protected forests and a dedicated breeding ground for endangered wildlife. It is best accessed by a two hour drive from the town of Lahad Datu. Your driver will take take you through regimented palm oil plantations until the jungle begins to take over.

The extensive network of trails dotted with the occasional lookout tower means there’s a multitude of different walking routes through Tabin Wildlife Reserve. Spend a few hours making your way to a nearby waterfall or tackle a full day route and enjoy lunch surrounded by rustling jungle.

Binoculars are vital to make the most of the wildlife all around. My guide, with eyes like a hawk, spotted the tiniest sliver of an orangutan through the trees. Asian pygmy elephants, found almost exclusively in northern Borneo, have a smaller territory here than in other reserves, giving you the best chance of encountering them. I remember hearing the male elephants roar in the depths of the jungle around me, their distinct rumbles carrying for miles.

I’d suggest spending two nights in the area at the Tabin Wildlife Resort on the fringes of the reserve. Choose from a lodge nestled in the dappled shade of the hillside or overlooking the streams running gently beneath the resort. Watching the glossy black darter bird scan for fish, with its twitching snake-like neck, was a wonderful way to finish the day.

Rainforest walks in the Danum Valley

An area of pristine primary rainforest, the Danum Valley lies to the west of Tabin Wildlife reserve. As my 4x4 clambered over bumpy logging trails and handmade bridges from Lahad Datu, it felt like I was heading into the depths of the wilderness. We hadn’t driven far into the park before I saw a monitor lizard, followed almost immediately by my first Asian pygmy elephant sighting.

The Borneo Rainforest Lodge is the only option for accommodation. Set alone in the heart of the valley, it feels like a true rainforest escape. On leaving the lodge one morning, I was greeted by an orangutan dangling down to get a drink from the river.

Choose a deluxe chalet and you can relax in your own balcony bathtub with the foliage rustling around you.

The walks all begin from the lodge and can be as challenging or relaxing as you wish. The undulating topography lends itself to some of the best routes I’ve walked, where viewpoints are high enough to look right over the forest canopy below.

The walk to the ominously named Coffin Cliff passes an abandoned burial site of the indigenous Sugpan tribe. As was the custom, wooden coffins are embedded into the cliff face, acting as a reminder of the cultural as well as natural importance of the valley. Making it to the pinnacle of the cliff rewards you with views across the seemingly endless rainforest below.

While the wildlife is prolific, some of the rarer animals are a little tricky to spot given the vast area they roam. I’d recommend taking a night safari in a 4x4 along the logging trails where you can see the nocturnal bearded pigs and flying squirrels, and glimpse the grey leaf monkeys sleeping up in the trees.

Stay with a local family in Tanjung Datu National Park

The state of Sarawak stretches along the northwest of Borneo from the Indonesian border to the tiny nation of Brunei. Located right on its tip, curving out into the South China Sea, Tanjung Datu National Park combines Borneo’s classic jungle trails with isolated sandy beaches and traditional villages.

I’d stay in the tiny village of Kampong. The Malay families here operate a homestay programme and take turns to host guests in one of the traditional wooden houses scattered around a central sandy cove. The home cooked meals are eaten with the family whilst sharing local drink or two.

The walks into Tanjung Datu National Park are particularly good for families. Trails cross gently rolling hills with plenty of curious looking plants and animals to spot along the way. On the path into the rainforest, the local people have built towers pitted with indentations to encourage swallows to nest, enabling the villagers to harvest them for a local delicacy bird’s nest soup.

Although it’s one of Borneo’s smallest national parks, Tanjung Datu’s rainforest fringed beaches boast some sights that single it out, from the wonderfully named strangler fig plant to the tiny mouse deer. The beaches are often lined with purple flowering morning glory plants.

At the end of your walk you can take a traditional boat back to the village, drifting past abandoned beaches and coves along the way.

If you’re looking for a more challenging trek, I’d suggest the long but not technically difficult climb to the top of Borneo’s highest summit, Mount Kinabalu. With good domestic flight connections across Borneo, it’s best accessed by a short flight to Kota Kinabalu town in the north west of Sabah.

Reaching the top of Mount Kinabalu and the return descent takes two nights, with two full days walking. Starting off the day surrounded by grassland, you gradually ascend to the rocky outcrops above. After a night in a basic but comfortable mountain lodge you then head for the summit to be rewarded with panoramic views right to the coastline.

For the ultimate challenge, you can traverse the mountain on the world’s highest via ferrata (iron road in Italian) route. Clipped into a secure rope system, you negotiate a series of ladders, ropes and walkways to the mountain top with a guide, getting to see an otherwise hidden side of the granite plateau. Taking an average of eight hours, you’ll need a good level of fitness to complete the full route otherwise you can choose to complete just part of it.

Whichever route you take, after completing the trek I’d recommend taking a short boat ride from Kota Kinabalu to Gaya Island, part of Tunku Abdul Rahman Marine Park. Recover from the endeavours of trekking on the undisturbed beaches or snorkel through coral reefs shimmering with fish. I’d stay at Gaya Island Resort, overlooking the tranquil ocean with a backdrop of jungle that twinkles with fireflies at twilight.

If you want something a little closer, the Shangri La Rasa Ria Resort and Spa is only one and a half hours drive from Mount Kinabalu. Surrounded by rainforest, looking out onto a long swathe of beach, it’s a good location to recover from your trek.

A relatively small national park, Mulu sits just south of the tiny nation of Brunei. Easily accessible by direct flights from Kota Kinabalu and Kuching, it’s an area that can only be explored by boat or foot. The forest isn’t as lush as other areas of the island, but visiting the ancient caves and the tribal communities who live here make up for it. Before starting on a trek it’s worth adding a visit to Deer Cave – best visited at dusk when you can catch the mass exodus of millions of bats.

There are two main treks on offer here, which, for the proficient trekker, can be combined for a thorough exploration of the area.

The Headhunters’ Trail is a two night journey following the ancient pathways of Kayan tribal war parties who would dart along the trails to raid local villages. Starting in Mulu National Park, the trek snakes through the jungle to Camp Five overlooking the Melinau River, where you can relax and watch the local Iban people paddle by in traditional dugout canoes.

The next day ventures deeper into the jungle occupied by the Iban, and you spend the night in one of their traditional longhouses before taking a longboat out of the jungle to your next destination.

The Pinnacles Trek, while a shorter distance, is more arduous and takes two nights. The first day begins with the same trek to Camp Five. The second day entails a long climb to the peak of Mount Api, which culminates in a challenging climb over boulders. On arriving at the summit you’re rewarded with a view of the pinnacles, a sea of limestone spikes punching out of the jungle below.

Try a more challenging trek in the Maliau Basin

For more experienced trekkers, the Maliau Basin is a chance to explore some of Borneo’s most isolated jungle. Located just 30 minutes from the Indonesian border, its base camp, better known as Agathis, is reached by a short flight to Tawau in Sabah followed by a five hour drive down into the basin.

Also known as the 'Lost Word', this remote area is one of the most unspoiled and diverse ecosystems in the world. I recommend a four day circular trek ending back at Agathis camp to see the best of it on foot.

The narrow trail loops through dense jungle where rare plant species grow. The pitcher plants are fascinating, if a little macabre, to watch as they catch and digest unsuspecting insects.

Clouded leopards, orangutans and the Sumatran rhino have been recorded in the region but the sheer size of the area can make wildlife difficult to spot. I suggest keeping your eyes up on the canopy far above you, as it’s usually possible to see the shadows of the birds and monkeys dancing about.

Practical advice for walking and trekking in Borneo

Regardless of the duration or difficulty of your trek, having a guide with you is a real necessity, and sometimes a legal requirement, in Borneo.

Not only do the guides keep you safe from the surprisingly large Asian pygmy elephants and other wildlife, but their intimate knowledge of the environment makes the experience all that more enjoyable. Only a local guide will know where some of the more elusive animals, such as the wild Asian leopard cat or western tarsiers, come to drink at dusk.

Best time to walk and trek in Borneo

Contrary to the rest of Southeast Asia, the best time to visit Borneo for walking and trekking is between March and October, when the weather is at its driest.

I’ve found the pleasantest months to visit are June and September, which tend to be a little quieter than the peak months of July and August, but still relatively dry. It’s important to bear in mind that, due to the ecosystem, the rainforest gets rain showers all year round, which can be incredibly refreshing after a long day’s hike. 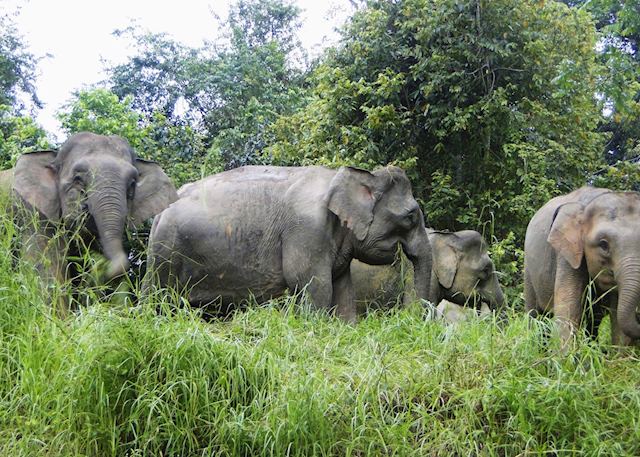