A city of astronomers, sacred pools, funeral pyres, secretive tantric temples, and shrines for so many gods, there’s one for (at least) every day of the year. If you’re looking for an assault on the senses, you’ve found it. Nothing in India hits you quite like Varanasi’s incense-scented, smoke-filled air. Like the wavering light from thousands of oil lamps. And, like the rhythmic nightly chanting that builds to a crescendo as golden plates of floral offerings float down the Ganges, the sacred waterway that brings most people here.

Varanasi is a north Indian city in the state of Uttar Pradesh. But, it’s also a place written into myths, legends and sacred texts dating back hundreds of years. It’s where the Hindu god Shiva is said to have torn off one of Brahma’s five heads during a fight. Protagonists in the ancient Hindu epic Mahabharata came here to atone for their sins. And, it’s at this point along the Ganges where Hindus aim to attain moksha — a sacred form of enlightenment at death. 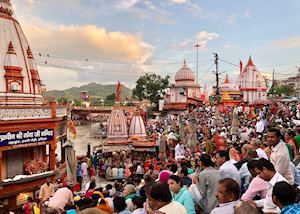 For a city focused on death, there’s a surprisingly celebratory atmosphere. At sacred towns like Haridwar and Rishikesh you can join in the evening riverside puja (prayers), but in Varanasi it’s best to take to the water and watch from a boat.

From the comfort of your boat, you can see oil lamps floating down the river, monks raising larger flaming lamps to the sky (to commune with the gods) and the lighting of cremation pyres.

It’s worth coming back to the ghats in the haze of the early morning, when you can take a private boat ride alongside them, from Asi, the farthest upstream ghat, to the downtown steps near Malviya Bridge. In the calm of dawn, you’ll see people bathing in the water, an act believed to bring about rebirth and purity. You might also spot rare Ganges River dolphins.

Almost every nook of the city is sacred, from Lolark Kund, a tiny stepwell where women perform fertility rituals, to the temple of Sankata Devi, the goddess of trouble and destroyer of sorrow. It can be tricky to interpret the importance of the many sites, so we suggest arranging a guided tour.

With expert guidance, you can visit the enigmatic Aghor Ashram, a school of tantric Hinduism that worships Bhairava (Shiva in a guise considered to protect his devotees from greed, lust and anger).

Local insight is also helpful if you’d like to visit Kashi Vishwanath, the holiest temple in a city of holy temples. Its current incarnation took shape in 1776, covered in 800 kg (1,750 lbs) of gold. Non-Hindus are welcome on the promise they’ll observe a few temple rules, including a camera ban.

Varanasi’s religious importance is intertwined with its scholarly history — millions of people come to study there each year. Jyotish (astrology) is an important facet of Hinduism, and it’s widely believed that the best astrologers are in Varanasi.

Hundreds of temples offer readings (ask for a recommendation from your guide), but be prepared for a lengthy discussion (and you’ll need to know the exact time and place you were born).

It’s generally best to go to Varanasi from October to March, when the weather is dry, sunny and warm. December and January can be cool, requiring extra layers in the evenings. April and September are good-value months to travel, when the weather is a little more humid, and clouded by the occasional shower. It’s best to avoid Varanasi from June to August, when heavy rains can flood the river. While flying in and out of Varanasi is very convenient, fog is common in this region and occasionally flights can be disrupted.

Our itineraries will give you suggestions for what is possible when you travel in Varanasi, and they showcase routes we know work particularly well. Treat them as inspiration, because your trip will be created uniquely by one of our specialists.

We’ve selected a range of accommodation options for when you visit Varanasi. Our choices usually come recommended for their character, facilities and service or location. Our specialists always aim to suggest properties that match your preferences.

Our specialists seek out authentic ways to get to know the places that could feature in your trip. These activities reflect some of the experiences they've most enjoyed while visiting Varanasi, and which use the best local guides.