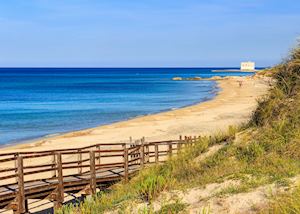 At the nearby archeological Park of Egnazia you can see the ruins of an ancient town Egnazia. The area was first settled in the Bronze Age, became an important trading hub in Roman times and then the early bishopric of Egnazia Appúla.

The city was eventually abandoned in the Middle Ages and much of its stone reused as building materials, but the extent of the ruins give a good impression of the city’s earlier importance.
Around the town, the low hills are blanketed in olive groves. In their midst is the Museum of Olive Oil, set in a 12th-century masseria (fortified farmhouse) that was a former Benedictine monastery.

April to June and September to November are excellent times to visit Fasano if you plan to explore the surrounding area rather than simply sit on the beach. The weather is warm and dry and the town is lively without being crowded. July and August are busier and temperatures rise to 34C (94F). Come in late June to see the annual La Scamiciata festivities.