The heart of Sorrento is a warren of little streets flanked by numerous churches, beautifully restored 19th-century townhouses and palaces, and quaint trattorias. At its heart is Piazza Tasso, a hub of activity with many lively bars and restaurants lorded over by the elegant Palazzo Correale with its beautiful majolica courtyard. From here you can veer off and explore the narrow alleyways now lined with cafés and boutiques selling local produce, such as limoncello and linen clothing. Don't miss the 14th-century Church of San Francesco, one of Sorrento's most beautiful, with its tranquil cloister showcasing a variety of architectural styles. 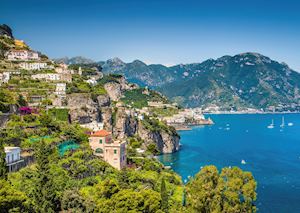 The chic and wonderfully scenic island of Capri is just a 45-minute hydrofoil ride from Sorrento. A popular destination for celebrities, politicians and the wealthy for centuries, Capri is a decidedly glamorous spot and the best place to soak up the atmosphere is with a coffee or an ice cream under the clock tower on the bustling central square or Piazzetta. From here you can wander the narrow streets, enjoy some shopping in the designer boutiques, take in the spectacular views from the Augustus Gardens, go on a coastal hike, or simply sit and have a long lunch in the sunshine.

Our expert guides to exploring Sorrento

Written by our specialists from their own experiences of visiting Sorrento, these guides will help you make the most of your time there. We share both our practical recommendations and the best ways to appreciate Sorrento at its best.