Driving through the countryside of northern Puglia’s Valle d'Itria, you pass low-slung whitewashed dwellings capped by conical stone roofs. These cone-shaped building, known as trulli, are Puglia’s signature construction, a design first thought out in the Bronze Age that lasted beyond the Middle Ages.

Puglia’s trulli mostly cut lone figures, glimpsed across an olive grove or vineyard, or passed by at the roadside. But in one place, Alberobello, waves of their cone roofs create a rippling skyline in the middle of town. Under the Counts of Conversano, Alberobello became a trulli-building boomtown that lasted from the 14th–18th centuries. More than 1,600 trulli still stand, including some of Puglia’s oldest.

On the outskirts, Alberobello could be any commonplace Italian town. You only notice the trulli when you hit the central thoroughfare, Largo Martellotta, and its succession of bars, restaurants and gelaterias. The trulli radiate from here, spreading out on one side into the Rione Monti district. 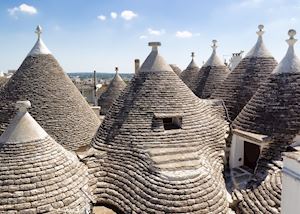 In Rione Monti, trulli line the cobbled lanes that climb to the top of one side of the town. Any route you choose will eventually lead you to a plateau where Alberobello’s trullo church presides over the town beneath it. You can wander into the Chiesa Sant'Antonio, which sports its own trullo-styled bell tower and central dome, whose underbelly you can see in the cool, spare interior.

Many trulli here are outfits for peddling souvenirs, fast food and even paid views. There are also some excellent restaurants, serving orecchiette (‘small ears’, because of their shape) pasta and other deceptively simple local dishes. You can exchange your Euros for anything trulli-related: miniature ceramic models, fridge magnets, and trullo nativity scenes. This area, though undoubtedly scenic and worthy of the town’s UNESCO-protected status, is also relentlessly commercially minded.

Cross the main street, and you enter a very different version of the town. The Rione Aia Piccola is the town’s residential trulli district, where people sun themselves in squares and shops sell groceries and other local necessities.

Surprisingly overlooked, it sees a fraction of the foreign footfall of the Rione Monti and has none of the blatant commercialism. You can stroll, in no particular direction, down residential lanes of trulli, peering down dead-end side alleys where sunflowers and marigolds grow in pots and bunches of onions hang drying against the trullis’ brilliantly white walls.

The Rione Aia Piccola is a refreshingly quiet way to take in the trulli unfettered. It has few designated attractions, but it does claim the town’s only double-story trullo, Trullo Sovrano. This former priest’s home is now a museum dedicated to the trullo way of life.

And, at the edge of the Rione Aia Piccola, you can look across at the sea of Rione Monti’s trulli as it rises up the hill and see the scale of trulli building that exploded in Alberobello during medieval times.

The trulli roughly follow the same design: a dazzling whitewashed base topped with a cone of mortar-free stone tiles laid horizontally in ever-decreasing circles. Cooling in summer, and holding their heat in winter, the trulli are thick-walled with few windows.

Some of the roofs bear a white painted symbol. They’re laced with meaning that can be rooted in Christian or pagan beliefs. You’ll see arrow-pierced hearts, the male and female symbols, and suns and moons. Some shops fashion the symbols into their crafts and will explain what they mean in exchange for you browsing their wares.

The trulli attract visitors year-round, most especially in July and August, when the town can get very crowded, at least by Puglia standards. We suggest visiting between April and June or in September and October.

This sample itinerary will give you an idea of what is possible when you travel in Alberobello, and showcases routes we know work particularly well. Treat this as inspiration, because your trip will be created uniquely by one of our specialists.