Less visited than some of the towns in the region, Ragusa's historic core is a patchwork of elegant town houses, ornate churches, bench-lined squares, stylish shops and restaurants. Set on a hillside, steep steps link the narrow, winding streets and their extravagant palazzi and tranquil chapels.

The town's most famous landmark is the cathedral with its three-tiered façade facing a handsome sloping square. Somehow calmer, more fashionable and more exclusive than its neighbors, Ragusa makes a marvelous place to stroll, allowing you to discover chic boutiques, shady gardens, medieval churches and Michelin-starred restaurants. 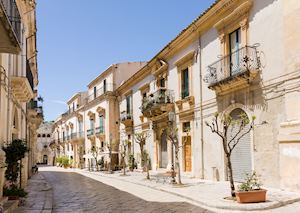 Noto is nothing less than a meticulously planned Baroque masterpiece. Rebuilt in an ebullient style from the local honey-colored tufa stone, it's a particularly atmospheric place.

The main street, Corso Vittorio Emmanuele, is a grand thoroughfare lined with lavish palazzi and sumptuous churches, including the impressive Duomo, which has recently been restored.

This sample itinerary will give you an idea of what is possible when you travel in Ragusa, Modica & Noto, and showcases routes we know work particularly well. Treat this as inspiration, because your trip will be created uniquely by one of our specialists.