A dramatic coast road winds around precipitous cliffs, past terraced vineyards and picturesque towns that tumble down to the turquoise sea on the Amalfi Coast, one of the most beautiful stretches of seafront in Europe. It's also a UNESCO World Heritage Site, covered with art and architecture of international importance, and this combination of natural beauty and historic significance make it a beguiling destination to explore. Visit the clifftop town of Ravello, a former artists' enclave, and small, brightly-painted Positano, the coast's most photogenic town.

Time slows on the elegant Amalfi Coast. It’s not a place for strenuous activity. Instead, admire the views from clifftop towns overlooking the sea, walk coastal paths and enjoy a gelato in Positano.

Things to see and do on the Amalfi Coast 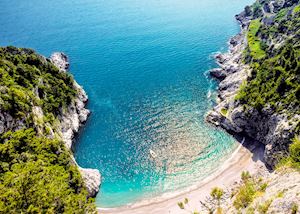 Standing almost upright on a cliff’s edge, this multi-hued town is the coast's most romantic. A patchwork of small houses painted in warm tones plunges down the steep hillside in a warren of narrow winding streets and numerous flights of steps. It's a town best explored on foot and as you walk past vividly-painted houses and shopfronts, small boutiques and terraced restaurants, you'll be greeted by glimpses of the yachts and fishing boats moored below. Positano has become a haven for wealthy Italians and is an expensive destination, but it's not overly crowded and its views are spectacular.

In the heart of Positano, overlooking the sea, sits the relatively small but exceedingly grand, domed church of Santa Maria Assunta. Through the imposing doors you can view the Byzantine icon of the Madonna, who has supposedly watched over the town since its foundation. Legend has it that a Turkish ship ran aground here and the captain heard a painting of the Virgin Mary whisper, 'Posa, Posa' (Set me down). He threw the painting overboard and the town was built where it washed ashore.

Shopping in the boutiques

One of the greatest joys of a visit to Positano is simply wandering its winding streets, strolling below a canopy of bougainvillea and browsing in the many boutiques that line the charming alleyways. The town is known for its unique style of clothing and you'll find plenty of small shops selling lovely linen garments, vivid local artworks, ceramics, lace and a variety of local produce made from lemons, the most delicious regional speciality. 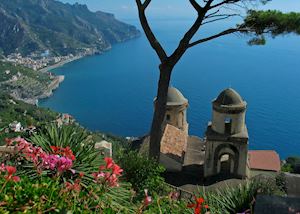 This refined village retreat located high in the mountains above Positano has long been popular with authors, celebrities and composers, including Wagner, Graham Greene and Virginia Woolf. D.H. Lawrence wrote part of Lady Chatterley’s Lover here and the Wagner connection is celebrated with an open-air opera festival every summer. Situated at the end of a windy, cliff-hugging road, Ravello is a lively village, and although almost entirely devoted to tourism, its enchanting streets, grand villas, beautiful churches and gorgeous gardens make it well worth the effort to get here.

Located in the main square and founded in 1086, the Ravello Cathedral dominates this small hillside town. The building has changed considerably in the intervening years and displays additions and renovations in various architectural styles, but its large ornate bronze doors date back to the 12th century. Inside you'll find an imposing pulpit intricately decorated with mosaics and supported by six spiraling marble columns set on top of prowling lions. The Piazza itself is a hub of activity and a wonderful place to linger in a little restaurant or enoteca (wine bar) at night.

Built by the wealthy Rufolo family in the 13th century, the Villa Rufolo and its cascading gardens are Ravello's main landmark. The villa's cloister and soaring 14th-century Torre Maggiore are particularly impressive, but it's the view from the meticulously planned gardens that are the real attraction. Wagner was so impressed when he visited in 1880 that he was inspired to set part of his opera Parsifal here. Ravello's annual classical musical festival is now staged in the gardens against the backdrop of exquisite views.

Arguably Ravello’s most well-known attraction is the grand Villa Cimbrone, which is just a ten-minute walk from the central square. This 11th-century mansion is now a chic hotel, which still offers all the glamour and romance that made it a first choice for Greta Garbo, Virginia Woolf, E. M. Forster and Sir Winston Churchill. The gardens are an attraction in their own right and offer sweeping views of the coast.

This sample itinerary will give you an idea of what is possible when you travel in the Amalfi Coast, and showcases routes we know work particularly well. Treat this as inspiration, because your trip will be created uniquely by one of our specialists.

Map of the Amalfi Coast

Places near the Amalfi Coast

Photos of the Amalfi Coast

Our expert guides to exploring the Amalfi Coast

Written by our specialists from their own experiences of visiting the Amalfi Coast, these guides will help you make the most of your time there. We share both our practical recommendations and the best ways to appreciate the Amalfi Coast at its best.

Accommodation choices for the Amalfi Coast

We’ve selected a range of accommodation options for when you visit the Amalfi Coast. Our choices usually come recommended for their character, facilities and service or location. Our specialists always aim to suggest properties that match your preferences.

Ideas for experiencing the Amalfi Coast

Our specialists seek out authentic ways to get to know the places that could feature in your trip. These activities reflect some of the experiences they've most enjoyed while visiting the Amalfi Coast, and which use the best local guides.