With its pavement cafés and gelaterias, easy-going atmosphere and strolling visitors, Otranto is a pleasant destination, further enhanced by the surrounding crystal-clear waters. On a fine day you get far-reaching views across the Adriatic to Albania.

The oldest part of Otranto is the walled medieval quarter that provides sweeping views of the sea. Its narrow, twisting streets are lined with restaurants, cafés and shops, while the waterfront hosts seafood restaurants and more cafés. 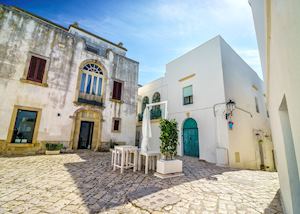 Well-preserved Byzantine, medieval and 16th-century frescoes line the walls but the highlight is the vivid, 12th-century floor mosaic that covers the entire nave, sanctuary and apse. It depicts pagan and Christian scenes, biblical characters and a tree of life.