An island brilliantly evoked by novelist Elena Ferrante, Ischia has a languid, old-world charm that makes it a tempting alternative to its showier cousin Capri. The pace of life is slower and long-time visitors come to relax in the thermal spas, laze on the sandy beaches and stroll through its lush gardens. You can hike through chestnut forests and vineyards to the island’s highest point, sip coffee in a tranquil square overlooking the waterfront or wallow in bubbling rock pools. Just don’t leave it too long, the popularity of Ferrante’s novels and the subsequent HBO series means Ischia won’t remain undiscovered for long.

Things to see and do in Ischia

A volcanic outcrop in the Bay of Naples first settled in the Bronze Age, Ischia’s strategic position made it a target for settlers and invaders throughout the course of its history. Everyone from the Greeks and Romans to Barbary privateers and Bourbons left their mark here.

The island’s 103 volcanic springs were another draw, providing respite for the infirm and incurable over the centuries. Today, many of the island’s hotels have thermal spas on site and the number of wellness facilities is growing — visitors can choose to relax in sleek, contemporary spas as well as natural hot pools by the sea.

Set around a horseshoe-shaped bay on the island’s north coast, Ischia’s main town is awash with small, pastel houses, flower-strewn balconies, beachfront trattorias and lively bars and restaurants. Its most obvious feature, however, is its formidable Aragonese castle, which is set on a rocky islet accessed by a causeway in Ischia Ponte, the older part of town. You can wander through the rooms of this medieval fortress, learn about its history in the small museum and stop for a drink at the rooftop terrace bar, which offers sweeping views across the bay toward Naples and the Sorrentine Peninsula.

Ischia’s second biggest town, Forio is best known for its network of historic streets, and its choice of spas and gardens. Among the best of the botanical offerings is La Mortella, former home of British composer William Walton and his wife Susana. Acknowledged as one of Italy’s finest botanical gardens, with a collection of rare and exotic plants, it plays host to intimate summer concerts.

Among the thermal baths, Poseidon is Ischia’s largest and best-known thermal complex, with over 20 pools, a private beach and lush gardens. The Negombo Thermal Gardens in nearby Lacco Ameno has 12 pools with different temperatures.

On the south coast, the main draw is the traffic-free town of Sant’ Angelo. A chic village of whitewashed houses clinging to steep cliffs, its streets are lined with ceramic shops, trattorias and gelaterias. The beach in town is relatively small, so it’s worth hopping into a boat-taxi for the short trip to nearby Maronti beach, one of the island’s best. Or you can join the locals and head to Sorgeto Bay to the west, where you can clamber down a series of stone steps to a quiet bay with rock pools filled by thermal springs.

Away from the coast, Ischia remains a staunchly traditional place with tiny villages scattered among chestnut-and-pine forests, old vineyards and dusty white tufa. At the island’s heart, you’ll find Monte Epomeo, a dormant volcano that rises to 789 m (2,600 ft). An hour’s hike from Fontana takes you to its summit for sweeping views of the Bay of Naples. Reward yourself with a stop for a lunch of rabbit stew on the terrace of La Grotta da Fiore, a tiny, family-run restaurant carved into the soft limestone hillside — its terrace offers a good place rest and enjoy the view.

The best time to visit Ischia is between April and June or September and October when the weather is warm and dry but not too hot and the summer crowds have either yet to arrive or have already departed. July and August see floods of domestic visitors and the island gets very busy, while many hotels, guesthouses and attractions close in the winter months. 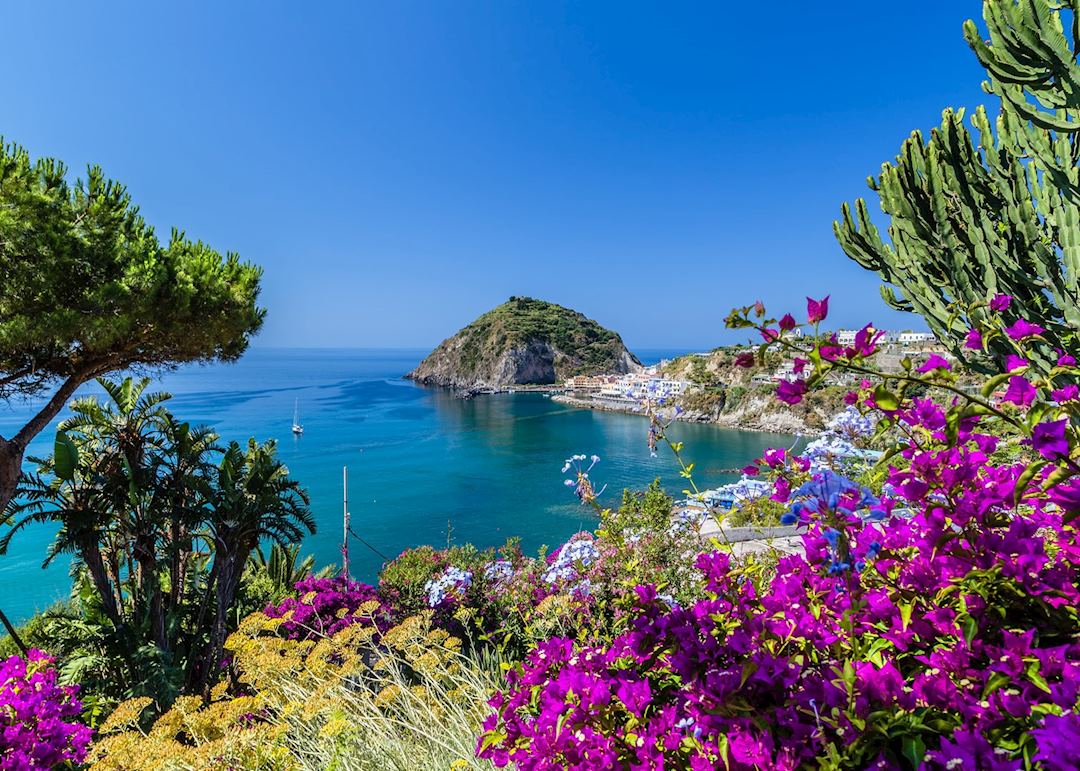 Start planning your trip to Ischia

We’ve selected a range of accommodation options for when you visit Ischia. Our choices usually come recommended for their character, facilities and service or location. Our specialists always aim to suggest properties that match your preferences.

Our specialists seek out authentic ways to get to know the places that could feature in your trip. These activities reflect some of the experiences they've most enjoyed while visiting Ischia, and which use the best local guides.