A near mythical place that has attracted emperors, artists, poets and revolutionaries for centuries, Capri is by far the most beautiful island in the Bay of Naples. Brightly painted towns littered with grand mansions tumble down hillsides, azure seas lap secluded coves and an array of chic hotels and designer boutiques cater for the numerous celebrities, politicians and wealthy elite who like to linger here. Although extremely busy in July and August, venture beyond the main attractions and you'll discover winding alleyways, Roman ruins and a hidden charm that ensures visitors return again and again, every visit more lengthy than the last.

Capri is undeniably the most glamorous place on the Amalfi Coast. But beyond the yachts, boutiques and busy marinas, you’ll find dramatic cliffside hiking trails, stately Roman villas with a view, and hidden sea grottoes.

Things to see and do in Capri

Small but extremely fashionable, Piazza Umberto, or La Piazzetta as it’s known locally, is the heart of Capri town and the main hub of the island. Wicker chairs and tables take up most of this former market square and a visit to the island wouldn’t be complete without sipping a coffee or a cocktail in one of its cafés and just watching the world, and perhaps the odd celebrity, go by. A former cathedral with an imposing clock tower, the town hall and several restored palaces flank the square, while narrow shopping streets lined with exclusive boutiques and lively restaurants lead off its sides.

Take a private boat trip around the island or visit Positano

Capri's magnificent scenery is best revealed on a private boat trip from the marina. Skirting rugged cliffs to hidden coves, stopping in clear waters for a swim and discovering the many vibrant grottoes carved into the cliffs reveals the island's beauty and character in a way that's impossible on land. You can also choose to sail over to picturesque Positano for lunch and spend a few hours walking around this photogenic town, up and down the many steps, enjoying a spot of shopping as you go or stopping for a drink with a glorious view.

Stroll through the Augustus Gardens and enjoy the view 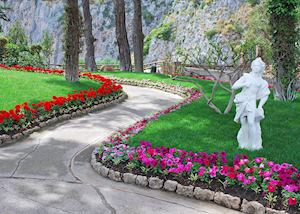 Just a short walk along winding streets from Piazza Umberto, you will find the tranquil Augustus Gardens, which rise in a series of manicured flowering terraces to a dramatic viewpoint. The panorama includes sweeping views of the bay and the Faraglioni, three striking sea stacks. The gardens make a wonderful escape from the crowds, especially in the early morning or late evening, and showcase a wide variety of ornamental plants and flowers. You'll also find a monument to Lenin who visited in 1908 and on the other side of the gardens, the precipitous Via Krupp, which winds down the cliffside to Marina Piccola in a series of dizzying switchbacks.

Hike along Capri’s coastline on the Path of the Forts

The Sentiero dei Fortini, the Path of the Forts, is a dramatic coastal path stretching along the west coast of the island from the Grotta Azzurra, the Blue Grotto, to Punta Carena. The route takes three to five hours to complete and passes a series of deep, fjord-like bays, rocky promontories and three imposing forts that were originally built to defend the island from Saracen attacks, and then later fortified by the British and French during the Napoleonic wars. At the end of your walk you can take a refreshing swim in the sea below the lighthouse at Punta Carena.

Anacapri and the chairlift up to Monte Solaro

Set on the slopes of Monte Solaro, Anacapri is the island's second town, offering a quieter, more authentic village experience than glitzy Capri. The narrows streets have more traditional shops, old ladies sit on their front steps watching people pass by and little vegetable plots are squeezed in between the tiny houses. Apart from wandering the tranquil streets the main attraction here is the chairlift to the summit of Monte Solaro, the island's highest peak. The tranquil journey takes just 13 minutes and you'll be rewarded with sweeping views that take in the entire Bay of Naples, the Amalfi Coast and Ischia.

Our itineraries will give you suggestions for what is possible when you travel in Capri, and they showcase routes we know work particularly well. Treat them as inspiration, because your trip will be created uniquely by one of our specialists.

Our expert guides to exploring Capri

Written by our specialists from their own experiences of visiting Capri, these guides will help you make the most of your time there. We share both our practical recommendations and the best ways to appreciate Capri at its best.

We’ve selected a range of accommodation options for when you visit Capri. Our choices usually come recommended for their character, facilities and service or location. Our specialists always aim to suggest properties that match your preferences.