It is a mystery as to why a settlement was ever made here: there are no rivers or local sources of water, and no evidence that they once existed. One of the features of Uxmal are the Mayan chultunes — or cisterns — which held water for the population to live from. Chaac, the rain god, features prominently in much of the architecture's carvings — no doubt an important source of water for these people. 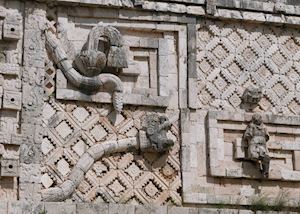 Uxmal is a delightful archaeological site to experience, the ancient city is a half-square-mile set in rich green fertile land which provides a perfect setting for some of the most magnificent ancient pyramids, buildings and temples of the ancient world. You can sense the history here as you walk around and gaze at the stunning architecture and majestic layout of this ancient city.

The restored buildings include the curved Piramide del Adivino (Magician's Pyramid) which stands majestically above the other buildings, the palace façade of El Palomar (Dovecote) that is illuminated at the spring Equinox and the Cuadrangulo de las Monjas which if you climb up its central steps you will see the spectacular views of the complex.

This sample itinerary will give you an idea of what is possible when you travel in Uxmal, and showcases routes we know work particularly well. Treat this as inspiration, because your trip will be created uniquely by one of our specialists.

Our expert guides to exploring Uxmal

Written by our specialists from their own experiences of visiting Uxmal, these guides will help you make the most of your time there. We share both our practical recommendations and the best ways to appreciate Uxmal at its best.