The blue-washed buildings of Chefchaouen are an arresting sight amid the rust-red Rif Mountains and dusty-green scrubland of northwest Morocco. Compact and relaxed, the city is a convenient stop between Fez and Tangiers, and the photogenic old town is an easy place to while away a day wandering through the narrow streets, either with a private guide or on your own.

The town’s bright-blue buildings are mostly in the medina, a small knot of steep cobbled alleys that twist and wind their way up a hill. As you stroll through, you’ll discover Andalusian arches and hidden streets and improbable dead-ends. It’s small enough that you won’t get too lost, but dense enough to occupy a whole day if you’d like. 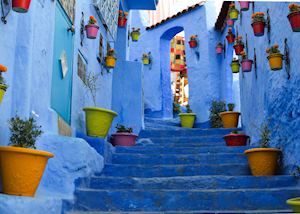 There’s much debate as to why the locals have painted their city blue. Some say the residents use the paint for its theoretical ability to repel mosquitos, while others attribute the tradition to an influx of Jewish refugees fleeing from persecution during the Spanish Inquisition (or from the Holocaust). Whatever the reason, most of the homes and shops here range from a blue-white to an intense indigo, earning Chefchaouen the nickname the ‘Blue Pearl’.

The medina is also packed with artisans selling traditional wares. You’ll find Berber necklaces and bracelets displayed on the walls of narrow staircases and bright Moroccan slippers arrayed on small tables tucked into doorways. Weavers hang wool blankets, hats, shawls and rugs on walls and over windows in the lanes, or fold them neatly on tables in squares.

Because it’s so camera friendly, the city has begun to attract more visitors, so we suggest waking up early to enjoy the streets in relative quiet.

The city’s central square is Outa el Hammam, a cobbled, tree-lined plaza dominated by the red mudbrick kasbah. Built in the 15th century, it has since been heavily restored. Today, it houses an ethnographic museum, where you can explore Chefchaouen’s history and culture through exhibits of pottery, photographs and weapons.

You’ll also see historical examples of the traditional Riffian clothes that some of the local women still wear: a red-and-white striped overskirt and a wide straw hat decorated with wool bobbles.

A climb to the top of the fortress gives you views over the city’s red-tiled roofs. If you venture down into the basement, you’ll see the dungeon and the prison cells where the Spanish imprisoned Abd el-Krim, a local military leader during the Rif War in the 1920s.

Along the river, you might see locals doing their laundry in the water, either on the stony banks or in purpose-built covered areas with corrugated washboards for scrubbing the wet clothes.

Outside the medina walls, to the northeast, the river tumbles out of the Rif Mountains as a small waterfall, where villagers gather to cool off and wash clothes during the hottest days of the summer.

Because it’s in the mountains, Chefchaouen has a cooler climate than many parts of Morocco. Temperatures are most comfortable in the spring (March to May) and autumn (September to October). 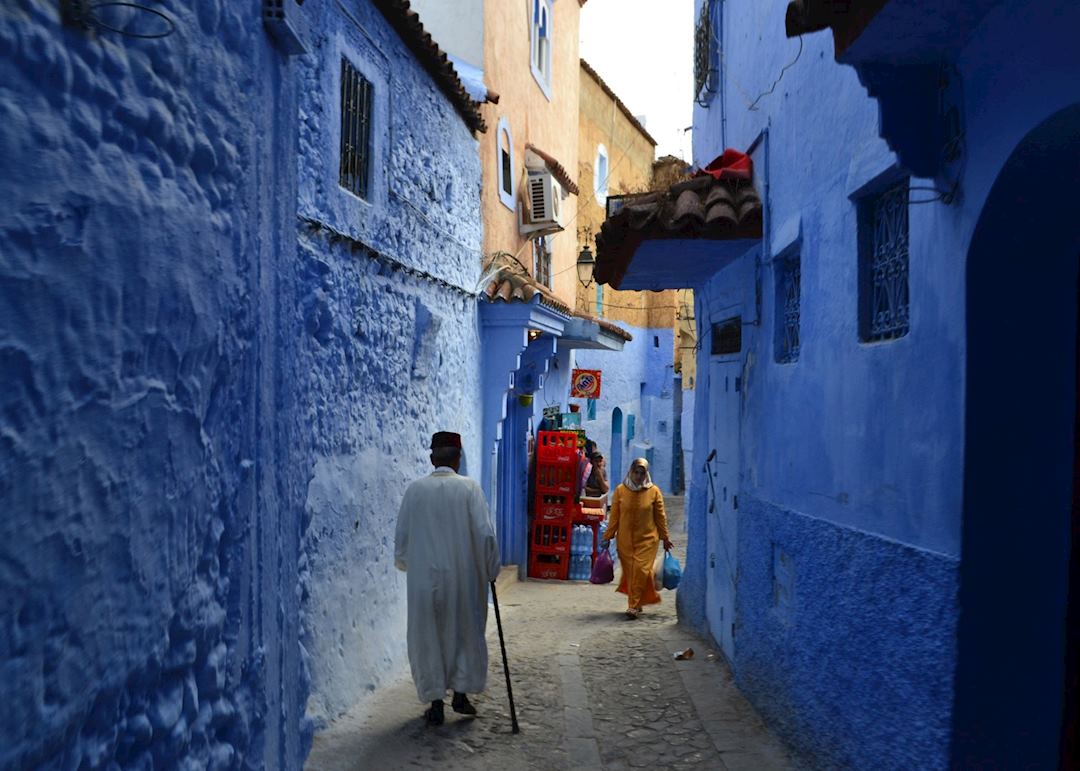 Start planning your trip to Chefchaouen