Sitting on the marine-trade route between India and China, Phuket is a medley of the Chinese, Malaysian, Indian and Thai cultures that have left their mark on the island. Tin mines and rubber trees once brought inhabitants their fortune. Thanks to the pull of its congenially laid-back beaches and clear waters, it’s still the richest area of Thailand.

Linked to the Thai mainland by a narrow causeway, Thailand’s largest island is peppered with high-end wine bars, smart restaurants, and hotels ranging from the luxurious to simpler properties. The long swathes of beaches are interspersed with limestone cliffs and groves of mangrove trees. It can be quite commercial but there are still lesser-known areas to explore.

Personally, I love the less visited white-sand beaches of Phuket’s northwest. Add in the proximity to the nearby paradise islands of Phang Nga Bay and a trip to Phuket never disappoints.

Things to see and do in Phuket

Phuket town’s wide selection of rustic food courts, side-street stalls and markets make it a hot-spot for local delicacies. Many stalls have been run by the same family for generations, their ancestors bringing dishes from India, China and Malaysia. With a local guide you can sample a variety of specialities and learn how dishes have been adapted to absorb Thai ingredients and influences.

Moo ping (marinated grilled pork), eaten straight off the skewer, is a popular local choice. It’s served alongside a variety of barbecued sausages and chicken satays. The haw mok are a surprise — looking like little custard tarts, they’re actually filled with crab or fish mousse and served with coconut milk, all neatly wrapped in a banana leaf.

You can delve further into the tastes of Phuket by taking a cooking lesson. The Blue Elephant cooking school is one of the best, running half day courses. Beginning in the local market, you’re first introduced to the herbs, vegetables and meat that are key in Thai cooking before heading to the Blue Elephant’s ultra-modern kitchen to begin crafting a four-course meal.

You’re taught to make modern creations like crispy crab soufflé alongside more traditional dishes such as pomelo salad — made from a large fruit related to the grapefruit. On completing the course, you’re rewarded with the recipes to take home. 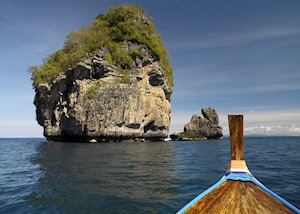 To the northeast of Phuket, the mangrove-topped limestone islands and sandy coves of Phang Nga Bay are best appreciated by sea. On a boat cruise around the bay you can sail among the pinnacles of rock that jut up out of the sea, a karst landscape created by the ocean gradually eating away at the soluble limestone.

You can also join a group on a junk (a traditional sailing boat) with flapping sails and a wooden sundeck. For a more exclusive experience, it’s possible to cruise on a private long-tail boat, a distinctive type of transport in Thailand. Phang Nga Bay can become saturated with other boats, but your crew can take you to quieter coves hidden among the cliffs.

A hundred years ago, Phuket attracted ambitious entrepreneurs from all over Asia, keen to make their fortune from tin mining. The rows of grand Sino-colonial (Dutch architecture with a Chinese influence) mansions in Phuket’s Old Town are proof that many realized their dreams. The area is compact enough to discover on foot, and amid the historic buildings are quirky cafés where you can try oliang — a Thai iced coffee made with condensed milk.

The Thai Hua Museum is a good option if you’re interested in learning more about the confluence of cultures on the island whilst the Phuket mining museum is a good excuse to explore the lavish Portuguese mansion it’s housed in. Visit on a Sunday and the Lard Yai, or ‘big market’ is open, showcasing everything from herbs and vegetables to fluorescent t-shirts.

Unwind on the beach

Phuket’s turquoise-blue water and long stretches of white sand framed by palm trees have earned it the status as one of the most popular beach destinations in Thailand. This does also mean it can be inundated with visitors. Head north to find a quieter side of the island, with more exclusive hotels and quieter beaches.

Surin Beach is one of the better public beaches, still maintaining more of a village feel. Some of the most luxurious hotels here have semi-private beaches — usually shared with another hotel — and staying at one is the best way to enjoy a peaceful beach stay.

Following the monsoon rains, the weather from October to April is cool and dry, with temperatures hovering around 25°C (77°F). Phuket is a popular choice over Christmas and New Year, when prices rise dramatically and the beaches are busy. The months of September and May can be a little rainy, but they’re worth considering for quieter beaches and better value for money. The months of July and August are best avoided, as this is when the monsoon rains disrupt ferry services to the island.

Our itineraries will give you suggestions for what is possible when you travel in Phuket, and they showcase routes we know work particularly well. Treat them as inspiration, because your trip will be created uniquely by one of our specialists.

We’ve selected a range of accommodation options for when you visit Phuket. Our choices usually come recommended for their character, facilities and service or location. Our specialists always aim to suggest properties that match your preferences.

Our specialists seek out authentic ways to get to know the places that could feature in your trip. These activities reflect some of the experiences they've most enjoyed while visiting Phuket, and which use the best local guides.