Your highlight of visiting Monterey might be sitting down to eat creamy clam chowder on Old Fisherman’s Wharf. Or spotting sea otters floating on their backs grooming themselves. Or, on a whale-watching trip, seeing a humpback flip its flukes right in front of your boat.

Following the curve of a peninsula along California’s Pacific Coast, Monterey has retained the feel of a small fishing town. Colonized by the Spanish in 1770 and once a hub for sardine canning, the city’s history can still be felt as you walk along Cannery Row, now transformed into a modern shopping street. You also get a sense for it as you stroll Old Fisherman’s Wharf with its brightly painted wooden buildings housing fresh seafood restaurants. 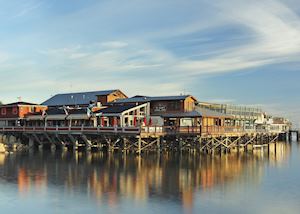 For a small city, Monterey offers plenty to do, making it a rewarding stop as you drive California’s Pacific Coast Highway. Attracting writers such as John Steinbeck and Henry Miller over the years, the city brims with character and a sense of history.

It was the site of the Battle of Monterey on 7th July 1846, during the Mexican-American War — the same day that California became part of the United States, marked by the raising of the US flag over the Monterey Custom House.

Browse the shops and galleries along Cannery Row, remembering that the buildings once housed sardine-canning factories that boomed during World War I and II. You can take a two-hour walking tour of the area with a local guide, who’ll tell you about the lives of those who worked here during the mid-20th century.

You can also join a walking tour that focuses on Monterey’s colonial history and adobe buildings. Or, follow the 3 km (2 mile) Path of History, marked up by yellow tiles, to take in the city’s most notable historic structures, such as the Spanish-colonial Royal Presidio Chapel, constructed in 1794. 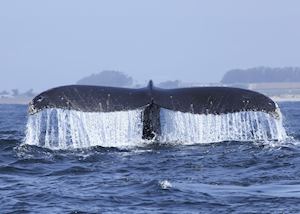 Visit Monterey between April and December and you have a good chance of seeing migratory humpback and blue whales. We recommend embarking on an intimate whale-watching trip led by experienced experts who can help interpret the whales’ behavior. Outside of this time, you can still see gray whales, orcas, porpoises and dolphins.

If you’re itching to get out and about, you could hire a bike from Fisherman’s Wharf and cycle along the coast, following the 4 km (2.6 mile) flat cycle path to Lovers Point Park. From the park’s namesake rocky point you can look back and take in views over Monterey Bay. The park also has a sandy beach that’s popular for swimming.

Alternatively, lace up your boots and hike some of the 11 trails at Jacks Peak County Park. Most are short walks that wind through pine trees and give you a chance to look for fossils from the Miocene epoch. As you hike, you can enjoy views over Monterey Bay, Carmel Valley and the Santa Lucia Mountains — the best are from the top of 325 m (1,068 ft) Jacks Peak.

You can visit Monterey at any time of year and enjoy mild temperatures, though expect cool ocean breezes. December to February see the most rainfall, and the summer months can become busy. For the best whale watching, visit between April and December.

This sample itinerary will give you an idea of what is possible when you travel in Monterey, and showcases routes we know work particularly well. Treat this as inspiration, because your trip will be created uniquely by one of our specialists.

We’ve selected a range of accommodation options for when you visit Monterey. Our choices usually come recommended for their character, facilities and service or location. Our specialists always aim to suggest properties that match your preferences.