The Hague, The Netherlands

Situated on the edge of a tree-lined park in the historic Lange Voorhout, the bright-yellow façade of the Hotel Des Indes offers only a hint of the grandeur inside. Originally built as a mansion to host private events for King Willem III, the building became a hotel in 1881.

Its extensive modern renovation has preserved some of its historical details, such as the large entrance that used to admit guests by horse and carriage, now a marble-pillared lounge with an opulent chandelier. The soft lighting of the Bar des Indes glows on the violet and bronze fixtures inside what were once the stables, and the windows there retain their original decorative glass. At the top of the grand staircase is a viewing gallery beneath a domed ceiling, where guests would be introduced at royal events. One wall is dedicated to signed pictures of the many luminaries who have visited the hotel since its beginnings.

The rooms are also lavish, decorated in classic ivory, gold and jewel tones with dark oak furniture and cushions in red and violet velvet. The hallways are painted with tulips, each one by a different local artist. The fine dining restaurant, also adjoining the hotel’s grand entryway, boasts high ornamented ceilings, crystal chandeliers, heavy silk curtains and lush red-cushioned seating.

We love this hotel for its ability to blend its history with modern luxuries. The original architecture is displayed throughout the hotel, yet the decor has been adapted to embrace modern comforts and styles.

The Hotel Des Indes has six categories of rooms and suites, though the Classic rooms are for single occupancy and too small for us to recommend. The Superior, Deluxe and Executive rooms are each larger than the last, while the Junior suites have separate lounge areas and larger windows offering a view into the heart of The Hague.

All rooms are decorated in a lavish style, some with high ceilings and chandeliers, curtain canopies over the beds and deep-red or violet walls in the bathrooms. En suite bathrooms, air conditioning and Wi-Fi come standard.

The Hotel Des Indes is situated at the end of the prestigious Lange Voorhout, an avenue locally known as one of the most beautiful in Europe. Just outside the old town of The Hague but right next to the Escher in Het Paleis, the hotel’s location keeps you away from the larger crowds but still close to the key sights of the city. The Mauritshuis, Binnenhof, Haagsche Bluf, Old City Hall, Royal Palace and Den Haag Centraal are all between a five and 15-minute walk away.

The hotel offers some wheelchair-accessible rooms, elevators, wide corridors and other accommodations for people with mobility issues.

The Hague and nearby places 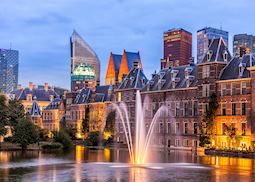