Snow-gilded mountains, steely grey fjords, a medieval fortress and modern-art museums, plus a busy fish market, all in Bergen.

Known as the Gateway to the Fjords, Bergen is perched on Norway’s southwest coast, backed by seven snow-kissed mountains and facing seven steel-grey fjords. Protected from the bitter North Sea by an island, it’s still one of the busiest and most important ports in Europe, giving it a vivacious atmosphere, especially in conjunction with the student population.

Though Bergen is one of Europe’s rainiest cities, residents relish time spent outdoors and it makes an excellent base if you want to adventure among the surrounding glaciers, mountains and fjords. We can also direct you to the city’s urban delights, including cobblestone lanes lined with brightly painted houses, a modern core graced with large, lively squares, and an ebullient fish market where you can sample the day’s catch.

The city’s exceptional museums showcase its history and cultural heritage. We can arrange guided tours that explore everything from the heady days of the Hanseatic League to the life and works of Romantic composer Edvard Grieg.

Things to see and do in Bergen

The city’s historic region of Bryggen is an inviting stretch along Vågen Harbour where you can see rose, mustard and white houses leaning against each other at somewhat drunken angles. Like many mostly wooden medieval cities, Bergen was plagued by fires, and this is the oldest swathe of buildings still standing. The area mostly dates to when the city was reconstructed after a scouring fire in 1702.

Today, Bryggen is protected as a UNESCO World Heritage Site and packed with both traditional and modern artisans. You can while away an afternoon admiring the postcard-worthy waterfront and popping into the workshops of local painters, weavers and other craftspeople.

Views from the Fløibanen funicular

The best-known of Bergen’s seven hills, Mount Fløyen offers sweeping views of the city and sea, as well as a variety of walking trails. You can climb the fairly steep slope, if you like, or ride the Fløibanen funicular, a century-old line with modern carriages that have glass roofs and sides so you can admire your ascent.

At the top, you’ll find a small café with freshly baked pastries and other treats, as well as a playground and a well-marked map of the surrounding paths. Following these paths, you might stroll through the Troll Wood, switchback your way down the hill to the town or hike to nearby Mount Ulriken. Some also lead to Lake Skomakerdiket, where you can paddle a canoe, or you can rent a mountain bike to take in more of the countryside.

Nestled among gardens on the rural shores of Nordåsvatnet, Troldhaugen is the chalet where composer Edvard Grieg spent his summers with wife Nina Hagerup until his death in 1907. The country’s best-known composer, Grieg’s wildly Romantic work built upon traditional Norwegian folk music, and helped to cement the country’s patriotic identity.

You can explore the lower floor of the chalet and peer inside the small shed overlooking the bay where he did his composing. It was from this restful scene of water, trees, sky and distant mountains that he apparently drew inspiration. There’s also a modern music hall called Troldsalen, whose large windows frame that same view, and where you can attend live performances.

One of Norway’s best-preserved stone fortresses, Bergenhus Fortress has guarded the mouth of Bergen Harbour since the 13th century. Adjacent, its contemporary sister building, Håkons Hall, is the largest secular medieval building still standing in Norway. Together with the 16th-century Rosenkrantz Tower, these three edifices formed the medieval heart of Bergen.

Stolid and plain-faced, the buildings’ unpresupposing stone façades encase fairly empty interiors, robbed of their various treasures by centuries of fire and mayhem. However, that absence conceals a long and compelling history — the earliest buildings in the complex date from the 12th century and the fortress saw active use as late as World War II. A visit to the site’s museum with a private guide can start to unlock its many stories.

A visit to the four buildings of the KODE Museums, standing on the shore of Lille Lungegård lake, offers a comprehensive introduction to Scandinavian arts and design. In KODE 1, you’ll find a focus on decorative arts, including Norwegian gold and silverware, as well as an extensive display of antiques. KODE 2 hosts a rotating set of exhibitions featuring Scandinavian artists since the 1980s.

KODE 3 is dedicated to the works of Edvard Munch, with one of the most comprehensive collections in the world. KODE 4 features European Modern work, including pieces by Miró, Picasso and an entire gallery of landscapes by Norway’s own Nikolai Astrup.

Scallops and shrimp and cod, oh my!

A Bergen staple since the 12th century, the Torget Fish Market is where fishermen and farmers have historically sold their wares to the city inhabitants — the current location has been in use since 1566. Nestled under bright-red awnings next to the waterfront, its most recent incarnation is less a local market than a charming tradition, but you can sample a wide variety of seafood here and vendors are happy to make a plate for you. Do be aware that many vendors also offer whale meat.

If you’d like to explore the market, we can arrange a gastronomic tour of the city that includes a stop here.

The fjords and mountains that surround Bergen make a veritable playground for anyone who wants to spend time outdoors, appreciating the rugged beauty of Norway’s western coast. We can arrange guided hikes up a glacier, as well as boat cruises to admire the fjords that make up the country’s fractal coastline and a chance to go fishing with a local guide.

The land here is richly fertile — a legacy of its volcanic past, and all along the coast you’ll find orchards that bloom into a pastel froth each spring, then blaze into bright autumnal foliage once the days begin to cool. Additionally, you can hike or ride the funicular to Mount Ulriken, the largest of the city’s seven hills, for a chance to hike or cycle.

The best time to travel to Bergen is between May and September. It’s the rainiest city in all of Europe, and you’ll need a waterproof jacket no matter when you visit. Usually the weather starts to improve in May and stays relatively fine until late September. The months of June, July and August are typically very busy in the city, but often experience the least rain. 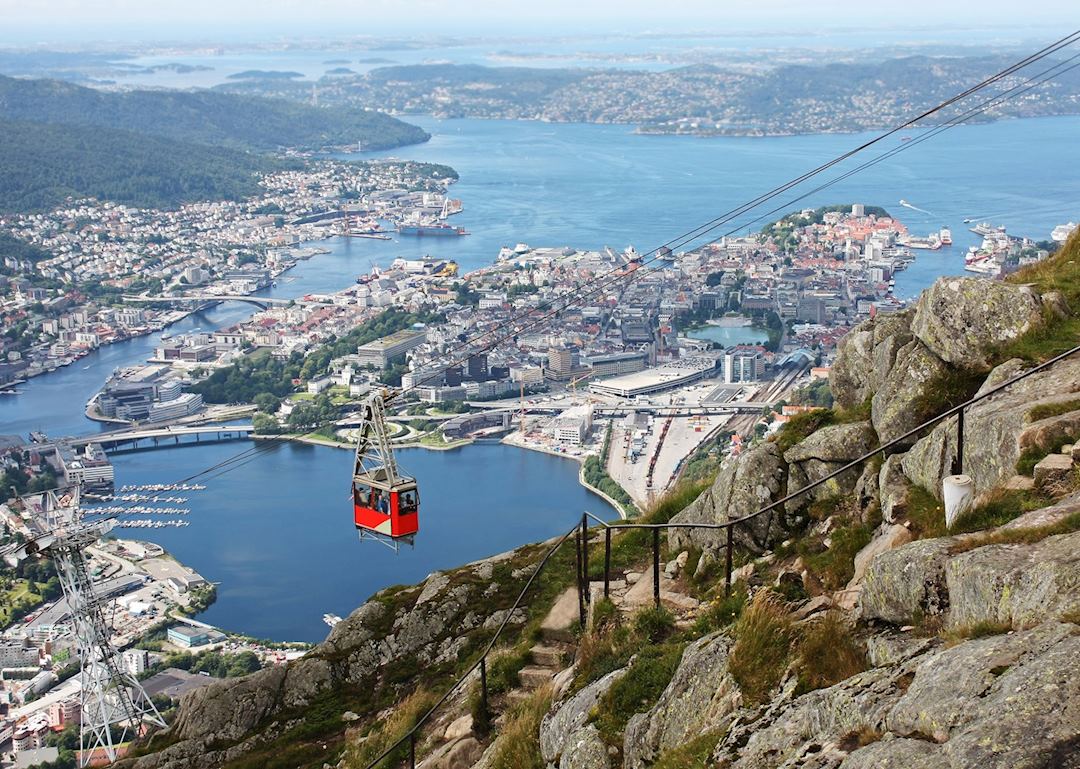 Start planning your trip to Bergen

We’ve selected a range of accommodation options for when you visit Bergen. Our choices usually come recommended for their character, facilities and service or location. Our specialists always aim to suggest properties that match your preferences.

Our specialists seek out authentic ways to get to know the places that could feature in your trip. These activities reflect some of the experiences they've most enjoyed while visiting Bergen, and which use the best local guides.