Known for its green attitude and vibrant coffee culture, Oslo is a cool, contemporary capital with a busy calendar of cultural events. A seaside city perched on the shore of a dark, glimmering fjord, it’s surrounded by mountains and boasts an archipelago of pristine islands. But don’t get distracted by the surrounding beauty — the city has plenty of attractions of its own.

You can visit a plethora of compelling museums that cover everything from Viking ships to local artists like Ibsen and Munch to the pursuit of world peace. You can visit grand buildings like the neoclassical Royal Palace and the ultra-modern Opera House, or spend your day strolling through the city’s parks and outdoor sculpture gardens.

You might take a guided tour on one of the islands, sample local treats on a culinary walking tour or watch someone make lefse (traditional flatbread) over an open fire. And families will probably want to visit the official office of Julenissen, Norway’s Christmas gnome.

Things to see and do in Oslo

One of the many museums on the Bygdøy peninsula, this open-air exhibit examines traditional houses and folkways from Norway’s history. More than 150 different houses, representing a wide swathe of the country’s long history, have been gathered from across Norway and reconstructed here. Highlights include a grand wooden stave church from the 13th century and a goahti, a conical Sámi construction made from turf.

Staff members wear traditional clothing and demonstrate historical skills — you might see a woman making Norway’s flatbread, lefse, on an open wood fire, or a shepherd tending a flock.

Close to the folk museum, the Viking Ship Museum is dedicated to the country’s Viking heritage. The displays feature mostly grave goods like twisted silver bracelets, coins with Arabic inscriptions, massive gold torcs, blown-glass beads and a brooch from Carolingia. The wide-ranging provenance of the items, raided or traded from as far away as North Africa, is indicative of the Vikings’ vast reach and wealth.

The real attraction here, though, is the trio of 9th-century longboats, uncovered from high-status burials in the late 19th and early 20th centuries. Likely ceremonial in nature, these richly carved ships are sweeping, commanding and remarkably reconstructed.

This small museum, also located on the Bygdøy peninsula, is dedicated to the oceanic adventures and fanciful theories of Norwegian explorer Thor Heyerdahl. In an effort to prove that South Americans could have populated the archipelago, Heyerdahl sailed across the Pacific from Peru to Polynesia in the balsa-wood raft Kon-Tiki.

He proved it could be done, and the adventure is lovingly documented in the museum (though scientists have roundly rejected his suppositions). The museum examines his 1947 voyage, as well as another in 1970 to cross the Atlantic, and includes the original craft.

More than 20 percent of Norwegians live in the capital, so it’s no surprise that the country’s cultural treasures are also concentrated here. You can visit the Oslo Opera house, which has become the hub of the burgeoning waterfront. A modernist marble masterpiece, its low, slanted lines make it look like a floating glacier.

Hosting rotating exhibitions in a stately railway station, the Nobel Peace Center promotes laureates and their ideals. A 15-minute walk from here gets you to the Oslo Cathedral, built in 1697. The highlight here is the glorious stained-glass windows, made by 20th-century artist Emanuel Vigeland. A different Vigeland, Gustav, created the sculptures that adorn his namesake park, which you can stroll when the weather’s fine.

The Royal Palace and Slottsparken

Built from pale-yellow stone, the neoclassical Royal Palace is a relatively modest 19th-century seat for the country’s various monarchs. It’s remarkably approachable, without the high fences and exhaustive security that barricade many other European monarchs from their subjects. The current king, Harald V, has recently made major updates that you can see on one of the tours the palace offers in the summer.

The Slottsparken (literally ‘castle park’) that surrounds the palace is rambling and naturalistic rather than manicured and stately. You can easily while away a morning strolling through its wildflower meadows and woodland arcades.

Island-hopping on the Oslofjord

The capital perches on the northern shore of the Oslofjord, whose blue-black water is scattered with green islands that are a veritable playground during the sunny summer months. Many locals come here to relax on weekends in their private cabins, which all adhere to a strict aesthetic code and are painted red, blue, green or yellow, making for postcard-ready photos.

If you’d like to explore the islands, we can arrange for scenic cruises from the waterfront as well as privately guided hikes and kayak trips, and stand-up paddleboarding lessons.

Though recent waves of immigrants have added some global spice to Oslo’s culinary scene, Norway’s traditional foods were defined by the country’s lengthy, fractal coast and long winters. There’s an emphasis on cheese, cured meats, fish and, of course, beer.

If you’d like to explore the city’s history through its food, we can arrange for a privately guided walking tour of the city’s historical sights and culinary hotspots. Stroll along cobblestone streets and beside the Akerselva River to hear stories from Oslo’s past while pausing to nibble on dishes like buttery fiskesuppe (creamy fish soup), kjøttkaker (meatballs) or lefse dipped in cinnamon and sugar.

The stalwart Akershus Castle and Fortress (Akershus Slott og Festning to locals) dates back to 1299, when Oslo became the country’s capital. It’s been updated over the centuries and there’s still an active military facility on the grounds, but the fortress’s green lawns are populated by residents who come to enjoy the sweeping views. Alfresco concerts are also held here during the long summer evenings.

You’re welcome to stroll around the ramparts — there are regular guided English-language tours. But for a chance to understand the historical context of the fortress, we suggest a privately guided tour of the city. In addition to Akershus, you’ll see the palace, the Parliament Building (Stortinget), the National Theatre and the City Hall.

Oscarsborg Fortress and the town of Drøbak

Located on two islands in the narrowest part of Oslofjord, Oscarsborg Fortress has been an important tactical fortification since the 1600s. In World War II, this is where Norwegian forces sank the German warship Blücher, a feat that saved the king and parliament from capture. (The operation is depicted in the 2016 war drama The King’s Choice).

The fortress is located in the summer town of Drøbak, known for its wooden clapboard buildings and a museum devoted to dried cod. It’s also home to Julenissen, the Norwegian version of Santa Claus. If you’d like to explore, we can arrange a privately guided tour of the fortress and town.

When to visit Oslo depends on what you want to see. Spring flowers bloom in the city’s many parks in April and May, when the summer crowds haven’t yet arrived. June and July are usually mild, the sun doesn’t set until 11pm and the calendar is packed with events. This can mean more visitors, though. August is often very busy. The weather cools and crowds thin out in September, but the weather remains pleasant, making it an excellent time to go if you don’t want to enjoy water sports. The first snowfall is usually in December, when Christmas markets and seasonal concerts attract more visitors. 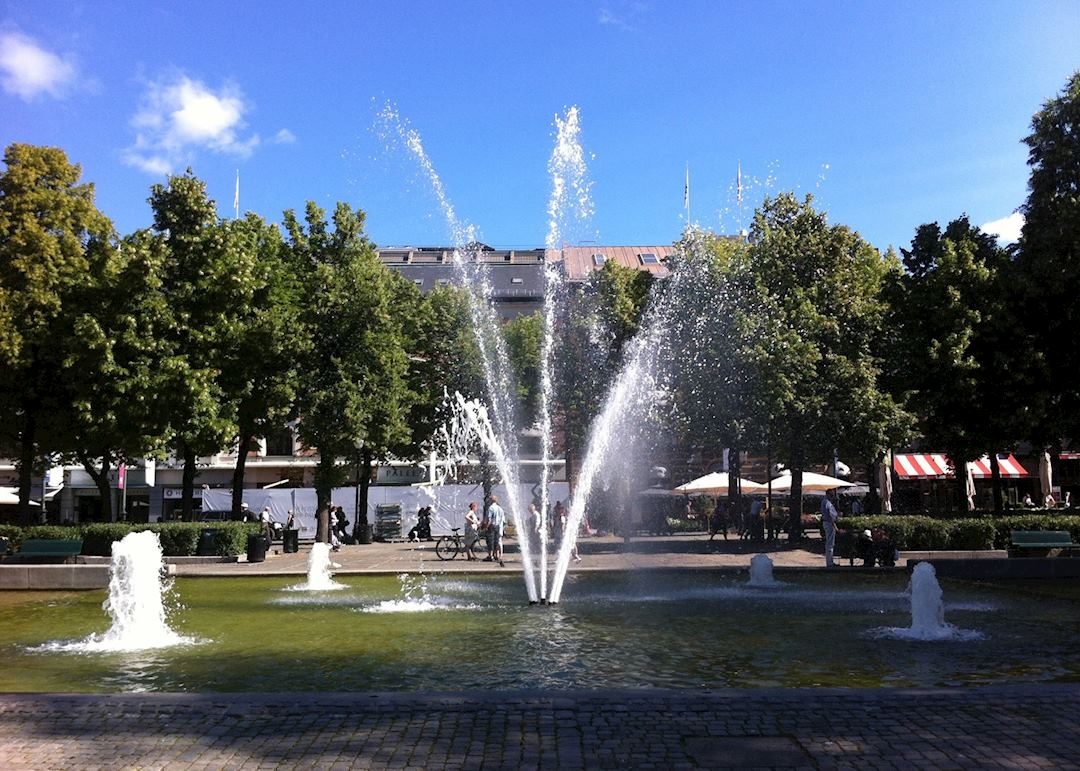 Start planning your trip to Oslo

We’ve selected a range of accommodation options for when you visit Oslo. Our choices usually come recommended for their character, facilities and service or location. Our specialists always aim to suggest properties that match your preferences.

Our specialists seek out authentic ways to get to know the places that could feature in your trip. These activities reflect some of the experiences they've most enjoyed while visiting Oslo, and which use the best local guides.