A tiny dot in the ocean set at the southern end of the chain of islands that make up Saint Vincent and the Grenadines, Palm island is a tropical oasis. Once known as Prune Island, it’s been re-named after the 2,000 palm trees scattered across the island. This small island doesn’t have an airport and is reached by a ten-minute boat ride from Union Island.

A relatively flat island, a small peak rises to the south and is framed by white sand beaches. Casuarina beach is the longest, edged with coconut and fringe palms. A popular beach with the yachting crowd, the laid-back beachside bar is open to day visitors. The rest of the island is private, only accessible to residents of the Palm Island Resort.

The island was leased by John and Mary Caldwell for US$1 a year from the government, on the stipulation that a resort was built on the island to provide employment for the locals. The resulting resort is a Caribbean hideaway with luxury rooms, a meandering pool and a relaxed ambiance. There are also a number of privately owned villas on the island which were sold to fund the building of the resort.

Exploring the nature trails criss-crossing the island is a great way to meet some of the island’s many iguanas, hummingbirds and hermit crabs. Land turtles have been introduced to the island from nearby Union Island and are thriving. Walk up the small peak and you’ll be rewarded with views across the Grenadine Archipelago.

Three healthy reefs frame the island, accessible by swimming from the beach or boat. The uninhabited sandbar islets of Mopion and Punaise are a short boat ride away for some of the best snorkelling in the area — eagle rays and manta rays regularly glide past. It’s also possible to visit Tobago Cays, arguably one of the best snorkelling spots in the Caribbean, on a day trip from the island.

Our itineraries will give you suggestions for what is possible when you travel in Palm Island, and they showcase routes we know work particularly well. Treat them as inspiration, because your trip will be created uniquely by one of our specialists.

We’ve selected a range of accommodation options for when you visit Palm Island. Our choices usually come recommended for their character, facilities and service or location. Our specialists always aim to suggest properties that match your preferences. 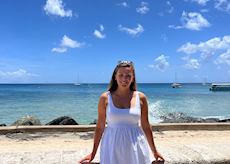