An early start will get you to Wat Pho in time to experience the monks' early morning chanting ritual and avoid the crowds who arrive later (chanting starts at 9am). After this uplifting and often private experience you will visit the temple grounds and the famous 45 metre Reclining Buddha. Later you will continue to The Grand Palace, Thailand's most important landmark, where you will be awed by the grandeur and majesty of the building and its throne halls. Then proceed to the Wat Phra Kaew to marvel at the mysterious Emerald Buddha, the most revered Buddha image in Thailand.

While the Temple of the Emerald Buddha and Grand Palace grounds are open every day when not being used for state functions, the audience halls in The Grand Palace are closed on weekends. You can only gain entrance to see the magnificent thrones on weekdays. The Royal Pantheon in Temple of the Emerald Buddha is only open one day a year, on 6 April.

Whilst much of Thailand has become accustomed to Western tourists, it is important to dress respectfully when visiting religious sites. In particular, The Grand Palace and Wat Pho in Bangkok have a very strict dress code and suitable attire must be worn. Shorts, flimsy or skimpy clothes such as tank tops or vests are strictly not allowed and shoulders and ankles must be covered. Closed shoes are preferred although sandals with socks are permitted and long trousers or skirts are deemed appropriate. It is also considered respectful to remove shoes and hats before entering a religious building.

Other experiences in Bangkok 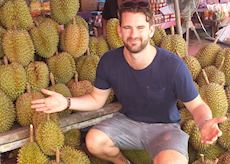