The Cayo District incorporates the beautiful forests of western Belize, centered around the town of San Ignacio, near to the border with Guatemala. 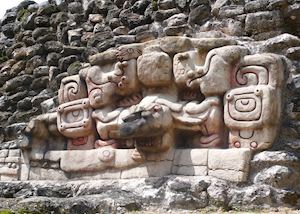 Caracol is the largest Mayan archaeological site in Belize. In 650 AD, the urban area of Caracol had a radius of approximately 10 kilometers around the site's epicenter. It covered an area much larger than present day Belize City and supported more than twice the modern city's population.

Sights include an astronomic observatory, five plazas and over 35,000 buildings. The loftiest among them is a massive pyramid capped by three temples that rises over 50 meters above the jungle floor.