The Jesselton opened in 1954 as the first hotel in Kota Kinabalu and was named after the city's original name by the then British Governor. Until Sabah's independence in 1963, the Jesselton was the discerning choice for visitors and many prominent figures such as Lady Mountbatten passed through during these times. The hotel is now Kota Kinabalu's only boutique property and the colonial style is still retained in parts, such as the grand piano in the Mountbatten Lounge and old prints of the city in the halls.

With just 32 rooms it retains a personal feel and although it does not have extensive facilities such as a pool due to its small size, the Bella Italia Restaurant is well priced (and a change from the Malaysian buffet food available in most jungle/island lodges) and the hotel serves a good à la carte breakfast. The Deluxe rooms are recommended as they are much larger than the Superior rooms and are perfectly comfortable for a few nights stay in the city. The location cannot be bettered if you would like to explore the city, shops and restaurants which are right on your doorstep. If you are here on a Sunday morning the lively Gaya Street Fair is right outside.

Our itineraries are there to spark ideas for how you could include a stay at Jesselton Hotel as part of your trip. Treat them simply as suggestions, because every aspect of the trip we create for you will be yours to define.

Kota Kinabalu and nearby places 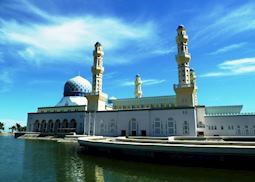