The little town of Churchill is situated in northern Manitoba on the edge of Hudson Bay.

This is an area of unique diversity where taiga, tundra, boreal forest and coastal estuary meet.

Established early in the 1700s the town grew into a prosperous trading post but declined in the 19th century when it was bypassed by faster overland routes. Even today this is a rather disheveled community, made up of Inuit, Cree and white settlers, that has only recently found a new role as the ‘Polar Bear Capital of the World’.

Each autumn the area’s polar bears venture onto the newly-frozen pack ice to hunt for seals, but there are good reasons to visit in the summer months too: beluga whales and birds abound. Sights to see in town include the Polar Bear Compound which houses orphan cubs and antisocial adults, the excellent Itsanitaq Museum, and Cape Merry National Historic Site.

Other places to see nearby include Prince of Wales Fort and York Factory, site of the Hudson Bay Company’s first trading post. 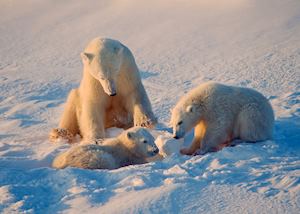 In northern Manitoba the lake-studded boreal forests of the interior plains converge with the endless tundra of the Canadian Shield. This remote wilderness spawns native wildlife that is some of the most thrilling on the continent.

The Seal River and the southern shores of Hudson Bay are the summer haunts of polar bears and thousands of beluga whales, whilst caribou and countless migratory birds flock to the flower-strewn tundra landscape.

October sees the gathering of polar bears on the shores of the Hudson Bay as they wait for the winter pack-ice to form into seal-hunting platforms. To encounter these magnificent animals, the largest of all bears, at such close quarters is truly awe-inspiring.

This sample itinerary will give you an idea of what is possible when you travel in Churchill and Northern Manitoba, and showcases routes we know work particularly well. Treat this as inspiration, because your trip will be created uniquely by one of our specialists.

Map of Churchill and Northern Manitoba

Places near Churchill and Northern Manitoba

Photos of Churchill and Northern Manitoba

Our expert guides to exploring Churchill and Northern Manitoba

We’ve selected a range of accommodation options for when you visit Churchill and Northern Manitoba. Our choices usually come recommended for their character, facilities and service or location. Our specialists always aim to suggest properties that match your preferences.