It is Churchill on the shores of Hudson Bay that, during the summer months, attracts birds and up to 57,000 beluga whales. Polar bears take up residence here in the autumn waiting for the winter sea ice to form so they can hunt for seals. 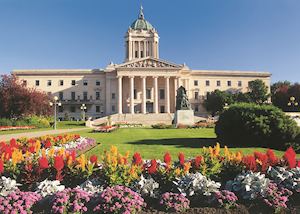 Other places of interest include Riding Mountain National Park, well-known as a black bear hotspot and the beaches of Lake Winnipeg. The provincial capital, Winnipeg, is also home to many cultural attractions and is known for its ethnic diversity.

Places to visit in Manitoba

Featuring heavily on our experiences of visiting Manitoba, these selected places are destinations that also prove consistently popular with our travelers. Our specialists can help you choose how to include them in your wider trip, based on your preferences.

This sample itinerary will give you an idea of what is possible when you travel in Manitoba, and showcases routes we know work particularly well. Treat this as inspiration, because your trip will be created uniquely by one of our specialists.

Map view Places in and around Manitoba

Places in and around Manitoba

Our expert guides to exploring Manitoba

Written by our specialists from their own experiences of visiting Manitoba, these guides will help you make the most of your time there. We share both our practical recommendations and the best ways to appreciate Manitoba at its best.

We’ve selected a range of accommodation options for when you visit Manitoba. Our choices usually come recommended for their character, facilities and service or location. Our specialists always aim to suggest properties that match your preferences.