A historic port city on China’s southeast coast, Xiamen stands out for its laid-back atmosphere, European architecture and long stretches of sandy beach. The city is spread across the mainland’s coastline and Xiamen Island, separated by a narrow stretch of water. It also includes the tiny Gulangyu Island, a former European and Japanese settlement that exudes charm through its Victorian-era buildings and pedestrian-only streets.

With year-round warm temperatures, Xiamen is a popular spot with domestic visitors, and is slowly attracting people from further afield. As well as visiting Gulangyu Island, you can take a trip to see the tulou, Fujian Province’s peculiar ring-shaped communal homes, wander the battlements of Hulishan Fort or visit a Buddhist temple.

Having visited a lot of Chinese cities, I’ve found that Xiamen has a more relaxed atmosphere, in part due to its coastal location and mild climate. It makes an interesting place to spend some time away from China’s main routes.

Things to see and do in Xiamen

The Fujian tulou homes of the Hakka minority 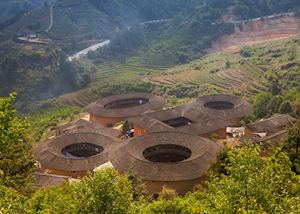 After facing persecution in the north of the country, many of China’s Hakka minority people migrated to the mountainous areas in southeastern Fujian Province in the 12th century. A two-hour drive west of Xiamen, you can visit the tulou communal homes they constructed for their new settlements.

Over 20,000 tulou are scattered across the remote hills of southern Fujian Province, 3,000 of which are classed as UNESCO World Heritage Sites. Some Hakka families still live in the buildings, and many more visit during festivals.

Clusters of the huge circular buildings were built out of compressed earth, rice, bamboo strips and wooden frames between the 12th and 20th centuries. Able to house up to 800 people, in architectural style they’re a combination of a fort and a large apartment building. The defensive walls protected inhabitants from attacks — both from people and wild animals. In the middle of each tulou is a central courtyard or shrine, and space was allocated for storing and cooking food.

Visiting the tulou clusters with a guide, you’ll learn about the Hakka culture and its people’s communal way of life as you explore the intricate layout of the buildings.

Just off Xiamen’s coast, Gulangyu Island wouldn’t look out of place in Greece with its sandy beaches, rocky outcrops and greenery. You can take a trip out to the island via a 20-minute ferry ride from Xiamen.

The island was home to European and Japanese expats in the early 20th century, and you’ll still find Victorian-era colonial architecture as you stroll its narrow, winding streets. Only small electric vehicles are permitted on Gulangyu, which adds to its peaceful, laid-back atmosphere reminiscent of times gone by.

Head up to Sunlight Rock for panoramic views over the island and Xiamen. Elsewhere on the island, you can take a stroll around Shuzhuang Garden with its bamboo forest, caves and sea-view slopes, and Piano Museum. Housed in the garden’s Tide Viewing Tower, it has exhibits on the history and culture of pianos, including a collection of over 100 models from across the world.

Perched on Xiamen Island’s south coast, Hulishan Fort has a strategic position overlooking the Taiwan Strait, or Formosa Strait. While it offers sweeping views across the port, the main draw for most visitors is the collection of over 50 iron cannons dating to the Ming and Qing Dynasties. Among them is the Krupp Cannon — the oldest and largest 19th-century breech-loading cannon in the world at 13 m (43 ft) long, with a firing range of over 1.5 km (1 mile).

The fort was constructed during the Qing Dynasty between 1894 and 1896 and was used to protect China against foreign attacks from the Japanese, both in 1900 and 1937. Your guide will relay the fort’s history and defensive role as you stroll the ramparts. You may even hear cannon shots being fired.

In a country not renowned for its coastline, Xiamen stands out for boasting several pleasant sandy beaches. While they can get very busy in the summer and during national breaks, they make a refreshing escape from the city streets.

Huangcuo Beach lies away from the main city on Xiamen Island’s southeast coast, so it’s generally quieter than the beaches of the south and west. Its lengthy stretch of golden sand is ideal for peaceful beach strolls.

Baicheng Beach, on the south coast, is backed by green parkland and offers water sports such as jet skiing and water biking. You can also rent bicycles from the beach and follow the cycle path along the shoreline. 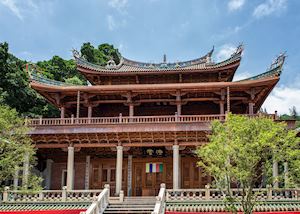 Nanputuo (or South Putuo) has been a Buddhist temple site for more than a millennia, but the building itself has been destroyed, rebuilt and extended over the years. Situated on the southeast coast of Xiamen Island, at the foot of the Wulao Peaks mountain range, the buildings that stand today were mostly constructed in 1684 and feature traditional Qing architecture.

The setting alone makes Nanputuo worth visiting. Strolling around its extensive grounds, you’ll come across terraces, pools and pagodas, with views out over the sea. The temple comprises three main halls set around an attractive courtyard: the (Devajara) Heavenly King Hall, the (Mahavira) Great Treasure Hall, and the (Dabei) Hall of Great Compassion.

The 20,000 cultural relics of Xiamen Museum

This large, modern museum in the east of the city has a collection of around 20,000 objects from around Fujian and Taiwan Provinces, as well as other areas across China. Ancient ceramics, paintings, jade ornaments, calligraphy, stone sculptures and historic weapons are displayed across several exhibitions focusing on Chinese history and culture.

As well as the permanent displays, including Exhibition on Xiamen History, Masterpieces of the Museum and The Folk Exhibition from Fujian and Taiwan Province, you can browse temporary exhibitions that are changed regularly. The museum is free to enter and offers audio guides in English, as well as professional guides who can tell you more about the objects on display.

The weather in Xiamen is pleasant all year round, but to enjoy the most comfortable temperatures at quieter times, visit between April and May or October and November. It’s best to avoid the city during the summer months and national breaks, due to the high number of domestic visitors who travel to Xiamen for its beaches and sunshine.

This sample itinerary will give you an idea of what is possible when you travel in Xiamen, and showcases routes we know work particularly well. Treat this as inspiration, because your trip will be created uniquely by one of our specialists.

We’ve selected a range of accommodation options for when you visit Xiamen. Our choices usually come recommended for their character, facilities and service or location. Our specialists always aim to suggest properties that match your preferences.