The hub of Croatian cultural and political life, Zagreb is the country’s cosmopolitan capital. The city sits at the foot of Medvednica Mountain and dates back to an ecclesiastical community established here in 1094. Its historic core, the Upper Town, is home to the principal official buildings, while below it run boulevards of 19th century neo-Baroque and Art Deco architecture.

It’s a compact city and easy to navigate. Renowned for its creative flair and café culture, the streets are lined with galleries, museums, independent shops and lively performance venues.

I love Zagreb because it’s very different to the popular (and often crowded) cities on the Dalmatian Coast. It’s quieter and more laid back, especially since you can explore on foot or by tram.

Things to see and do in Zagreb 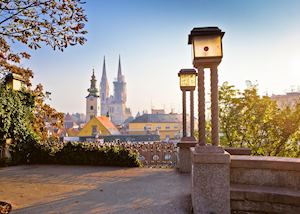 The oldest part of the city, the Upper Town, is a series of cobbled streets lit by gas lamps and lined with august historic buildings. It’s here that you’ll find the Presidential Palace, the Sabor (the Croatian parliament), and the city’s most renowned landmark, Saint-Mark’s Church.

The red roofs are interspersed with church spires, while down on the street, museums and galleries vie for attention. Pause on Jelačić Square, the city’s main meeting point — you can linger over a coffee and watch the flower sellers, then head for the nearby Dolac Market where hawkers sell locally produced honey, fruit and vegetables.

Zagreb expanded rapidly in the 19th century and the architecture of the Lower Town reflects the strong Austro-Hungarian influence with many neo-Baroque and Art Deco buildings lining the city streets. Among the shops selling edgy fashions and alternative music, the eclectic bars and the legions of cafés and restaurants, look out for the Croatian National Theatre and Mimara Museum, set in a late 19th-century building (once considered the finest in the city).

The Secessionist-style Kallina House, a residential block, is nearby, and elsewhere you’ll find the Ethnographic Museum, the Archaeological Museum and the Strossmayer Gallery of Old Masters.

Although the weathered concrete apartment blocks in Novi Zagreb (New Zagreb) are typical of the Communist-era, seeking out grittier parts of the city gives you the chance to see transformative street art and innovative new design projects in progress.

Initiatives such as the Design District Festival, which celebrates the city’s designers and creative practitioners, are breathing new life into old or run-down areas and are an indication of the city’s place as the undisputed cultural heart of the country. Look out for special events and festivals that showcase up-and-coming areas such as Martićeva. 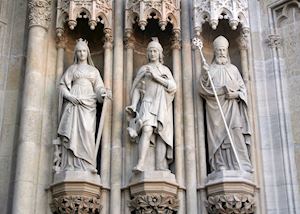 The first cathedral in Zagreb was consecrated in 1217 but it was destroyed and rebuilt on numerous occasions, most notably after an earthquake in 1880. Architect Hermann Bollé was tasked with rebuilding the city landmark and his neo-Gothic transformation is what you see today.

Flanked by two towering spires, the cathedral is enclosed on three sides by the Archbishop’s Palace. Inside, Baroque marble altars, statues and pulpits add flamboyant style, while the sacristy contains a series of 13th-century frescoes.

Another of the city’s landmarks, Saint-Mark’s Church dates from the 13th century, though it has been significantly reconstructed on various occasions. The Gothic southern portal is guarded by 15 figures sculpted in the 14th century, while inside, you’ll find work by Ivan Meštrović, the country’s most renowned 20th-century sculptor.

Its distinctive roof, which is covered in bright tiles that depict the medieval coats of arms of Croatia, Dalmatia and Slavonia on one side, and the emblem of Zagreb on the other, dates from the late 19th century and was the brainchild of Hermann Bollé, architect of the city cathedral.

Hermann Bollé’s influence is also seen at the non-denominational Mirogoj Cemetery, which is a ten-minute bus ride outside the city. The cemetery sits at the base of Medvednica Mountain and is walled by a grand arcade topped by a series of domes. Inside, tombs decorated with sculptures line the pathways. Mirogoj is the final resting place for many of Croatia’s most respected citizens, including Hermann Bollé himself.

Zagreb’s largest and oldest public park, Maksimir Park is set in an oak and hornbeam forest and was opened in 1794. With five artificial lakes, grand pathways and landscaped gardens, it makes a pleasant place to avoid the midday summer heat. The park is home to the Zagreb Zoo as well as the endangered middle spotted woodpecker.

You can visit Zagreb any time of year. It doesn’t suffer from the summer crowds like the cities along the coast and is particularly quiet in August when locals take off on vacation. With festivals and special events year round, there is always something of interest going on, and in winter, the large Christmas festival is worth experiencing.

Our itineraries will give you suggestions for what is possible when you travel in Zagreb, and they showcase routes we know work particularly well. Treat them as inspiration, because your trip will be created uniquely by one of our specialists.

We’ve selected a range of accommodation options for when you visit Zagreb. Our choices usually come recommended for their character, facilities and service or location. Our specialists always aim to suggest properties that match your preferences.

Our specialists seek out authentic ways to get to know the places that could feature in your trip. These activities reflect some of the experiences they've most enjoyed while visiting Zagreb, and which use the best local guides.