Steeped in history and mythology, Paphos dates to Neolithic times. Located on Cyprus’s southwest coast, the whole city is a UNESCO World Heritage Site thanks to its many ruins and the antiquities unearthed in this area over the years, from Roman mosaics to underground tombs.

The city comprises two towns that were united in the 1970s. While Nea Paphos (new Paphos) is where you’ll find a modern marina, hotels, shops, cafés and restaurants, there’s also a Medieval castle and Paphos Archaeological Park, which you can tour with a private guide. Meanwhile, in less-developed Ktima, traditional stone buildings line narrow streets and Neoclassical government buildings stand proudly in the main square.

You can balance beach relaxation in nearby Coral Bay with a deep dive into the area’s past. See the Tombs of the Kings, an underground necropolis, and visit a 12th-century temple dedicated to the Greek goddess of love, Aphrodite, at the site where it’s believed she landed from the sea.

Things to see and do in Paphos

This UNESCO World Heritage Site dates back to the 4th century BC, when the ancient city of Paphos was founded. Ceded to the Romans in 58 BC, most remains originate from the Roman period, ranging from once-luxurious villas to temples and tombs.

A highlight is the collection of exquisite mosaic floors, which are spread across three wealthy residences. Despite being discovered by a farmer ploughing his field, they are extremely well preserved, each telling a Greek myth or legend. The Tomb of the Kings also forms part of the park — although these burial chambers and excavated tombs were the final resting place for local dignitaries and public figures, rather than royalty.

Dominating the shore and marking the end of the town’s marina is the medieval Paphos Castle. This squat, stone structure began life as a Byzantine fort and has been conquered by the Venetians, converted into a prison, used for salt storage by the British and now enjoys a slower pace of life as a museum. After your visit, you’ll find the marina lined with restaurants serving freshly caught seafood.

Known as Ktima, Paphos old town is where traditional stone buildings and narrow alleyways stand alongside grand Neoclassical government buildings. The imposing Town Hall stands proudly in the main square and was designed in 1955 to reflect the architecture of the Parthenon in Greece. Between stately wooden-shutter homes are tavernas specialising in classic Cypriot cuisine, indoor markets and a number of museums.

A 20-minute drive north from central Paphos is Coral Bay, a long sweep of golden sand sheltered by rocky bluffs at each end. The gentle gradient of the sand and calm waters make this a popular family beach, and around the bay you’ll find a range of restaurants, traditional tavernas and cafés serving Cyprus coffee — made very strong and often served with a glass of water.

Paphos enjoys a mild climate for most of the year, though temperatures soar to roughly 30°C (86°F) during the peak of summer, which can be uncomfortable if you’re spending lots of time outside. For the best weather without the summer crowds of July and August, we recommend visiting between April and June or September and October. 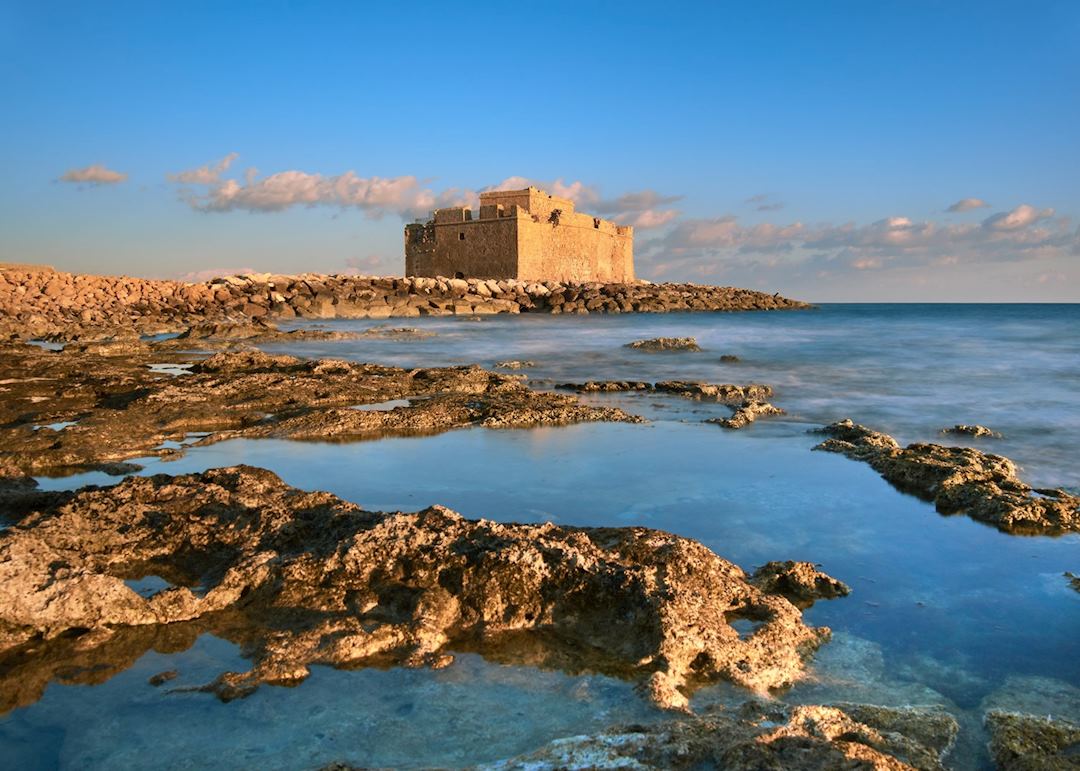 Start planning your trip to Paphos

We’ve selected a range of accommodation options for when you visit Paphos. Our choices usually come recommended for their character, facilities and service or location. Our specialists always aim to suggest properties that match your preferences.

Our specialists seek out authentic ways to get to know the places that could feature in your trip. These activities reflect some of the experiences they've most enjoyed while visiting Paphos, and which use the best local guides.