The forest-covered Troodos Mountains ripple through central Cyprus, dominated by the often snow-dusted Mount Olympus, the country’s highest peak. The rugged seclusion of the villages that cling to the valley walls have long protected the exquisitely painted churches and monasteries from invading forces — ten of which are now UNESCO World Heritage Sites.

The pine-scented forests and plains are home to more than half of Cyprus’ endemic species, including the Cypriot mouflon, a curved-horn sheep that has become so symbolic of Cypriot culture that you’ll find it on the country’s euro coins. In summer there are hiking trails and panoramic picnic spots to enjoy, while in winter, ski trails open on the flanks of Mount Olympus.

The region is dotted with cobbled-street villages built on terraced slopes, with stone walls, terracotta-tiled roofs, and wooden verandas. Traditional Cypriot ways of life continue, with many villages specialising in a particular skill or delicacy, including halloumi, wine and lace.

Things to see and do in the Troodos Mountains

Made a national park in 1992, this swathe of forest surrounding Mount Olympus protects a large part of the mountain range, which in turn shelters a range of endangered species, including eight endemic species of butterfly, griffon vultures and the Bonelli’s eagle.

The best way to get to know the area is on a guided hike along one of the trails, many of which take you through a variety of rich habitats, from high-altitude juniper woodlands to thick alpine forests that run alongside rivers, streams and waterfalls.

Visit the artisans of the Troodos Mountains

Cypriot crafts and cuisine have been made using the same traditional methods for centuries, with skills and recipes passed from generation to generation. You can get hands-on learning to make halloumi, the country’s national cheese, learn the art of beekeeping with a local honey producer or pick fruit in a seasonal orchard.

The lace makers of Lefkara were so revered that Leonardo da Vinci purchased an alter cloth for Milan Cathedral in the village. The same pattern is still used today, and on a guided tour of the region’s artisans, you can learn more about the history of Lefkara lace, and see how the distinctive geometric-pattern embroidery is created. There’s also the opportunity to try your hand at basket weaving, another Cypriot speciality, or to watch the village’s silversmiths at work — known for their fine filigree.

From the outside, the rural churches and monasteries that punctuate the mountain landscape look relatively unassuming, with wooden roofs and rough stone walls. However, this group of monuments from the former Byzantine Empire is one of the largest and best-preserved in Europe, with highly refined paintings adorning their interior.

At the monastery of Saint John Lampadistis, you’ll find a stone-walled complex of buildings, the oldest dating back to the 11th century. Now a UNESCO World Heritage Site, the chapel, churches and monastery buildings are decorated with richly detailed frescoes that not only reveal the history of the complex, but show the development of Byzantine art from the 11th to the 19th century. 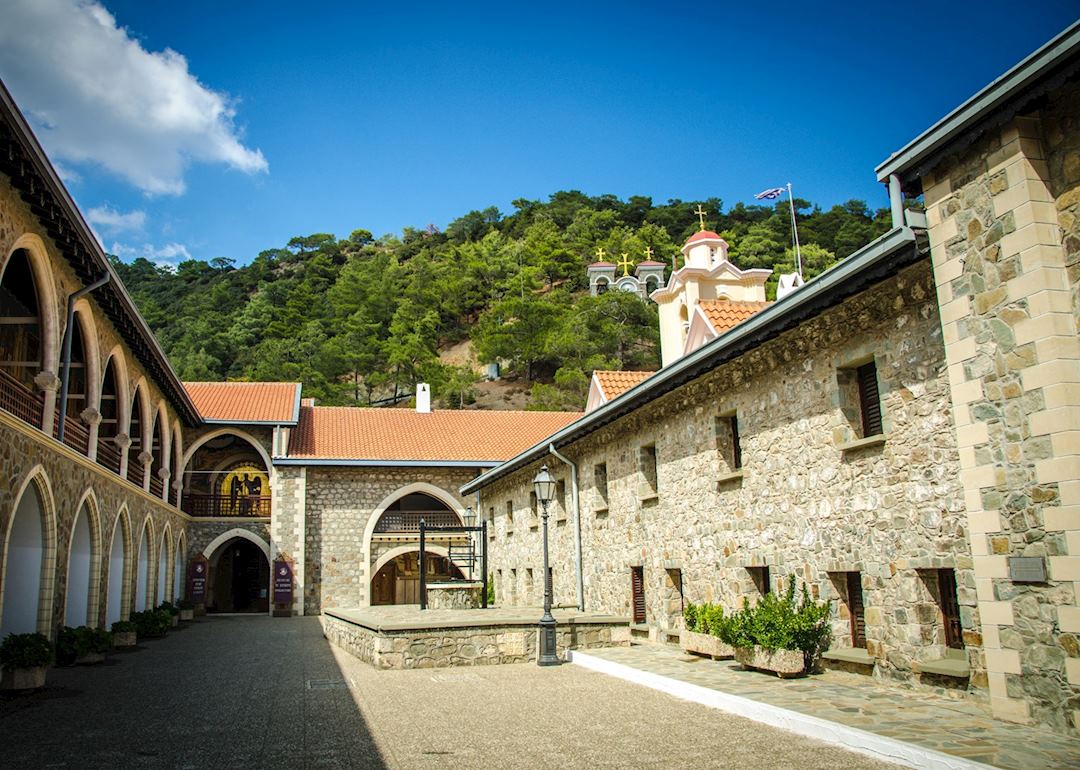 We’ve selected a range of accommodation options for when you visit Troodos Mountains. Our choices usually come recommended for their character, facilities and service or location. Our specialists always aim to suggest properties that match your preferences.

Our specialists seek out authentic ways to get to know the places that could feature in your trip. These activities reflect some of the experiences they've most enjoyed while visiting Troodos Mountains, and which use the best local guides.