Once a wealthy banker’s mansion, then a prestigious college, the Cour des Loges is today a five-star hotel set in a series of buildings dating from the 14th to the 17th centuries. This upscale retreat is centrally located in Vieux Lyon with the city’s primary attractions including various silk ateliers (workshops) and Michelin-starred restaurants within steps of the hotel.

The 60 rooms and suites are tucked away between a series of courtyards, stairways, patios and balconies and all have their own character and decor. The overwhelming theme throughout the hotel is Italian Renaissance with lavish indulgences matched by all modern comforts.

There are two restaurants on the premises. The fine dining ‘Les Loges’, which has one Michelin star and is set in an internal courtyard, and the more casual bistro Le Café-Épicerie, which has outdoor seating in warm weather.

Somehow, the hotel has also managed to fit in a series of hanging gardens, an indoor pool and spa, as well as a cooking school and a rooftop garden.

We love Cour des Loges’ central location in the heart of Lyon’s old town. Its unbeatable convenience coupled with the elegant dining and deluxe amenities makes this one of Lyon’s top hotels.

The 60 rooms and suites all have their own special charm and character. Original features such as fireplaces and ceiling beams are preserved and complemented by antique furniture, rich fabrics and large, gilded frames. Although all rooms are different, the decor throughout is romantic with the primary influence the Italian Renaissance. Expect rich yellows and reds, large paintings or photographs, and quirky bathrooms with modern fixtures and amenities. All rooms also have a TV and Wi-Fi.

Centrally located in the heart of Lyon’s old town with the city’s primary attractions and restaurants within a 15-minute walk, Cour des Loges is a convenient property for those looking to discover the historic side of the city while also exploring other districts.

Food is a highlight at Cour des Loges starting with a gastronomic breakfast featuring homemade classics including madeleines, praline brioche and daily egg dishes among other delicacies. Later in the day you can choose to eat in the chic hotel bistro, Le Café-Épicerie, where you’ll find seasonal local dishes, or in Les Loges, the hotel’s fine-dining restaurant which holds one Michelin-star.

The hotel does not have any wheelchair accessible rooms.

Our itineraries are there to spark ideas for how you could include a stay at Cour des Loges as part of your trip. Treat them simply as suggestions, because every aspect of the trip we create for you will be yours to define.

Lyon and nearby places 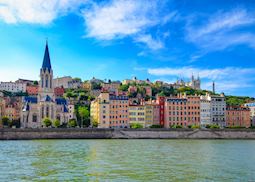