This is a simple yet comfortable guesthouse, well-located in the center of Delhi. Its suburban location means you're within easy striking distance to all Delhi has to offer, and the hotel offers good value for money. All 16 rooms are unique in design and offer a comfortable stay. There's a large lounge with a good newspaper and book selection, plus a roof terrace for those looking to relax at the end of the day.

They have a selection of local hand-made handicrafts available and offer a delicious complimentary afternoon tea, serving an array of Indian teas, coffee and their homemade banana bread. We've found that the family and their helpers will make you feel very welcome during your stay.

Dinner can be arranged upon request, however please give the staff as much notice as possible. 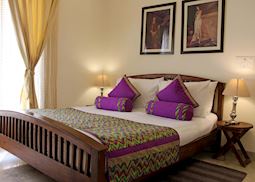 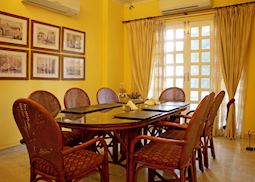 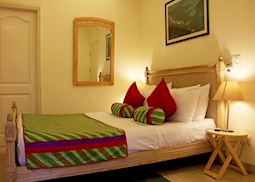 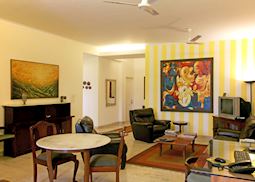 Each of the 16 rooms at Colonel’s Retreat are individually designed and have a decidedly home-like feel to them. Twins and doubles are available to suit specific parties, and extra beds can also be arranged for rooms if necessary. An open lounge is situated on each of the four floors, while the rooms all come with air-conditioning, a TV, a fridge and Wi-Fi.

Despite being based in a calm, upmarket suburb, a metro station lies a short walk away from Colonel’s Retreat, allowing for easy access to all of Delhi’s sprawling metropolis. Landmark sites such as India Gate and Connaught Place are also just a short drive away, making this an excellently located guesthouse.

Along with home-cooked lunches and dinners served in communal dining areas, Colonel’s Retreat prides itself on its signature afternoon teas, which include a selection of Indian teas, coffee and their delicious banana bread. The breakfasts consist of fresh artisan bread from an exclusive bakery, and breakfasts also include homemade marmalades and jams.

A superb location and warm service combine to make this one of our preferred guesthouse stays in Delhi.