Imperial architecture rubs up against Mughal ruins in New Delhi. The city's heritage is best appreciated in this district, and the Rajpath (Hindi for "King's path") is the ceremonial route, surrounded by well-kept lawns, that cuts through its heart. Stroll along the path past sellers of everything from postcards to dried chilies, until you reach India Gate. A memorial to soldiers who lost their lives during World War I, visit in the evening to see it gently illuminated. 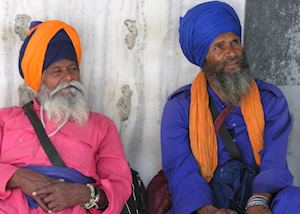 With settlements dating back to 700 AD, Delhi's Old Town was actually built north of the original community. Built as a walled city by Shah Jahan in 1639, it became the capital of the Mughal Empire. With narrow, twisting streets, Delhi's old town is best explored on foot. Starting off in the markets, you can explore the bazaar and ordinary items being sold here, from the vibrant wedding sector full of garlands and fabrics to an area completely devoted to cutlery.

A peaceful escape from the hubbub of Delhi's streets, everyone from business-brokering elites to gossiping teenagers frequents the Lodhi Gardens in the early evening. Orderly arrangements of palm-lined paths lead past rare plants, which have been helpfully labeled for visitors.

The Sufi teacher Pir Vilayat Inayat Khan was moved to set up the Hope Project by the poverty of the families living in the Nizamuddin Basti suburb of central Delhi. Started in 1908, the charity aims to help vulnerable inhabitants unlock their potential and, to do this, it trains them to run a number of programs, including a school, health center and women's enterprise unit.

Guided by a member of the community, you can step into the backstreets of Delhi to see the project's work. Squeezing past local markets and tea stalls, you'll see residential Delhi from the inconspicuous local mosques and tiny meeting halls. Everyone is keen to show you their role in the project, from young nurses being trained in the health center to women gaining independence by learning local crafts.

Delhi offers some of the finest restaurants in Asia, but local people still prefer to patronize Delhi's dazzling variety of street food. In the evening, the city's sprawling markets of Chandni Chowk and Chawri Bazaar fill with the smell of frying pastries and grilled meats. Battered metal hatches open up to reveal skilled preparations that have been passed through generations, rolling the perfect roti or folding the neatest samosa.

On a guided tour you're talked through the huge variety of food on offer, sampling your way through specialities such as stuffed paranthas (Indian flatbread), aloo chaat (fried potatoes) and butter chicken. Finish with phiri, a creamy milk-and-rice-based dessert served in a clay pot, or a fruit flavored kulfi, Indian ice cream.

You'll learn subtleties such as the 18 different types of chili grown in India and how different ghees (clarified butter used for cooking instead of oil) affects the finished dishes. You'll then help the chefs prepare a traditional meal before enjoying it in the hotel's rooftop restaurant with the streets of Delhi ever noisy below.

Delhi is best visited in October to March when the monsoon rains have finished and temperatures average a comfortable 30°C (86°F). December and January can be surprisingly cool though — but a little quieter — with evening temperatures dropping to 10°C (50°F). By April they climb up to 40°C (104°F) and, coupled with high humidity, this makes exploring uncomfortable.

Our expert guides to exploring Delhi

Written by our specialists from their own experiences of visiting Delhi, these guides will help you make the most of your time there. We share both our practical recommendations and the best ways to appreciate Delhi at its best.