Most famous as the home of the Taj Mahal, Agra is set on a bend in the sacred Yamuna River and has held a strategic defensive position throughout its history. Both the Taj and the highly impressive city fort overlook the river, as do a number of significant tombs and mausoleums from the Mughal period. The Taj is the undoubted highlight, a magnificent structure that easily lives up to its exalted reputation. Modern Agra by comparison lacks the charm of the other great cities of India's north, however its exquisite monuments make it an unmissable stop on any first time tour of the country.

Whilst the Taj Mahal is an obvious must-see in the chaotic city of Agra, the Tomb of Itimad-ud-Daulah, known as the ‘Baby Taj’ is a fascinating addition. It’s said to be the mini draft of the Taj itself.

Things to see and do in Agra 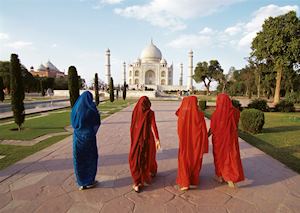 One of the world's most famous buildings, the Taj Mahal, which means Crown Palace, is every bit as impressive in real life as it is in carefully-posed pictures. As you enter through an elaborate arched gateway you will see the monument for the first time, the wonderfully symmetrical landscaped gardens leading your eye to the intricately carved marble domes and towers. An extravagant memorial to Emperor Shah Jahan’s beloved third wife, it took thousands of artisans over 20 years to construct and its timeless beauty is a testament to their skill and vision. Sunrise and sunset are the best times to visit, when there are fewer visitors and the soft light bathes the building in a romantic glow.

A magnificent 16th century fortress with 20 meter high walls, the Red Fort is a vast sandstone complex which was converted into a lavish palace by Shah Jahan. It remains one of the finest Mughal forts in India and a collection of impressive buildings can be seen inside. There are several mosques, including the exquisite Nagina Masjid, originally used by the ladies of the court. You will also pass through several public halls used for audiences with the public or visiting dignitaries, the elaborate Mirror Palace, and a white marble tower where Shah Jahan was imprisoned for eight years by his son.

The Itimad-ud-Daulah is a lavish 17th century tomb which houses the mausoleum of Mirza Ghiyas Beg and his family. Sometimes called the 'Baby Taj' by local guides, it is located in a very tranquil area and was the first building in the city to be clad entirely in marble. Although far smaller than the Taj Mahal, it is exquisite in its detail with extremely delicate carvings and elaborate architectural flourishes. Four corner minarets surround a rooftop pavilion, intricate inlay work completely covers the structure, and a superbly carved latticework wall screens the tombs from initial view.

Overlooking the Taj Mahal from the opposite bank of the Yamuna River, Kachhpura village is near a number of ancient Mughal monuments including the Gyarah Sidi and Humayun's Mosque. Walking tours here are run as part of a community development program with local people trained as tour guides. Leading you around their own village, they offer authentic insights into life in this rural setting and will guide you around the main sights as well as introducing you to several members of the village. The walk ends at Mehtab Bagh, from where there are majestic views across the river to the Taj Mahal.

Our itineraries will give you suggestions for what is possible when you travel in Agra, and they showcase routes we know work particularly well. Treat them as inspiration, because your trip will be created uniquely by one of our specialists.

We’ve selected a range of accommodation options for when you visit Agra. Our choices usually come recommended for their character, facilities and service or location. Our specialists always aim to suggest properties that match your preferences.

Our specialists seek out authentic ways to get to know the places that could feature in your trip. These activities reflect some of the experiences they've most enjoyed while visiting Agra, and which use the best local guides.