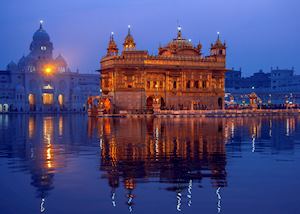 The Guru Granth Sahib (the Sikh scripture) is displayed within the shrine, surrounded by floral offerings and so much gilding that the room seems to glow. You’ll hear rhythmic chanting as worshippers walk around the chamber in a clockwise direction (non-Sikhs are welcome too). Each evening, the holy book is paraded in front of jostling crowds before being put to bed in an elaborate ceremony.

The temple is part of a larger complex that includes a research institute, library and museum commemorating those killed during Operation Blue Star in 1984. You’ll see pilgrims bathing in the water, which is believed to have healing properties. And, there’s a huge kitchen run by volunteers (anyone is welcome to help roll chapattis, serve food or wash up), who encourage all visitors, regardless of race or religion, to sit down and eat together in the dining hall. 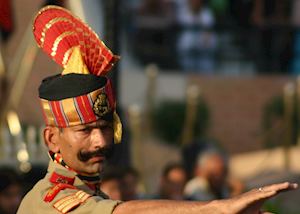 After the partition between India and Pakistan in 1947, Amritsar sat just 28 km (17 miles) from the border. The town of Wagah became a border post, and over the following years the daily closure of the border has turned into an elaborate ceremony. Tiered seating on each side gives you a vantage from where you can cheer on the guards of both nationalities as they perform a series of manoeuvres that look more like dance performances than army drills.

Amritsar is at its best from October to March, when the weather stays relatively warm, although temperatures can dip from mid-December to January. From April onward, temperatures begin to rise and can hit 40 C (104 F), and the monsoon rains tend to arrive around July. If you’re happy with a little humidity, the temperatures have begun to cool by September at a time that represents good value for travel.

This sample itinerary will give you an idea of what is possible when you travel in Amritsar, and showcases routes we know work particularly well. Treat this as inspiration, because your trip will be created uniquely by one of our specialists.