The Nubra Valley lies to the north of Leh and can be most easily accessed via the world's highest mountain pass. Locked between the Ladakh range and the higher Karakoram range - Nubra Valley offers some of the most spectacular scenery in the region. 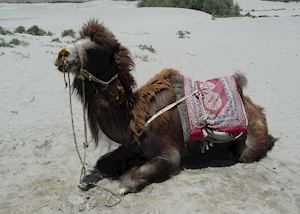 The valley contains the confluence of the Nubra and Shyok rivers, allowing crops to grow in the watered soil. Being slightly lower than Leh, and having a vast amount of sunshine in the summer season allows two harvests to be had per year. This produces some lush green landscapes surrounding by the far more forbidding cold desert landscapes that characterize much of Ladakh.

Where the land is not watered, the desert can be very harsh, but this does allow sand dunes to form which can easily be explored by the hardy Bactrian double humped camel! Surrounding all this are numerous snow capped peaks. These peaks really add to the scenery, especially around sunset where the last of the suns rays cause a golden glow to reflect down the valley below.

The valley, although isolated, is dotted with villages and there is also a monastery to explore as well as numerous pretty village walks.

We’ve selected a range of accommodation options for when you visit Nubra Valley. Our choices usually come recommended for their character, facilities and service or location. Our specialists always aim to suggest properties that match your preferences.