Gleaming white sands, bright coral reefs, and a distinctive indigenous culture, all in the Okinawa Archipelago. 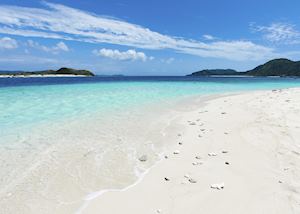 Named after the largest island in the archipelago, these islands offer a singular combination of subtropical beaches, sun-warmed waters, and a distinctive culture that’s unlike the rest of Japan. You might include a stop here as a relaxing beach break at the end of a busy trip. However, there’s enough to do and see that you could easily spend a week exploring at a laid-back pace.

Things to see and do in the Okinawa Islands

So small that you can drive around them in just a few hours, these two tiny islands have a slow, laid-back pace that’s typical of the archipelago. We suggest renting a car to spend a leisurely day exploring the coast, where you can admire lighthouses overlooking the Pacific, sample the local cuisine, and stroll along the coastal trails. You can also head into the islands’ interiors, which are dense with rainforests and wild rivers.

Ishigaki and Miyako also make good bases for exploring even smaller islands. You might visit the national park at nearby Iriomote, for example. The park is home to the Iriomote cat, an endemic (and elusive) subspecies of leopard cat.

The archipelago’s sugar-sand beaches, turquoise waters, and lively underwater ecosystem draw visitors from across Japan and around the world. We’ll suggest the best beaches for your tastes, whether you prefer something lively or laid-back.

The capital city of Okinawa, Naha is the heart of the indigenous Ryūkyū culture that still thrives here, albeit merged with certain aspects of traditional Japanese culture. You can delve more deeply into the islands’ history by examining the objects on display at the Naha City Traditional Arts & Crafts Center. Here, you’ll see masterworks by weavers, potters, and glassblowers, and can even try making your own.

The food here is also distinct from the dishes you’ll find on more northerly islands. For example, the local tipple, awamori, is made from rice, like sake, but is distilled rather than brewed and usually aged in clay pots to tame its fiery aftertaste.

We recommend visiting between March and early May or late September to December, when the weather is warm and sunny and typhoons are unlikely.

Places to visit in Okinawa

Featuring heavily on our experiences of visiting Okinawa, these selected places are destinations that also prove consistently popular with our travelers. Our specialists can help you choose how to include them in your wider trip, based on your preferences.

This sample itinerary will give you an idea of what is possible when you travel in Okinawa, and showcases routes we know work particularly well. Treat this as inspiration, because your trip will be created uniquely by one of our specialists.

Map view Places in and around Okinawa

Places in and around Okinawa

Our expert guides to exploring Okinawa

Written by our specialists from their own experiences of visiting Okinawa, these guides will help you make the most of your time there. We share both our practical recommendations and the best ways to appreciate Okinawa at its best.

We’ve selected a range of accommodation options for when you visit Okinawa. Our choices usually come recommended for their character, facilities and service or location. Our specialists always aim to suggest properties that match your preferences.