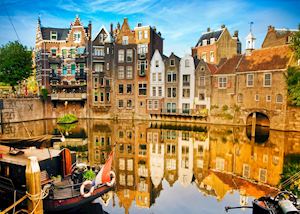 One of the Netherlands’ most modern cities, Rotterdam bucks the trend of other Dutch cities. Instead of calm, narrow canals and row houses, Rotterdam showcases wide rivers and busy working ports. Extensive bombing during World War II destroyed much of the city, but its rebuilding has been focused on creating a new, modern skyline and allowing contemporary architecture to flourish.

At the same time, places like the City Hall, Laurencekerk and the Delfshaven district have been carefully preserved. The latter is where the Pilgrims lived and worshiped before sailing to America.

You can explore the varying highlights of Rotterdam on a combined walking and boat tour of the city, where you’ll see the old and the new in the Old Harbour, the theater square and concert hall and the city’s many modern sculptures. You can also check out plenty of museums, including the Maritime Museum and its adjacent port lined with historic ships. 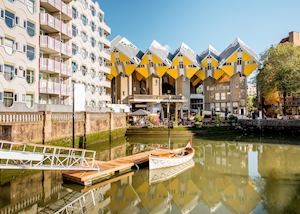 Part of Rotterdam’s rich modern architecture movement, the looming, gray-stone arch of the Markthal encompasses a mixed-use mini community of housing, offices, markets and restaurants. Beneath the horseshoe-shaped arch, which is enclosed on both sides by massive walls of windows, you can browse an open-air market during the day and dine in one of the restaurants at night. The inner walls of the arch are richly decorated with a massive mural referencing the still life paintings of the Dutch Masters, creating a feeling of warmth and playfulness inside. On the outer walls, you can see the many balconies of the apartments lining the upper floors.

Opened in 1992, this modern and contemporary art museum is renowned both for its ever-changing exhibitions and its radical architectural style. Showcasing work from Chuck Close, Andy Warhol, Picasso and more, the museum includes modern masters alongside contemporary paintings, sculptures, photography and fashion. You can view the current showings in the unassuming box-shaped building, whose seven exhibition halls are seamlessly linked by a sloping, spiraling floor. 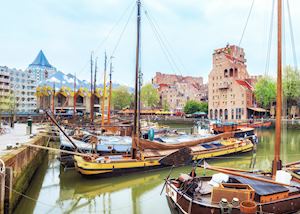 Many museums are closed on Mondays but are otherwise open year round. High water levels and winds mean boat activities are sometimes canceled last minute.

This sample itinerary will give you an idea of what is possible when you travel in Rotterdam, and showcases routes we know work particularly well. Treat this as inspiration, because your trip will be created uniquely by one of our specialists.