Enjoy a walk along Portugal’s south coast, starting from the historic city of Lagos before driving out to the remote village of Sagres and the wild and rugged Cape Saint Vincent for a view over the Atlantic. A private guide and driver will accompany you on this full-day guided hike to ensure you get the most out of your time and gain an insider’s understanding of the region and its history. You’ll learn how Lagos was once one of Portugal’s most important hubs, hear about its architecture and geology, and see city and coastal views that rival those found anywhere else in the country.

Departing from you hotel with your driver and guide you’ll head along the coast to Lagos, the historical capital of the Algarve. The city is set in a strategic location and was first settled by the Romans, who were quickly followed by the Visigoths and Moors, and finally the Portuguese. Your guide will elaborate on this part of the city’s history as you begin your walk, explaining how Lagos grew into one of the most important cities in Portugal, as the country took its place at the heart of a vast empire.

Your guide will also point out evidence of the devastating 1755 earthquake, which rocked the city, as you wander the narrow streets in the heart of the old town, passing whitewashed houses and the medieval castle and fishing port.

You then head out along the coast, walking on paths along the tops of the dramatic sandstone cliffs that circle a string of sandy beaches. If you wish, there’s time to stop and swim here.

Continuing the walk, you arrive at the cliffs of the Ponta da Piedade, where sheer drops lead to turquoise seas, rock arches and sea stacks. From here, you’ll get views of the Bay of Lagos set against a backdrop of the hills of Monchique. On a clear day, you can see past the city of Albufeira to the west and to Sagres to the east.

Your driver will meet you here to take you to a nearby restaurant for lunch (not included).

In the afternoon, you’ll enjoy a scenic drive to the remote village of Sagres at Portugal’s southwestern tip. Sitting under the gaze of a 15th-century fortress, this laid-back village has an edge-of-the-world feel. Nearby is the arresting Cape Saint Vincent, where Prince Henry the Navigator founded the first nautical school in the world. Sheer cliffs give way to the turbulent waters of the Atlantic, making a dramatic endpoint to your day.

Once you’ve had some time to rest and admire the views, your guide will take you back to your hotel.

Other experiences in Algarve 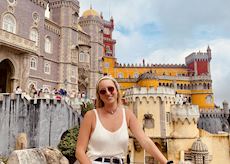