Walk through streets lined with royal palaces, temples, tombs, pagodas and shrines in Gyeongju, the former capital of the Silla Dynasty (57 BC to 935 AD). Though this region of southeast Korea has been inhabited since prehistoric times, it’s best known as the home of the imperial capital for almost 1,000 years. 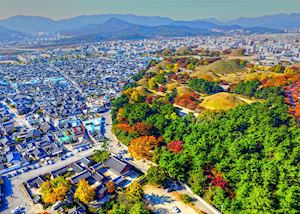 Twenty-three members of the Silla royal family are buried at the Tumuli Park, a walled series of grassy hillocks now surrounded by formal landscaping and walking paths. Known as tumuli, the mounds of rock and earth sit above a series of wood-lined burial chambers.

The only one of the tombs open to the public is the vast Cheonmachong, the ‘Heavenly Horse Tomb’, named after a birch-bark painting found here that depicts a Korean flying horse. The tomb is thought to have been built in the 5th or 6th century for an unknown Silla king. During excavation, the tomb was found to contain nearly 10,000 burial offerings including pottery, bracelets and crowns, most of which are now on display in the Gyeongju National Museum.

North of the city, the Yangdong Folk Village showcases traditional architecture against a backdrop of the four spines of Mount Seolchangsan. People still live in the village’s 160 houses, which represent the style of the Joseon Dynasty (1392 to 1910), with stone-walled lanes winding between thatched roofs to fields full of vegetables. This is Korea’s largest traditional village and offers a good impression of traditional living in rural Korea over the past 200 years.