Looking over the sea from the sandy Málaga waterfront, the Gran Hotel Miramar opened in 1926. At various points, it has served as a hotel, hospital, and Palace of Justice before reopening in 2016 as a luxury hotel. The property pays homage to its original design with a grand marble lobby hung with glittering chandeliers and an elaborate neo-Moorish internal courtyard.

Decorated in Arab, Mediterranean or Modernist style, the 190 rooms are all elegantly furnished to a high standard. Rooms to the front of the property offer sea views.

In front of the hotel, pleasant gardens lead down to the beach and are the setting for the large semi-heated outdoor pool, surrounded by loungers and tinkling fountains. Inside, an expansive spa boasts treatment rooms, a hammam and a Jacuzzi.

A buffet breakfast is served overlooking the gardens, with the tables set outside in the warmer months. The hotel also has a fine-dining restaurant and terrace, as well as a rooftop bar with a resident DJ at weekends. 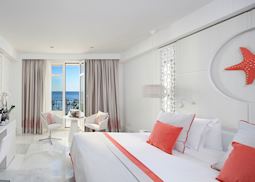 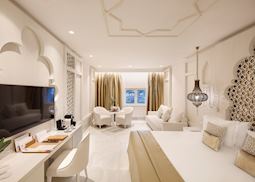 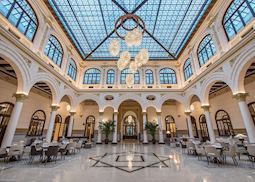 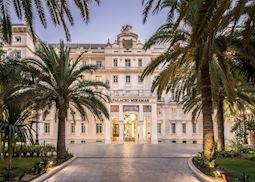 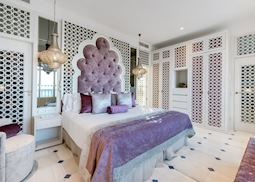 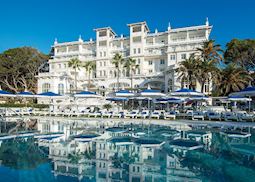 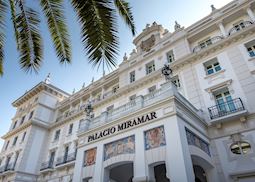 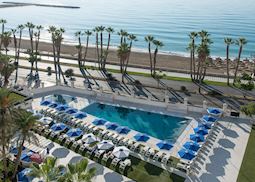 Rooms either overlook Málaga Bay or the city itself and follow an Arab, Mediterranean or Modernist design theme, from Moorish-inspired velvet headboards in some rooms to fresh Mediterranean whites and blues in others. Every room has a bath and shower, and tea- and coffee-making facilities, as well as air conditioning and complimentary Wi-Fi.

The hotel sits directly in front of one of Málaga’s beaches, within easy walking distance from the heart of the city. Within 15 minutes, you can walk to the Alcazaba (fortified palace), Picasso Museum or central cathedral. Málaga is about an hour and a half away by car from other Andalusian cities, such as Granada and Ronda.

The hotel serves a buffet breakfast in a marble-clad room with panoramic windows that look over the pool and nearby promenade and beach. In warmer months, the breakfast room extends into the garden. The hotel has two restaurants, Brasserie Príncipe de Asturias and Restaurante Mediterráneo, both serving traditional Spanish fare. There’s also a rooftop terrace with a bar area overlooking the sea, and a snack bar.

The enormous spa complex features treatment rooms where you can take advantage of a vast menu of pampering and therapeutic massages, as well as other facial and beauty treatments. You also have use of a hammam and Jacuzzi, and an outdoor pool that’s heated in cooler months to remain open year-round.

An elegant option in the heart of Málaga, we love the refined charisma of the Gran Hotel Miramar. If you want to be on the beach but close to the convenience of a city, this is an ideal choice on the Costa del Sol.