Jordan and Egypt: Petra to Giza and Luxor

A trip to the Middle East can feel like a visit to an ancient past, especially when you see the region’s enduring stone monuments. The sun rises and sets over the pyramids as it has for four millennia and it still lights the face of Petra’s Treasury in glowing gold, just as it did during the height of the Nabatean empire. In fact, the enormous edifices are usually the highlight of any trip to the area.

If you’re only going to visit the Middle East once in your life, I suggest combining Jordan and Egypt to see the best-known sights of both.

What to see and do in Jordan

A grand tour of Jordan could easily take more than two weeks, but if you’re just hitting the highlights, I suggest about six days, beginning and ending in the capital city of Amman.

Martian landscapes in the Wadi Rum 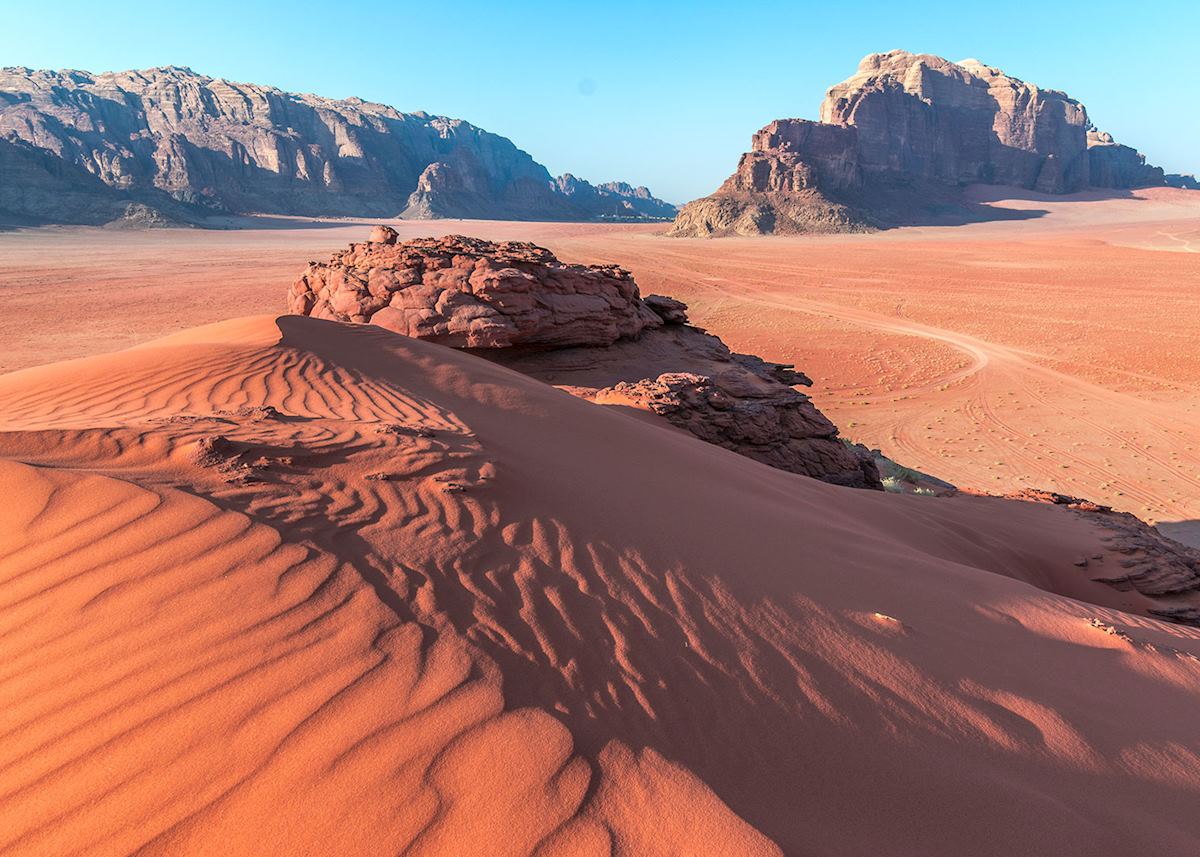 Located a five-hour drive south of Amman, Wadi Rum looks like another world. Eroded into strange shapes by wind-blasted sand, rocky cliffs rise out of the brick-red desert. In fact, this was the filming site for several movies set on Mars, including Matt Damon’s The Martian.

The barren landscape can seem bewildering to navigate, filled with moving sands and shifting light as the sun moves overhead, changing from rich rose in the morning to dark crimson in the evenings.

Despite this, my guide drove with perfect confidence through the desert canyons, steering his pick-up by some strangely accurate internal map. A tall, lean man with short white hair and a sun-weathered face, he paused occasionally to let me scramble over boulders or to point out important sites, like a Nabatean temple or the fluted rock known as the Seven Pillars of Wisdom.

You can also pause at Bedouin encampments to share cups of sweet mint tea with some of these nomadic people who make their home here.

The lost desert city of Petra

The moment you first see Petra is purely cinematic. You enter the lost city through a tall, narrow crack in the stone massif known as the Siq, walking for 20 minutes past the fragments of the aqueduct system that made this city possible. I recommend you visit in the morning, when the crowds are thinner. 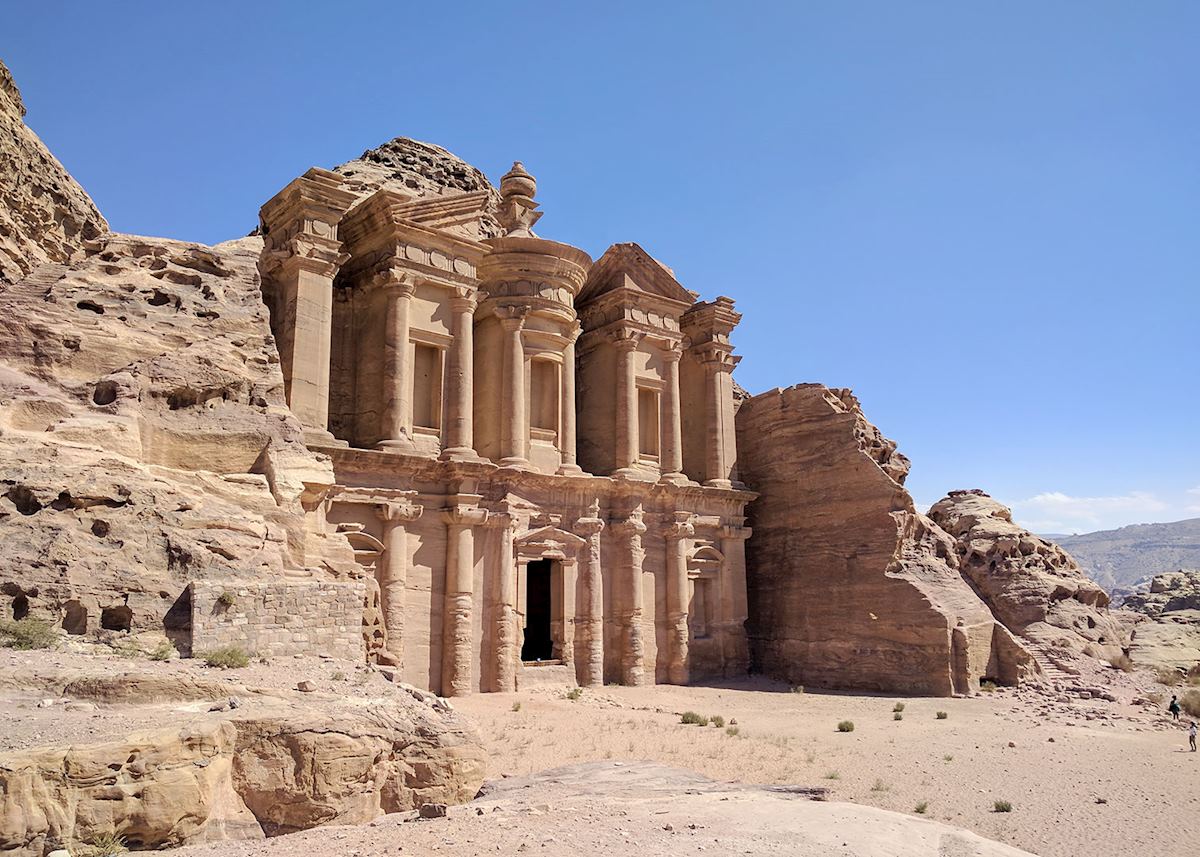 Then you step out of the Siq and the Treasury reveals itself. Like most people, I’ve seen it in photos and Indiana Jones and the Last Crusade, but nothing prepared me for just how enormous it is, soaring almost as high as the Arc de Triomphe. After the shock of the size, you start to pick out the well-preserved details — the curled cornices on the columns and the dancing Amazons with axes on the upper level.

I would plan to spend at least two days in Petra, beginning with a guide on the morning of your first day, and then exploring on your own.

For me, the Monastery is the highlight of the city. Known in Arabic as Ad Deir, it’s located at the top of more than 900 slightly daunting steps. You’ll likely reach their base in the middle of the afternoon, when you’re beginning to flag and may wonder if the climb is worth the effort.

It is. Taller and much wider than the Treasury, the Monastery glows in the late afternoon light like a window into another time.

For your second day, I suggest approaching the city from the back way. It’s a short 4x4 ride to a canyon near ‘Little Petra’ and from there, you can take a rugged two-hour hike to the Monastery. Descend the many steps into the city to explore, going against the general flow, and end at the Siq, near your hotel. Though the Monastery will be less photogenic in the morning light, it’s also less busy.

What to see and do in Egypt

Because it’s 11 times larger than Jordan, and packed with even more to see, I recommend allotting the lion’s share of your trip to Egypt — ten days should be enough to take in the main sights. The flight from Amman to Cairo is just over an hour.

Pyramids and the Museum of Egyptian Antiquities in Cairo

A tourist attraction since the Greeks came to gawp in amazement 4,000 years ago, the pyramids at Giza are the last Seven Wonders of the Ancient World still standing. Even today, in an age of mountain-high skyscrapers and space travel, I found them jaw-droppingly impressive.

I saw the pyramids for the first time on a guided tour from Cairo, led by Majid. A slim man who preferred flowery shirts and had a deep knowledge of his country’s history, he structured my tour around the evolution of the pyramid.

We began with the Step Pyramid in Saqqara, an hour outside Cairo. It was built in the 27th century BC by Pharaoh Zoser’s chief architect, Imhotep (later deified by the Egyptians and then vilified in modern movies).

Despite its primitive step-sided appearance, it’s still an impressive 60 m (197 ft) high and represents the earliest cut-stone monument in the world. Look for a line of rearing cobras in the Great South Court — an early symbol of pharaonic power.

From there, head to Dahshur, where you can see the Red Pyramid and the Bent Pyramid, so named because its sides change angles halfway up. Majid explained that scientists think it’s because the lower, steeper slope was too unstable.

This is also one of the rare places that you can enter a pyramid. You have to back down into the narrow passage and climb down a ladder. It’s intensely hot and close as you wander through empty stone-walled chambers. I imagined I could feel the weight of the sand and stone above my head, giving me a shiver of claustrophobia despite the passageways that extended far up into the dark. The slightly eerie atmosphere was enhanced by the fact that I was the only one down there. 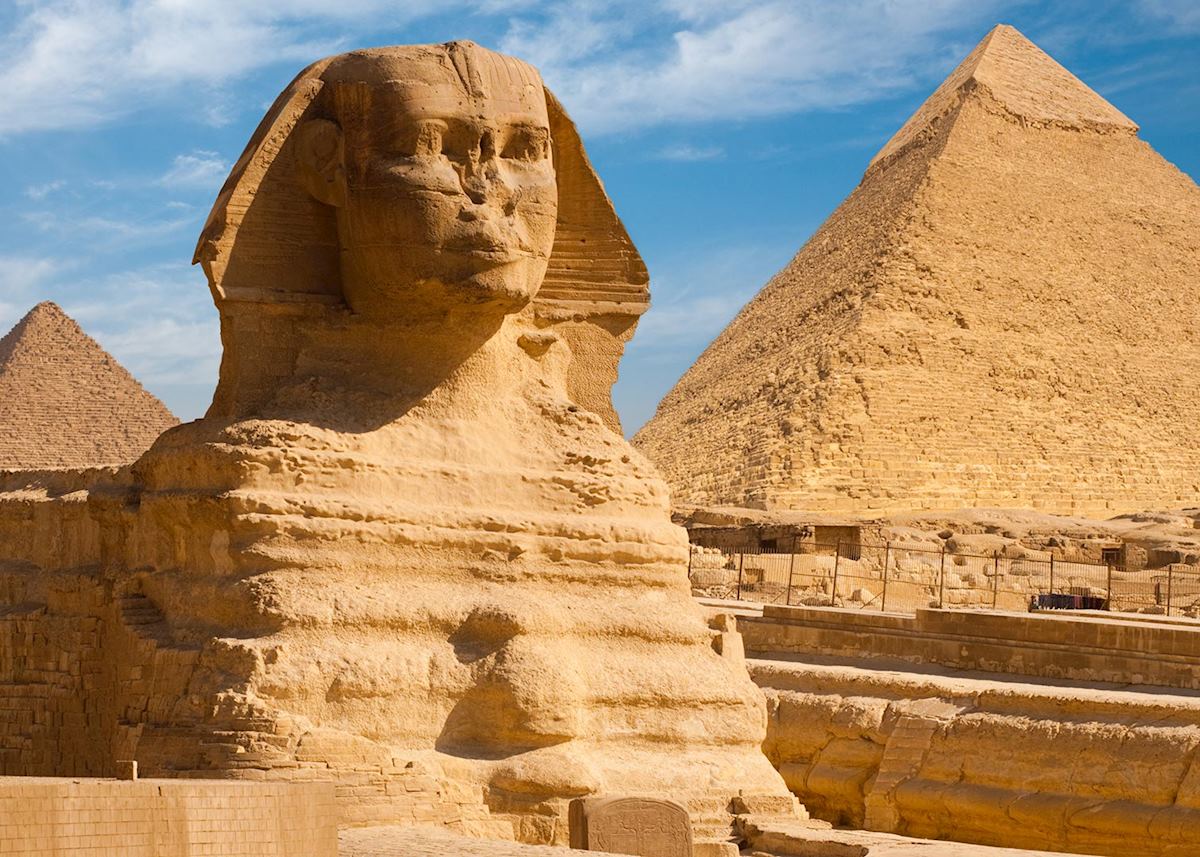 The climax of the tour was the pyramids and Great Sphinx of Giza. I was stunned by the sheer size of even the smallest, though it was dwarfed by the Great Pyramid, which soars 147 m (481 ft) into the blisteringly blue sky.

Of course, the pyramids have been scoured of their treasures over the course of 4,600 years. To see those, you need to visit the Museum of Egyptian Antiquities, a vast building that contains not only burial objects but also everyday tools and a panoply of mummies, including pharaohs, cats and crocodiles.

A guide is imperative here, since the museum is a bit chaotic and cluttered. Majid often pointed out objects — glittering coronation jewels or an important sarcophagus, for instance — languishing in a dark, out-of-the-way corner.

The most popular exhibition is the collection of funerary goods from Tutankhamun's tomb. Though he only ruled for eight years, his tomb was laden with a staggering amount of gold, including three large ceremonial beds with animal heads, an inlaid throne and the statues guarding the burial chamber, among many others.

But for me, the most thrilling moment was the chance to see the young king’s well-known death mask, with his winged eyes staring at me from the past.

Cruise between Luxor and Aswan

Aside from the pyramids, Egypt’s greatest sights are clustered along the Nile between Luxor and Aswan. The river can look a bit urban in Cairo, but away from the capital, it’s wide and blue, with a green shore shaded by palms and the occasional cow grazing on one of the tiny reed islands.

I think a cruise down the Nile is the best way to see these great monuments, which include Karnak, Luxor, Edfu and Philae temples. Most boats stop twice a day for passengers to disembark and explore, and between the stops you can sit on the deck and admire the unspooling desert scenery. 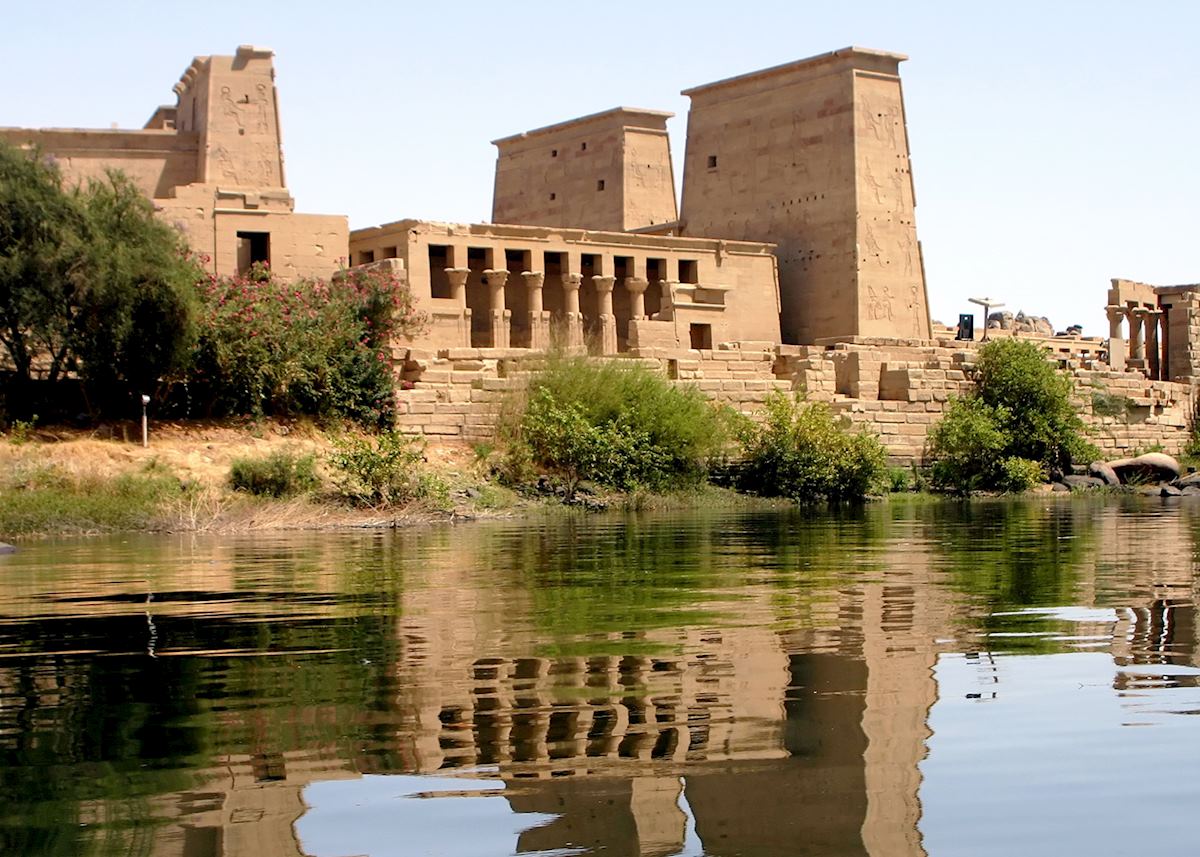 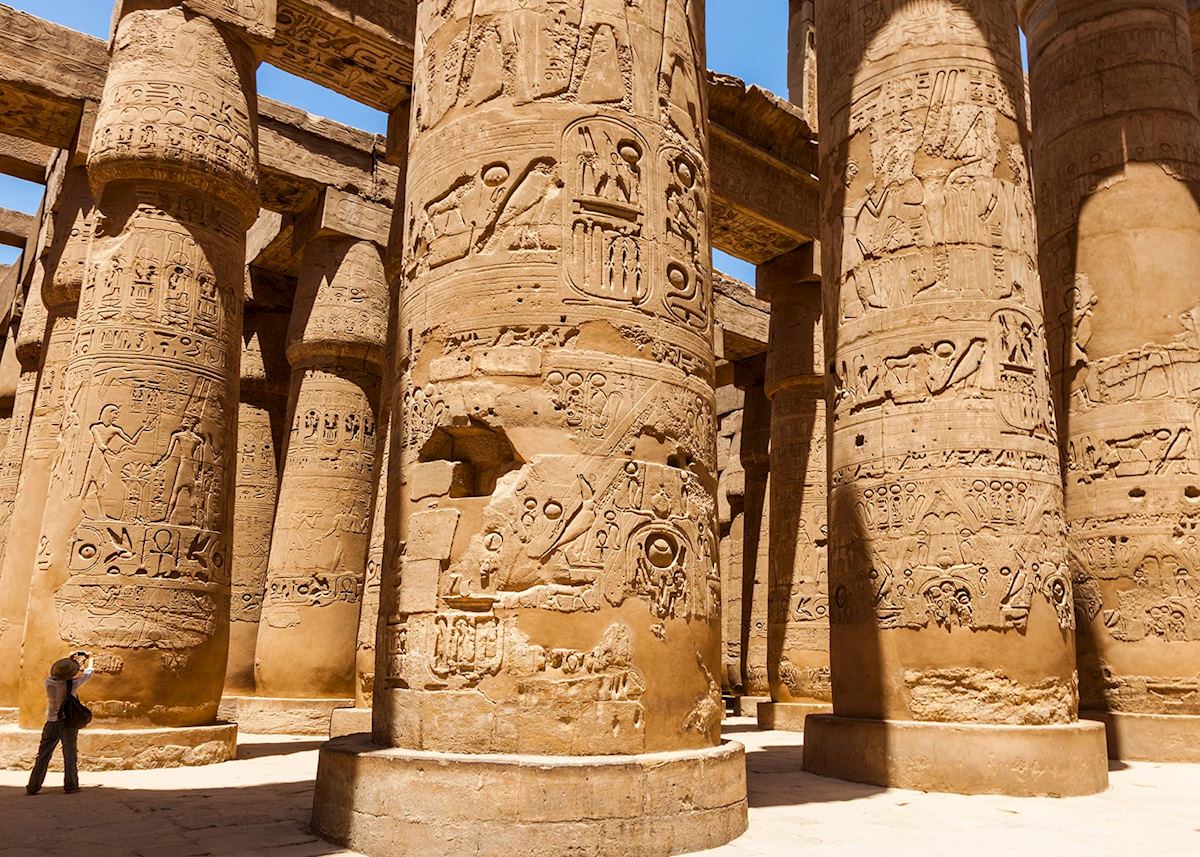 We can arrange a cruise to suit you, from three days on a large, indulgent ship that hits the highlights, to a leisurely week on a smaller, simpler boat that can dock in out-of-the-way destinations. Looking for an intimate experience, I chose a dahabiyya, a shallow-bottomed vessel with two sails and just a few cabins.

The most impressive sights on any cruise are those near ancient Thebes, now known as Luxor, which you can explore on a tour of the East Bank. Luxor Temple is right in the heart of the town, with carved pillars and massive statues of gods standing incongruously next to modern roads.

The entrance to the complex is the start of the Avenue of Sphinxes, a road that once linked it with Karnak. Only a fraction of the feline-bodied creatures remain, but I found their unblinking ranks a bit unnerving.

Just 3 km (2 miles) to the north, Karnak is no less impressive than its counterpart. The hypostyle hall here features 134 wide soaring columns, some engraved with larger-than-life hieroglyphs or topped with heavy lintels.

If you can, make a point of returning after sunset, when the complexes are lit up. The low modern lighting manages to evoke the oil lamps that would have been originally used.

Though it’s less immediately impressive than the temple complexes, I prefer visiting the Valley of the Kings on the West Bank, across from Luxor. The small doors in the cliff faces lead to 63 different tombs, including those of Tutankhamun, Ramses II and III, and the female pharaoh Hatshepsut.

Sealed away from the bleaching rays of the sun, these tombs still boast pigments that are vivid after almost 4,000 years. Intended to help the tombs’ residents navigate to the afterlife, the decorations come in clean whites, rich browns, sunny yellows and deep rusty reds.

Resting and snorkeling at the Red Sea

The Red Sea offers a relaxing bookend to your trip after a busy schedule of sightseeing and sand. It’s easy to reach from Luxor, either via a short flight or overland, and the waterfront hotels combine golden-sand beaches and coral reef snorkeling with well-appointed rooms and exceptional restaurants.

For the most comfortable stay, I suggest the Oberoi Sahl Hasheesh in Hurghada, four hours east of Luxor. The suite-only hotel has an Arabesque inspired decor, manicured grounds and attentive service, as well as two restaurants that feature fresh seafood on their menus.

Read more about combined trips to Jordan and Egypt 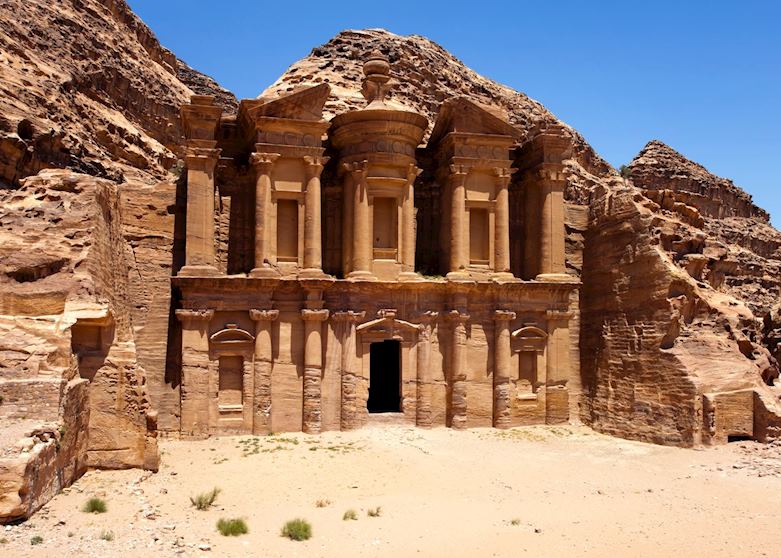 What to do in Egypt: our highlights guide Nile cruises: the route to ancient Egypt Explore the mysteries of Petra Amman for more than one night How to pack for the Middle East