Petra’s history is so improbable that it can seem like a fiction: the capital city of an ancient empire, carved from living stone and tucked into a hidden wadi in the desert, which flourished for centuries before it was deserted and known only to the Bedouin.

Despite this romantic backstory, the city is quite real and arguably the highlight of a visit to Jordan. Located four hours by car from Amman, it’s a huge site that you could easily spend most of a week exploring, so we suggest allotting at least three nights and two days to make the most of it. A morning tour of Petra with a private guide provides a useful introduction, but after that you can explore at your own pace.

Things to see and do in Petra 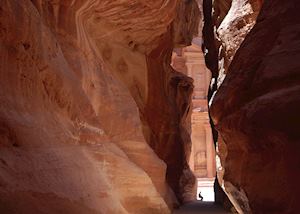 The city reveals itself slowly at first, via a long walk through the Siq — a long narrow canyon that acts as entrance to the ancient city beyond.

The walkway widens and narrows, snaking along through the striated, iron-rich massif for more than 1.2 km (0.75 miles). We suggest entering the Siq at sunrise if possible, when the warm light brings out hints of pink and red in the towering stone.

Walking down the meandering entrance gives you a glimpse into the passageway’s ceremonial and practical uses. Empty niches once held long-vanished statues, and you can still see the remains of millennia-old terracotta pipes that once carried water into this desert city.

Coming around the last bend, the Siq widens suddenly to reveal the Treasury. A tall, symmetrical building carved directly out of the rock face, its Hellenistic façade is probably the city’s best-known edifice thanks to its starring role in Indiana Jones and the Last Crusade.

As with most of Petra, the name is misleading. This wasn’t a treasury but a tomb, as were most of the impressive monuments in the ancient city. Would-be European looters ascribed sites more evocative nicknames in their quest for antiquities.

If you look closely, you can still see bullet holes in the rock where the tomb raiders riddled the building with machine gun fire, trying to trigger any traps before they entered.

Follow the wadi past the Treasury and you’ll find a wall of yet more tombs carved into the stone, some high on the cliff. These suffered flood damage over the millennia and some are almost completely filled with mud. You’ll also see humbler tombs here.

The High Place of Sacrifice

The trail for the High Place of Sacrifice begins just past the Treasury, a steep but accessible climb that takes about 30 minutes. There are no safety barriers, however, so as not to disturb the site, making it unsuitable for those with vertigo or who aren’t confident on their feet. If you choose to make the climb, however, your efforts are rewarded with views over the sandstone mountains, the wadi and the monuments below.

You’ll also see the two tall ceremonial obelisks that were carved from the rock and a well-weathered altar where it’s believed Nabataean priests sacrificed animals.

Once you return down the stairs from the High Place, you’ll see the vast semi-circular theater. Built by the Nabataeans and enlarged by the Romans in the 1st century AD, it slices through some of the older tombs, giving you a clear view into their interiors.

Though it was damaged by an earthquake and later scavenging efforts, it’s easy to comprehend the theater’s enormous size — big enough to hold about one-third of the city’s population.

Past the theater, the wadi widens again to create a fitting stage for the Royal Tombs. These four striking tombs in a row are empty inside, but their intricate construction warrants several hours of exploration. If you’d like to take pictures, they’re most photogenic in the warm light of the late afternoon, when the slanting rays throw the carvings into sharp relief. 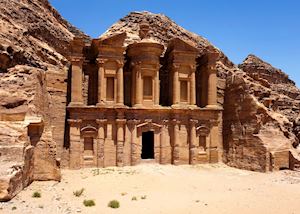 The Monastery sits on a high cliff at the top of a long processional route up more than 800 stairs. Starting your climb in the mid-afternoon means you’ll spend most of the 40-minute walk in the shade, a welcome relief for most people.

At the top, the enormous building is reminiscent of the Treasury in its Greek-inspired split pediments and pillars, though it’s much larger.

After your climb, you can rest and restore yourself in the shade at a tea shop across the plaza from the Monastery, where you’ll also have exceptional views of the façade.

Once revived, you can explore the echoing interior, where you can still see crosses carved into the wall. Experts believe they were a Byzantine-era addition, when the space was repurposed as a church. Their presence has led to the building’s modern-day misnomer.

If you’re looking for an alternative way to explore Petra, we can also offer a scenic hiking experience that enters the site via a back route through the mountains and brings you out at the Monastery, and you can take the stairs down rather than up.

It’s very hot in Petra during June to August, with daytime temperatures that can reach 40°C (over 100°F). If you’re comfortable with that heat, this is a good time to visit — you’re likely to have the city mostly to yourself.

If you prefer more moderate temperatures, we suggest visiting between March and May, when spring flowers bloom in the countryside and the weather is comfortable. March can be cool and a bit rainy, but you’re less likely to deal with crowds.

Our itineraries will give you suggestions for what is possible when you travel in Petra, and they showcase routes we know work particularly well. Treat them as inspiration, because your trip will be created uniquely by one of our specialists.

Our expert guides to exploring Petra

Written by our specialists from their own experiences of visiting Petra, these guides will help you make the most of your time there. We share both our practical recommendations and the best ways to appreciate Petra at its best.

We’ve selected a range of accommodation options for when you visit Petra. Our choices usually come recommended for their character, facilities and service or location. Our specialists always aim to suggest properties that match your preferences.

Our specialists seek out authentic ways to get to know the places that could feature in your trip. These activities reflect some of the experiences they've most enjoyed while visiting Petra, and which use the best local guides.