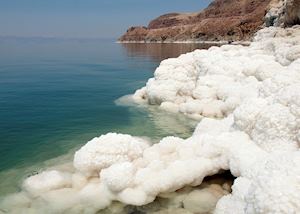 The Dead Sea’s name comes from the fact that the water is so salty that almost nothing can live here. The highly concentrated salt also crystallizes into strange formations — you’ll see jagged stands of spiked crystals encrusting rocks as well as weirdly organic lumps growing from the water. This salt, which also permeates the slick gray mud that you can find in some places at the lake floor, is thought to cure everything from psoriasis to wrinkles. You can buy beauty products to take home at many of the hotels and spas as well as in Amman.

Our expert guides to exploring the Dead Sea

Written by our specialists from their own experiences of visiting the Dead Sea, these guides will help you make the most of your time there. We share both our practical recommendations and the best ways to appreciate the Dead Sea at its best.