The Decapolis was a Graeco-Roman confederation of ten cities in a region now straddling Jordan and Syria. Jerash was a member, and today is probably the best-preserved classical city in the region.

From the dramatic colonnaded agora, you make your way up the cobbled, arcaded street, alongside the ruts made by Roman cart wheels, past their shop fronts and above the sophisticated sewer system that runs beneath the stones. 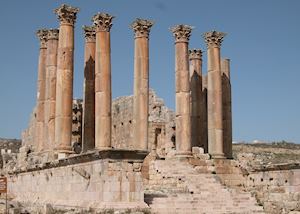 At the far end of the city is the Temple of Artemis, fronted by a small forest of columns, topped with exquisitely carved Corinthian capitals. A short way north of Jerash is another Decapolis city, Umm Qais.

As well as Roman remains, including a unique five-apsed basilica, there are also the ruins of a late 19th century Ottoman village, but the crowning glory of Umm Qais is its amazing location, atop a ridge with far-reaching views over the Sea of Galilee and the Jordan Valley.

Our itineraries will give you suggestions for what is possible when you travel in Jerash & The Decapolis, and they showcase routes we know work particularly well. Treat them as inspiration, because your trip will be created uniquely by one of our specialists.

Map of Jerash & The Decapolis

Places near Jerash & The Decapolis

Photos of Jerash & The Decapolis