Known as Music City, Nashville — in the heart of Tennessee — is a place of pilgrimage for fans of country music. Many legendary artists performed here in the early days of the genre, from Hank Williams to Johnny Cash, Elvis to Dolly Parton. Today, you can tour the Ryman Auditorium, once home to the Grand Ole Opry live radio show, and visit museums dedicated to the stars.

Current musicians head to the honky tonk bars lining Printer’s Alley, where they perform country, jazz and blues to cowboy-booted audiences as artists have done since the 1940s. Away from the lively music scene, you can take a walking food tour to sample Southern delicacies, and explore the area’s history through visits to 19th-century plantations and Civil War battle sites.

I never fail to have a good time whenever I visit Nashville. The whole city has a vibrant energy, fed by its deep musical roots. There’s also a long history to explore, and you can’t leave without sampling some of its Southern cuisine.

Things to see and do in Nashville 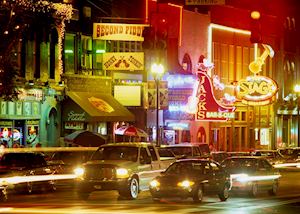 For an introduction to Nashville’s music scene, spend an evening hopping between the intimate live music venues lining the main entertainment district of Broadway or historic Printer’s Alley.

Running between Union Street and Commerce Street in central Nashville, Printer’s Alley has been home to jazz, country and blues bars since the 1940s, most of which defied the alcohol prohibition laws in force at the time. Over the years, these bars have provided a performing space for many musicians, including ‘Nashville sound’ exponents Chet Atkins, Boots Randolph and Floyd Cramer.

Today, there are hundreds of places to choose from along both streets where, with a drink in hand, you can listen to smooth saxophone chords or the strums of acoustic guitars. As you stroll along the streets picking your next venue, music from the latest up-and-coming local talent drifts out through open windows.

Built in 1892 as a gospel church, the Ryman Auditorium is a performance space best known for hosting the Grand Ole Opry live radio show between 1943 and 1974. During this time, early country musicians including Johnny Cash, Elvis and Hank Williams all graced the stage here, earning the venue its reputation as the ‘Mother Church of Country Music’.

You can take a guided backstage tour of the Ryman and learn more about its history and past performances through a number of exhibits, including original memorabilia and signed posters. Your guide will lead you through dressing rooms dedicated to some of the more famous performers, and you’ll get a chance to step foot on the stage for a photograph. There’s also the option to make your own music recording.

If you’re at all interested in country music, we suggest the Country Music Hall of Fame and Museum as your first port of call. Here, temporary exhibitions focusing on specific country musicians can be explored alongside a wider look at the rise of country and folk music from the 19th century to the present day.

Browse the museum’s collection of instruments, costumes, photographs and other original memorabilia and learn more about the music genre through videos and interactive exhibits, including recording booths and songwriting stations.

We also recommend visits to Nashville’s RCA Studio B and the Johnny Cash Museum. Elvis, Chet Atkins, Dolly Parton and the Everly Brothers all recorded songs at the studio. The Johnny Cash Museum has a collection of personal items and memorabilia donated by the musician’s family.

Deep South cooking is one of the most distinctive cuisines in the USA, from meatloaf, brisket and smoky barbecue ribs to fried chicken and catfish. While in Nashville, we recommend you sample some of the city’s culinary highlights on a three-hour walking tour with a local guide.

As you stroll for around 1.6 km (1 mile) through downtown Nashville, you’ll stop at five different eateries to taste a variety of local delicacies. These may include the city’s signature hot chicken (chicken marinated in spicy cayenne paste and fried), barbecued meat and sweet Goo Goo Clusters (bite-size chocolates containing caramel, marshmallow, nougat and peanuts). Throughout the tour, your guide will tell you about the history of Nashville and its cuisine, pointing out key sites you pass along the way. 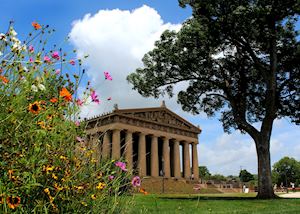 Located just west of downtown, Centennial Park provides a relaxing green space to spend an afternoon away from the busy streets. The park was first opened to the public in 1903 after previous guises as farmland, a race track and the site of an 1897 exposition marking the 100th anniversary of Tennessee’s inclusion in the USA.

As well as featuring landscaped gardens, a man-made lake and a 1.6 km (1 mile) walking trail, the park is home to a full-scale replica of the Parthenon. A focal point of the park, it was restored in 1931 and now houses an art gallery featuring 63 19th- and 20th-century paintings, as well as a 12.8 m (42 ft) statue of the Greek goddess Athena.

Also in the park’s grounds are a historic steam locomotive, a Korean fighter jet and Civil War-era cannons.

Around 20 minutes southwest of Nashville, Belle Meade Plantation is a Greek-Revival-style mansion dating back to the mid-19th century. Once a sprawling thoroughbred horse farm, it was owned by the Harding family, who became one of the largest slaveholders in Nashville.

On a guided tour of the plantation, you can learn what life was like here for both the wealthy owners and the slaves who worked the land and cared for the racehorses. Your guide, dressed in period costume, will lead you around the main house before you explore the grounds and visit the stables, dairy and carriage house. Your tour also includes a wine tasting at the plantation’s winery.

The city of Franklin is just a half-hour drive from Nashville. It was the site of one of the Civil War’s bloodiest battles, which took place on 29th November 1864. Around 10,000 Confederate and Federal soldiers died in the clash, which happened on Franklin’s outskirts.

Today you can visit two sites that were caught in the midst of the battle. The Carter family house became the Federal army’s impromptu headquarters during the fighting, and the Carnton Plantation played refuge and hospital to hundreds of wounded Confederate soldiers.

Touring these restored sites with a guide, you’ll hear about the events leading up to the battle and the roles the house and plantation played. You can also explore the grounds and outbuildings of both sites.

Between April and May and September and October, the warm weather brings out the best of Nashville, with various festivals taking place. These months do therefore attract the most visitors, so expect attractions to be busier. Between June and August the city becomes very hot and humid, which can feel uncomfortable. Meanwhile, winter months (December and January) can get quite cold, with snow a possibility. 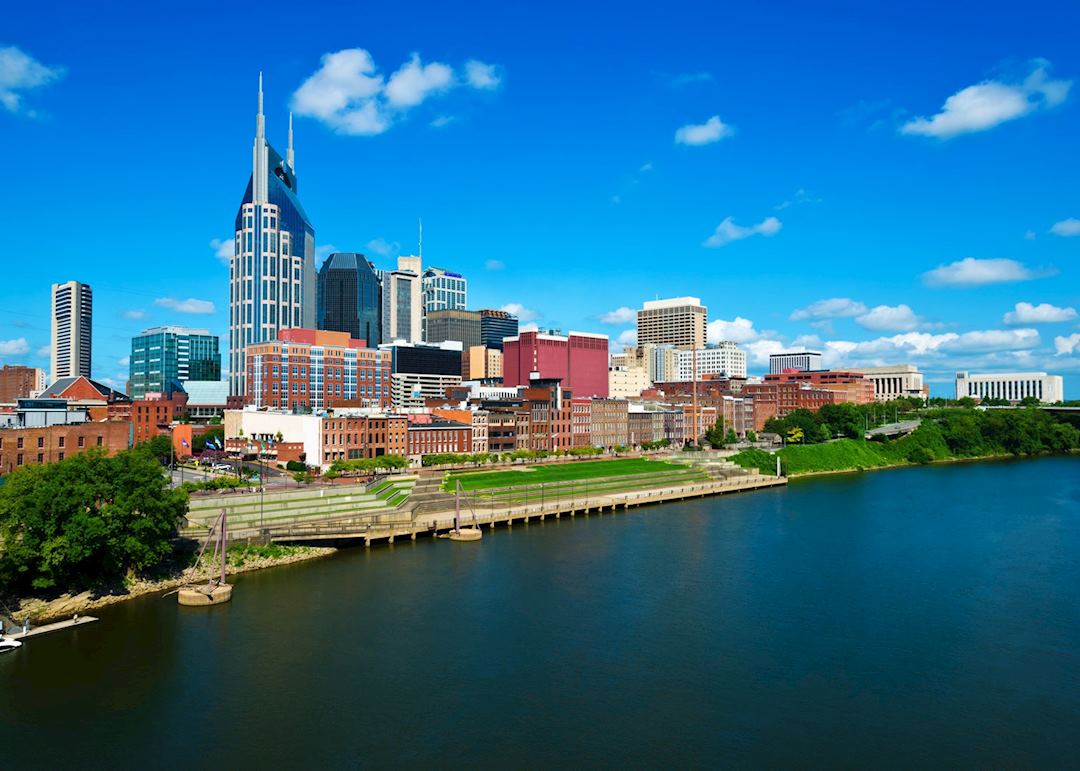 Start planning your trip to Nashville

We’ve selected a range of accommodation options for when you visit Nashville. Our choices usually come recommended for their character, facilities and service or location. Our specialists always aim to suggest properties that match your preferences.