By Vietnam specialist Will

From Saigon, the city of a million motorbikes, to street food in Hanoi and the buffalo working in the paddy fields to sustain another generation of the country’s population, Vietnam’s breadth of cultural experiences is what draws honeymooners to this particular corner of Southeast Asia.

Vietnam has an entrenched romance to it, stemming from the food, the history, the temples and the open nature of the people who live there. It also boasts more than 3,400km of coastline with no end of beaches on which to kick back and watch a rather unique world go by, which all combine to make it a fascinating honeymoon destination.

My honeymoon ideas for Vietnam

Saigon at night by motorcycle

Fast-paced Saigon is a highlight of Vietnam, a night owl of a city that turns to the roar of a million mopeds.

Seeing Saigon while riding pillion as the locals do almost feels like an exhilarating rite of passage. It’s also a way to explore areas that wouldn’t be possible on foot.

So, my first recommendation would be to go on an evening tour of Saigon on the back of a Vespa motorbike with a local guide who’ll take you on an adventure through the smaller alleyways that you’d never otherwise find.

During the tour you stop to try local foods at various street stalls, cafés and bars. The enormous pancake I tried, made from rice batter and crackling with heat when served, still sticks in the mind.

You can then choose where to take your evening, either listening to live local music or heading to a club, or just back to your hotel.

To get the most out of the experience, I’d simply say be adventurous and embrace it all – the noise, the flavours, the speed and the music.

Many honeymoons start by flying into Hanoi, and it’s a very different city to Saigon.

Where the grandiosity of the latter once made it the ‘Pearl of the Orient’, Hanoi retains the charm of a provincial city on the banks of the Red River.

The city also has a reputation for its street food, and while there are many street food tours in Hanoi, local blogger Mr. Tu (whose blog Vietnamese God gives high hopes) has been writing about Hanoi’s best from-the-street food exponents for more than 12 years.

As such, he has an intimate knowledge of the best places to eat and markets to explore, as well as the history of local ingredients.

The beauty of this tour is that it’s not just about the food. While following your nose, you walk around a city that’s very distinct from other capitals, where the bustling atmosphere juxtaposes with French colonial influences in the form of tree-lined boulevards and readily available baguettes.

Hanoi in the early morning is a very different prospect to the city at night. The working day is preceded by people enjoying dance classes and playing sports, such as badminton and football, in outdoor spaces.

An early-bird tour at around 5.30/6.00am takes you around the city on a ‘cyclo’, similar to a rickshaw, and you get a sense of what it’s like to live there.

Part of the experience is watching the flag-raising ceremony, a national ritual that’s conducted every day in front of the President Ho Chi Minh Mausoleum in Ba Dinh Square.

There’s quite a lot of pomp and circumstance around it all but it gives you an idea of how proud the Vietnamese people are of their heritage, and how much stock they put by the flag itself.

When you’re in Vietnam, you drive past thousands of paddy fields every day and never really know what happens in them.

A more unusual honeymoon experience, and one that really gives an insight into rural life in Vietnam, is a hands-on rice growing tour in Hoi An.

You don traditional dress, right up to the conical hat, and overalls to experience ploughing the fields, harvesting the rice and grinding it to rice milk.

Highlights include riding the buffalo (if you’re feeling brave) and trying out all the weird and wonderful things you can make with rice – pancakes, crackers and a number of delicacies, which all provide pivotal parts of the Vietnamese diet.

This experience gives you an idea of the dedication Vietnam’s farmers put into working the land, along with a glowing feeling when you get to eat the fruits of your labour at the day’s end with a local farmer and his family.

Private dining in a cave

All the coastal hotels in Vietnam have the knack of providing excellent private dining on the beach, which is a classic dash of romance to a honeymoon.

Turning the concept on its head a little, Fusion Maia in Da Nang, just north of Hoi An, also provides breakfast on the beach, allowing you to enjoy the surroundings of the famous South China beach peacefully, away from the crowds first thing in the morning.

Nonetheless, the private dining experience that really stands out for me is at Six Senses Ninh Van Bay, where you can dine alone together in a cave.

Originally used as a wine cellar, the hotel has extended the area out and opens it for the exclusive use of couples on their honeymoon to have a romantic meal for two.

In the otherwise hot location, the temperature is cool, and, combined with the lighting and ambience of the natural space, it’s a really memorable end to a honeymoon in Vietnam.

Nha Trang was one of Vietnam’s first beach resorts, now a lively place serviced by its own airport. The Six Senses is 40 minutes by car then an exhilarating 20 minutes by speedboat. The resort is set on a horseshoe-shaped beach of golden sand with a mountainous backdrop.

Where to stay on honeymoon in Vietnam

As well as the Six Senses Ninh Van Bay, a second Six Senses resort in the south, on the Con Dao archipelago, lends itself to a honeymoon or romantic holiday.

Once the domain of political prisoners (as a penal colony while under French rule), the islands have begun to turn heads for Vietnam’s leitmotif, natural beauty.

In a classic horseshoe bay, Six Senses Con Dao sits on a beach that gradually declines into the transparent sea, although the hotel’s rooms all have private pools for swimming as well.

Set in Con Dao national park, the amount of wildlife in the vicinity is perhaps one of the best highlights when staying at Six Senses Con Dao. Giant black squirrels navigate the treetops and long-tail macaques wait to whip your sunglasses off your head.

The best time to honeymoon in Vietnam

Broadly speaking, Vietnam is a year-round destination, depending on how you want to spend your honeymoon. The high season, from February to August, brings heat and humidity across most of the country except the far north, while September and October tend to be the wettest months.

The geography of the country is such that mostly it will be warm and dry somewhere. The norm in the south, for example, is clear skies and sunshine even in December. That said, I’d recommend honeymooning in Vietnam any time between March and May to pretty much guarantee great weather, wherever you go.

Start planning your honeymoon to Vietnam 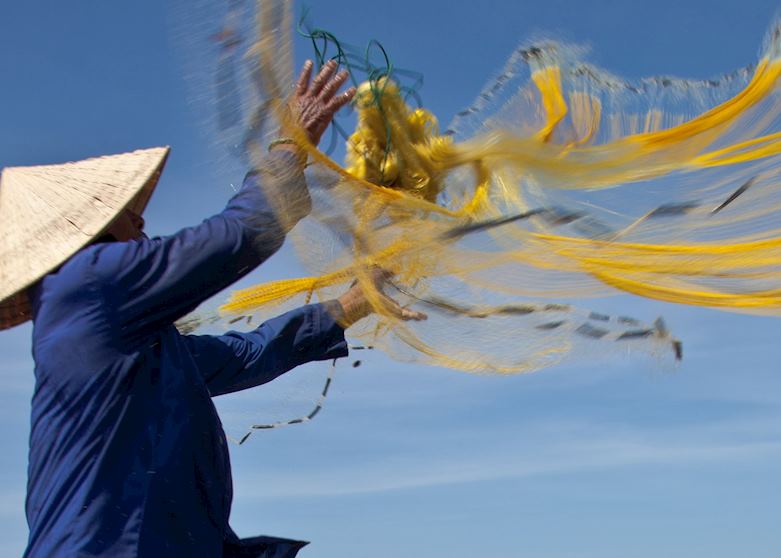