Medieval castles, world-renowned artwork and an eclectic range of culinary delights, all in Ghent 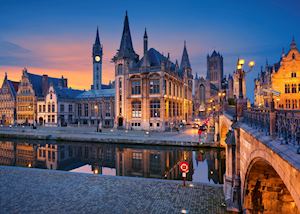 A belfry soaring high above the step-gabled rooftops. A cathedral housing a world-renowned altarpiece. The serpentine trail of the Leie River. Ghent is perhaps less well-known than Bruges or Antwerp, but it offers a long and important history as the former capital of Flanders and one of the most important cities in Europe during the Middle Ages.

Today, its historic district has been lovingly restored and stands proudly along the banks of the Leie River. With fewer visitors, Ghent allows for an authentic view of regular life in Belgium, while still offering attractions like medieval castles, museums and a thriving local food scene. We can arrange for you to delve into the city’s history with an expert guide, take a private boat tour along Ghent’s canals or take day trips to the battlefields of World War I, including Flanders Field.

Ghent is in the western region of Belgium in Flanders, about 30-45 minutes from Bruges, Brussels and Antwerp.

Things to see and do in Ghent

Looming over Veerleplein Square is Gravensteen Castle, a medieval fortress built in 1180 for Philip of Alsace and used as the residence of the counts of Flanders for more nearly 200 years. Since 1353, it has served a variety of purposes, including a jail, court, mint and most recently a cotton mill. The castle was then restored in the late 1800s and opened to the public.

The castle is half-surrounded by a moat, and you can enter the property through a long tunnel on the street side. You can explore the grounds and climb the narrow, twisty stone steps to the top of the castle for panoramic views out over the rooftops of Ghent. There's also an audio guide available, narrated by a local comedian, to bring you through the museum exhibits that detail life in medieval times. 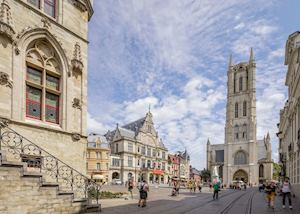 A massive Gothic cathedral, Saint Bavo’s is named for the 7th-century saint from Ghent, who went from wealthy merchant to missionary and hermit. Construction began in 1274 and continued for hundreds of years as expansions were continuously added.

The cathedral is also home to the world-renowned altarpiece The Adoration of the Mystic Lamb, a colossal collection of panels that depicts holy scenes, acclaimed for its incredibly intricate detailing. The central panels on the top row feature paintings of the Virgin Mary and John the Baptist flanking a portrait of either Jesus Christ or God, though scholars disagree on which it is. Other panels include angels singing, Adam and Eve and pilgrims paying homage to the lamb of God.

Rising 91 m (299 ft) into the sky, narrowing into a stone spire and topped with a gilded copper dragon, Ghent’s Belfry is one of the most popular sights of the city. It was built in the 14th century and served not only as a bell tower to announce times, but also as a fortified watchtower.

It has been restored multiple times to accommodate the massive weight of the 54-bell carillon, which chimes every 15 minutes. Unlike many belfries in Belgium, Ghent’s has an elevator to take you to the top, where you’ll be treated with panoramic views out over the rooftops.

The Leie River snakes through the heart of Ghent, splitting the city at the Graslei and Korenlei quays. This area was once a medieval port and has remained lively, with a row of historical buildings and plentiful patio cafés to enjoy the riverside location.

We can arrange for you to see Ghent on a private boat cruise along the Leie where you’ll pass step-gabled rooftops, towering cathedrals and plenty of people sitting by the water’s edge. As you float down the river, you’ll be served Champagne or Belgian beers and a selection of charcuterie, while your guide regales you with tales of the city’s history. 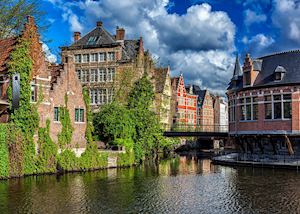 Ghent is known for its food scene, from Michelin-starred restaurants to street stalls that sell treats like the cuberdon, a cone-shaped candy with a gummy outside and a syrupy raspberry inside.

Another local delicacy is the Tierenteyn mustard, sold exclusively at a store called Tierenteyn-Verlent, where the store employee will reach into a barrel beside the counter and fill a bowl size of your choice with freshly made mustard. The mustard, which has a distinct sharp and tangy taste, pairs well with the local meats and cheeses.

We can arrange for you to join a local guide who will take you to some of the most interesting and indulgent spots in the city. You’ll get the chance to try rich hot chocolate, Belgian waffles, frites, different types of cheese, Belgian beer and genever, a popular gin-like Belgian spirit.

There are many museums in Ghent, making it easy to find one that suits your interests. The Museum of Fine Arts houses a large permanent collection of art that ranges from the Middle Ages through the mid-20th century, with a focus on Flemish art. The City Museum for Contemporary Art picks up where the Museum of Fine Arts left off, and focuses on the international developments in art after 1945.

To learn a bit more about life in Ghent, you can visit the Ghent City Museum, which walks you through the city’s full history. Or, you can visit House of Alijn, a former 14th-century hospital that’s now a museum that revolves around local culture and daily life in the 20th century. You can also learn more about the importance of textile mills and trade in Ghent at the Museum of Industry, Labour and Textile.

We recommend visiting between April and June and September and October when the temperatures are comfortable, trees and gardens are in full bloom and cultural events and festivities are taking place. These are the busier months for domestic travel, however, so the city does tend to be a bit busier.

The warmer months of July and August see a slight reduction of visitors, as temperatures in the cities increase and many people head to beachier destinations. The city comes alive in December as the Christmas market kicks off the holiday season, attracting visitors from around the world.

January and February offer the thinnest crowds, but many museums and attractions close for renovations. 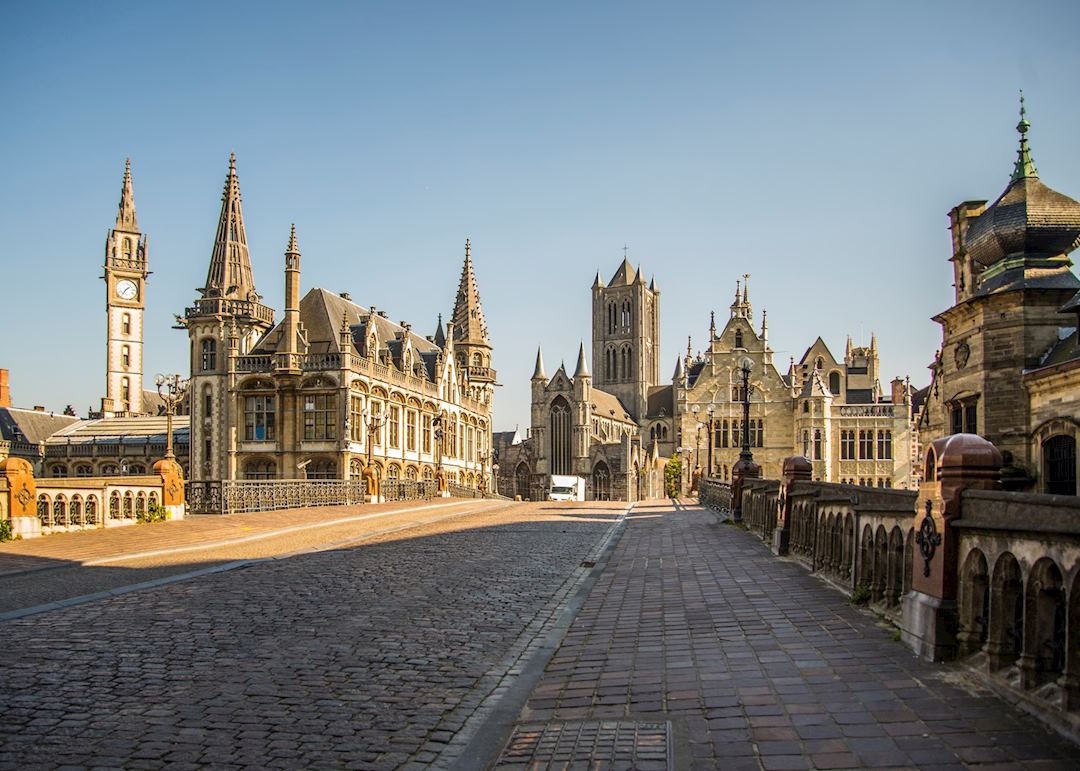 Start planning your trip to Ghent

We’ve selected a range of accommodation options for when you visit Ghent. Our choices usually come recommended for their character, facilities and service or location. Our specialists always aim to suggest properties that match your preferences.

Our specialists seek out authentic ways to get to know the places that could feature in your trip. These activities reflect some of the experiences they've most enjoyed while visiting Ghent, and which use the best local guides.