Myanmar is one of the most talked about destinations of the moment — which is no surprise when you look at these evocative images, taken by our Myanmar specialists. 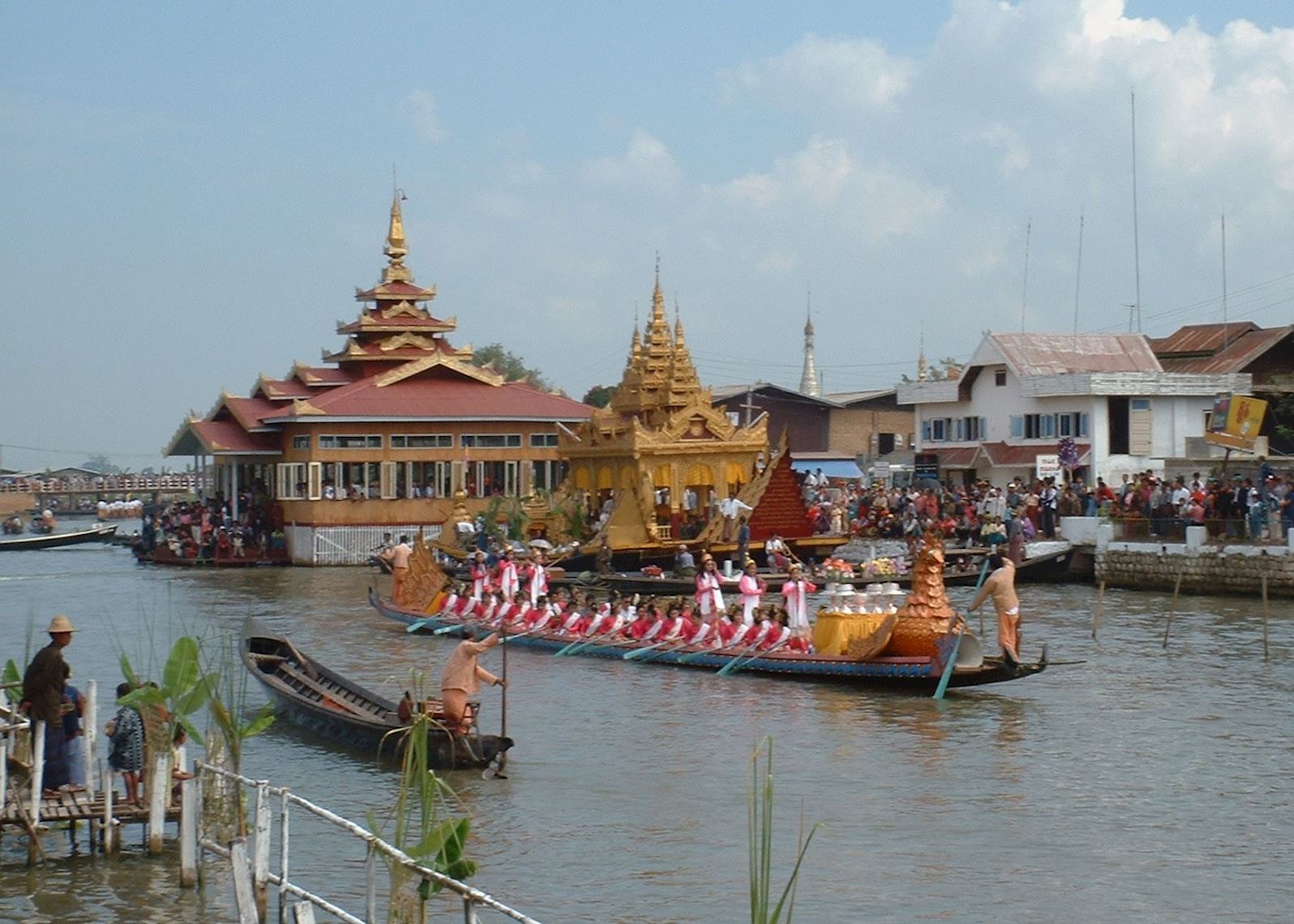 I awoke one October morning while staying on the shores of Inle Lake and opened my balcony doors to be greeted by this beautiful scene. It really captures the magic and serenity of this magnificent place. The mist setting in over the mountains on the horizon and the locals calmly rowing by on their way to market in the foreground really portray what an enchanting and peaceful place Inle can be. All of this was in stark contrast to the exciting, busy and vibrant celebrations of the magnificent Phaung Daw Oo Pagoda Festival — one of the largest Buddhist festivals in Myanmar — which would be taking place elsewhere on the lake later that day.

Serenity at U Bein 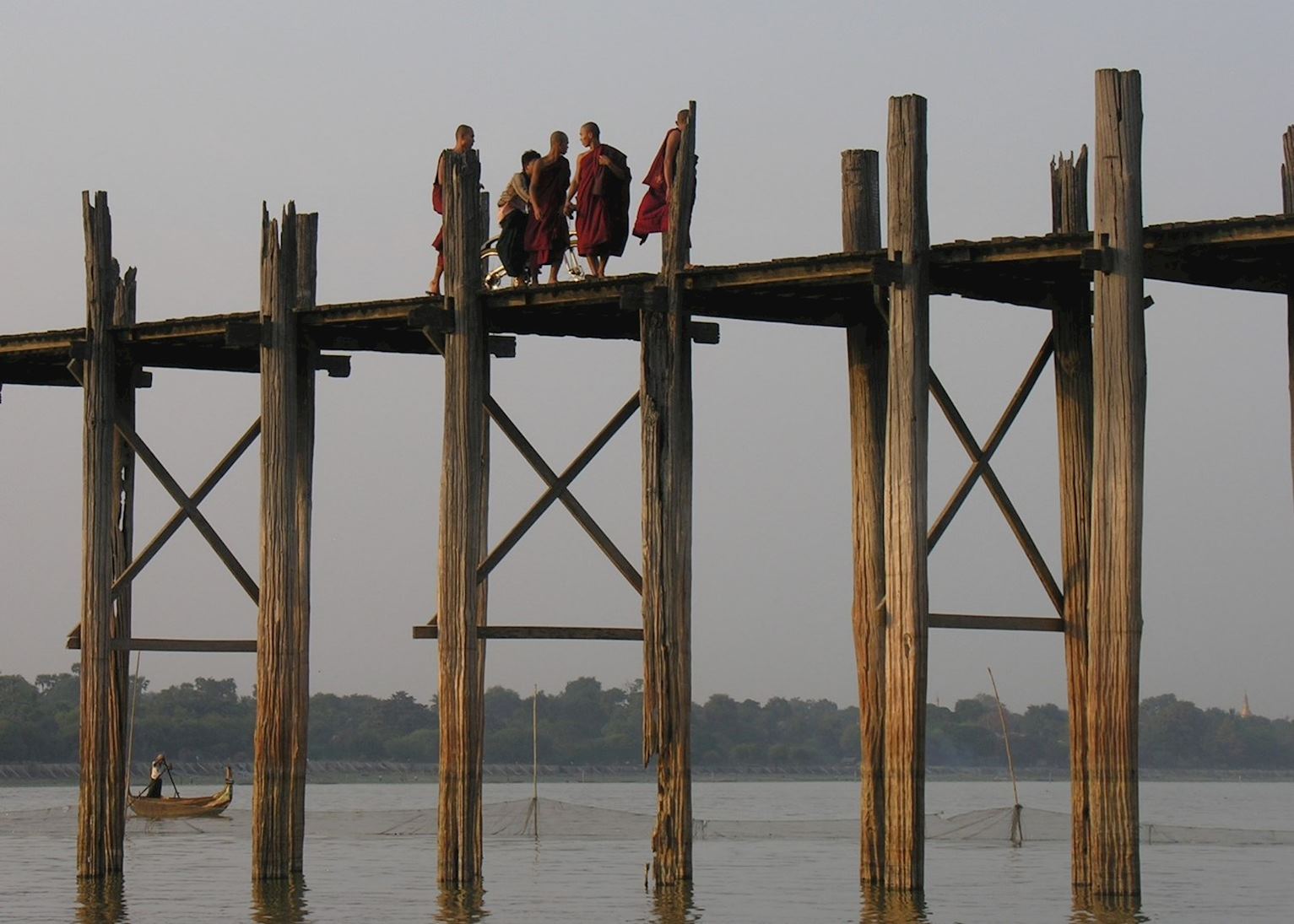 This picture was taken from the U Bein Bridge in Amarapura, on the outskirts of Mandalay. It’s a popular spot as the bridge (built in 1849) is the longest teak bridge in the world (1.2 km) — and everyone wants to cross it. The bridge is starting to wear a bit now, so we recommend that visitors don’t actually walk on it; it’s better to catch a boat out and take pictures of the bridge with the sun setting behind. I like this picture of the young fisherman: the light was beautiful, and it gives a sense of absolute serenity.

Riding the rails with the locals 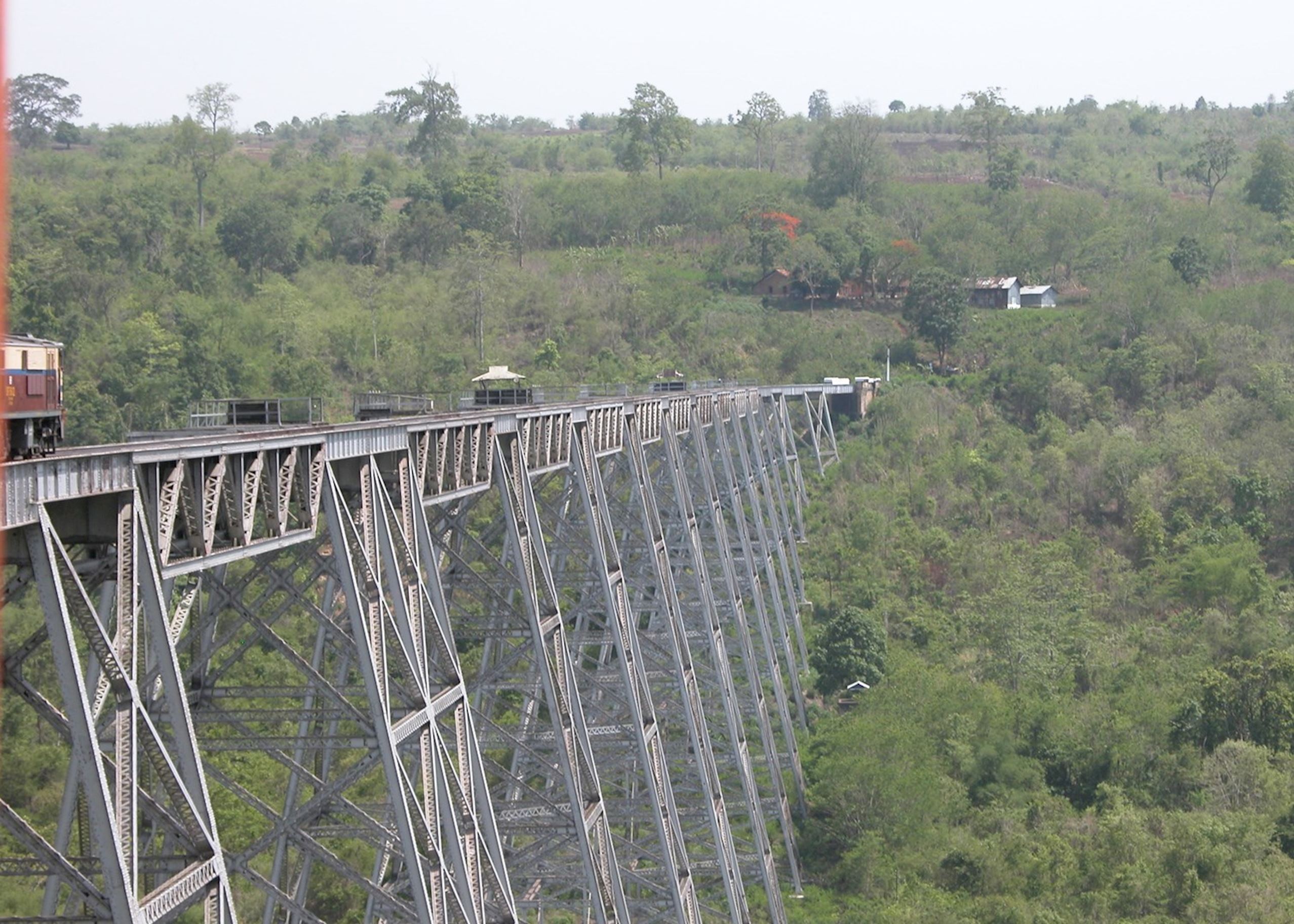 The Goteik Viaduct is located just north of Maymyo, the former British colonial hill station, a few hours’ drive from Mandalay. The train departs from Mandalay around 4am and slowly chugs its way up through Shan State, arriving into Lashio, the last major city on the old Burma road to the Chinese border in the evening. It is possible to join the train for an hour or so to experience crossing the viaduct, which was the second-highest railway bridge in the world on its construction in 1900. If you do you will have the chance to travel with the locals; if you are happy to travel in ‘cattle class’ you really will be in among the many travellers, farm animals and factory goods that fill the train daily. A window seat is a must to appreciate the stunning views as you approach the viaduct. 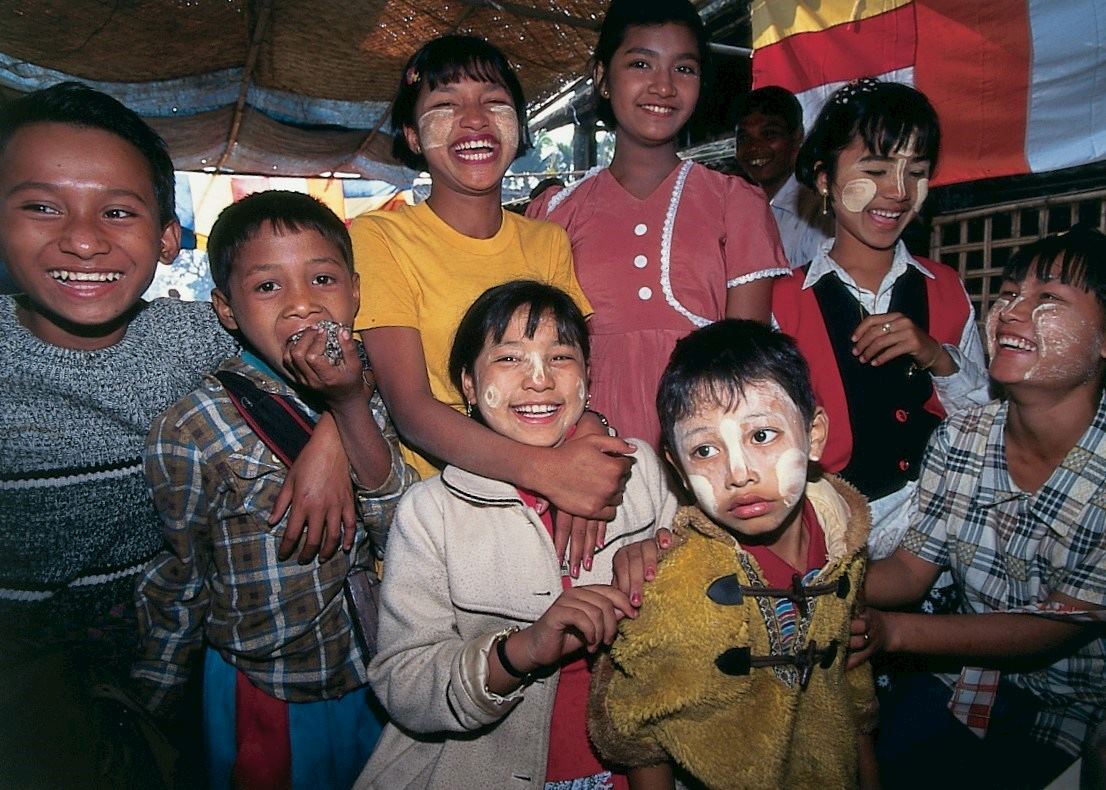 While driving on the road between Monwya and Pakokku we decided to stop and stretch our legs around a small village called Ma-U-Ahle to the west of the Chindwin River. Word soon spread that we were in the village and we were invited to go and look around the local school. Armed with our cameras, we met these children who delighted in having their photographs taken and seeing the magic of their faces appearing on the screen, even though some of them were very shy around us. This photo always reminds me of the warm welcome you receive at every place you visit in Myanmar. It’s also evidence that some of the most memorable experiences happen at the least expected locations. 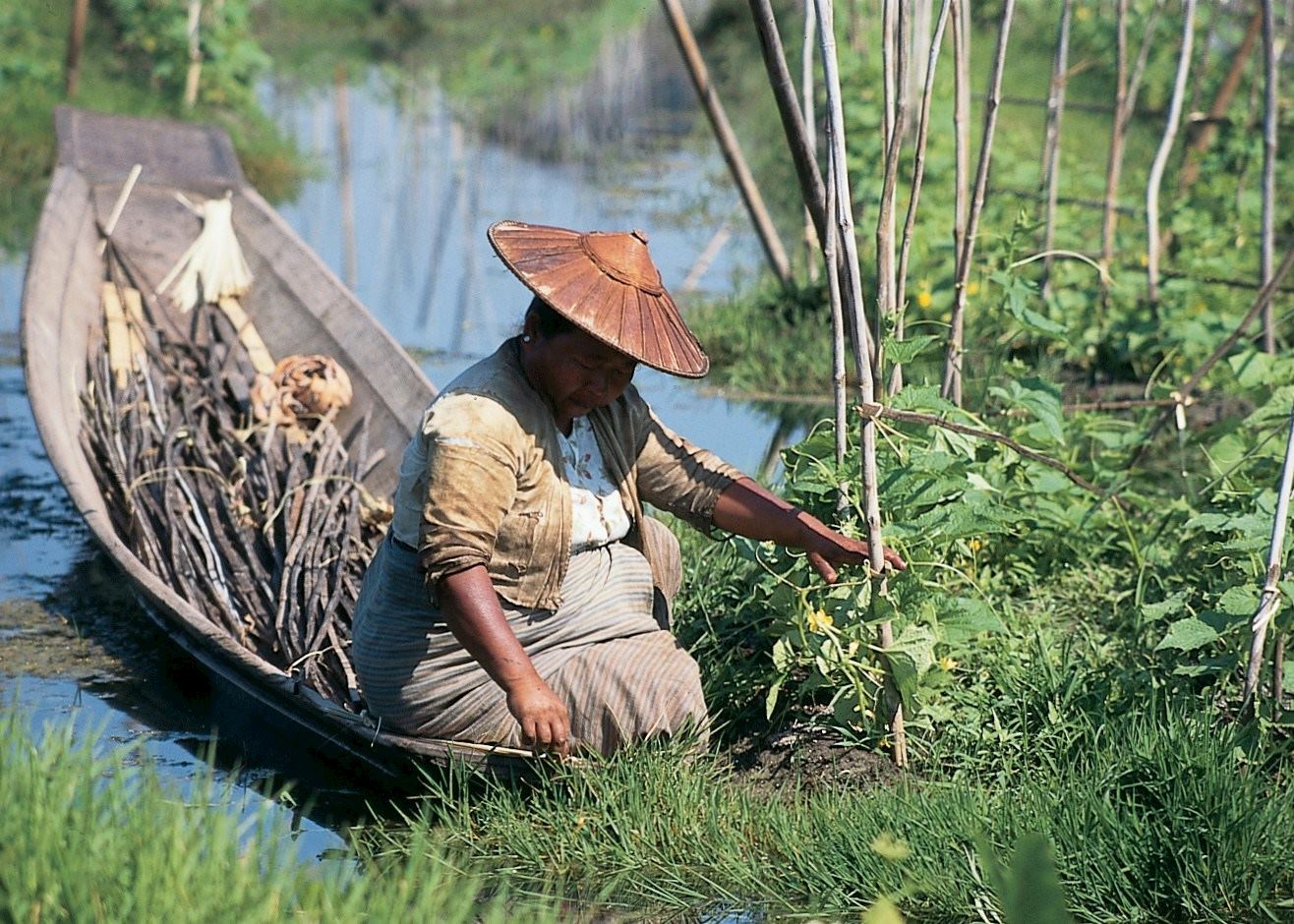 The floating gardens at Inle Lake need constant attention from the farmers in order to keep the crops in prime condition. The locals grow a selection of fruits and vegetables in the large expanses of gardens that float on the surface of the lake. They are formed from a collection of lake weeds that have been brought to the surface by the farmers and worked into many rows. Anchored in place by bamboo poles, which rise and fall with the water levels, the gardens remain very fertile due to the many nutrients. In this photograph you can see endless tomato plants being attended to by a local farmer.

Life on the Kaladan River 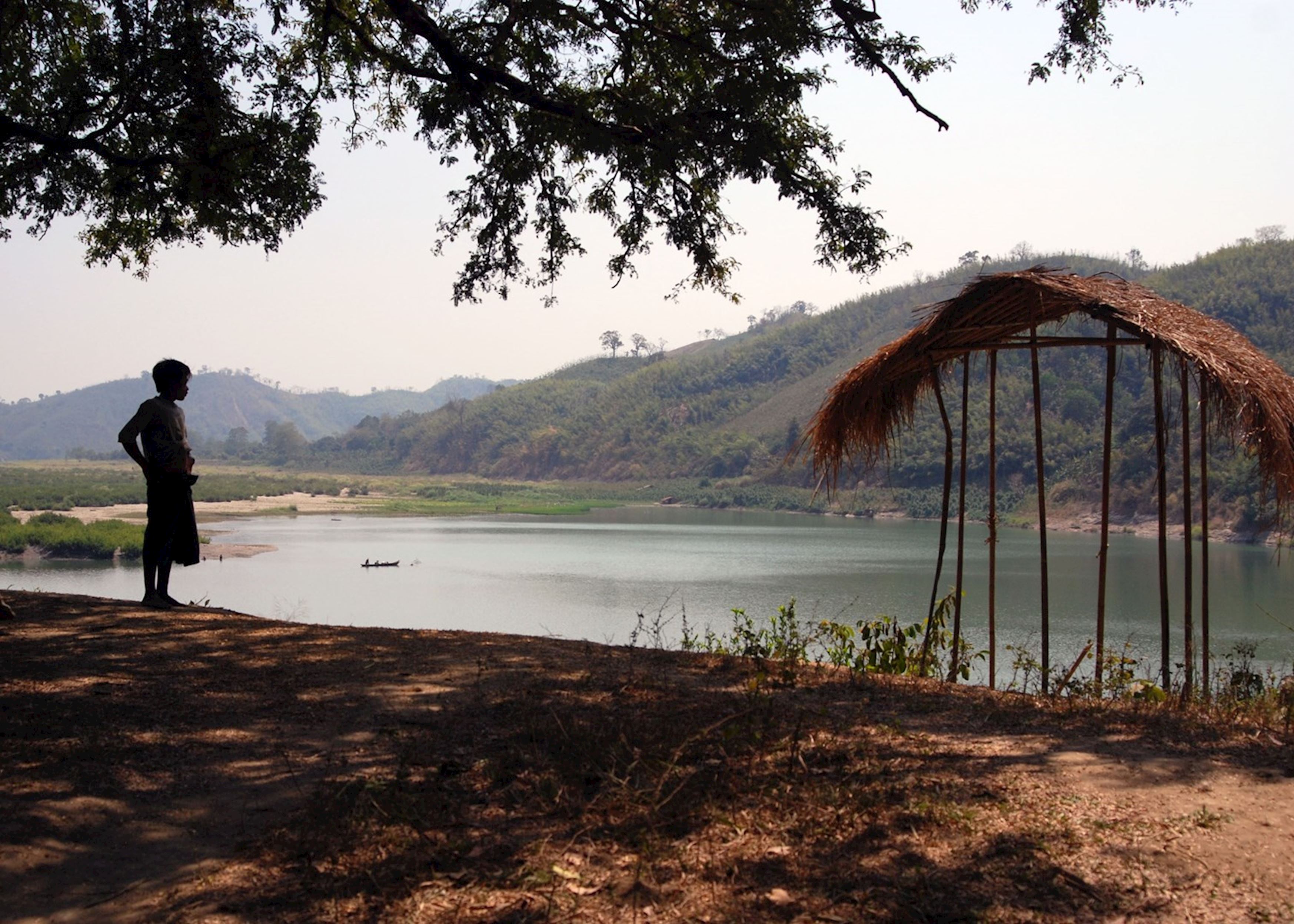 For me, this photo of life on the Kaladan River in Mrauk U really and the timeless feel of this remote and little-visited part of Myanmar. I was just sitting on the riverbank waiting for my boat to arrive, snapping away as Myanmar’s river life eased slowly past me. Though sadly this area is temporarily off limits, it is only a matter of time before it opens up again and more people will get to experience this beautiful part of one of the world’s last exotic outposts. 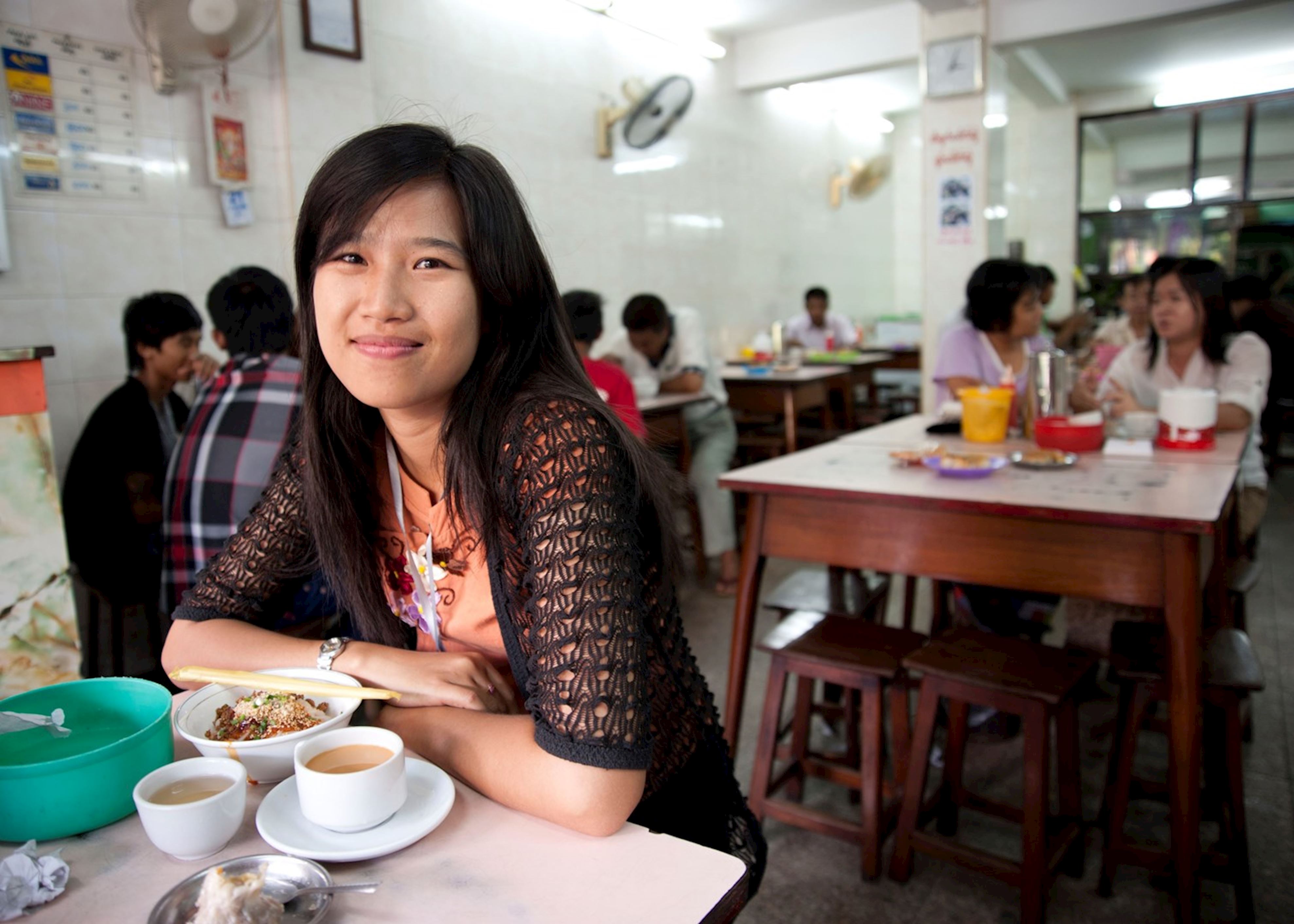 Rangoon (Yangon) is peppered with Indian teashops. After taking in some of the iconic colonial buildings in downtown Rangoon, my guide Nay Kyi and I decided to get out of the sun and into one of these establishments. In Myanmar teashops are popular meeting places and on entering you’ll be greeted by welcoming smiles, the gentle hum of conversations and the whirr of a ceiling fan. If visiting in the early morning I recommend ordering a bowl of Shan noodles; if you’re arriving late morning then a vegetable samosa is the ideal snack. Of course, that’s not forgetting that they are also the perfect place to share a pot of fresh tea.