Whether by bicycle, train, boat, car or just your own walking boots, our specialists show you the five best ways to get off-the-beaten-track and explore the epic scenery and wildlife of New Zealand.

By car with Katie

Driving the meandering roads of New Zealand is a pleasure in itself — not only is there mountainous scenery everywhere you look, but very little traffic too. In fact, the only delays are likely to be caused by sheep in the road! The added beauty of driving is that it gives you the flexibility to stop and investigate the breathtaking scenery you see along the way. 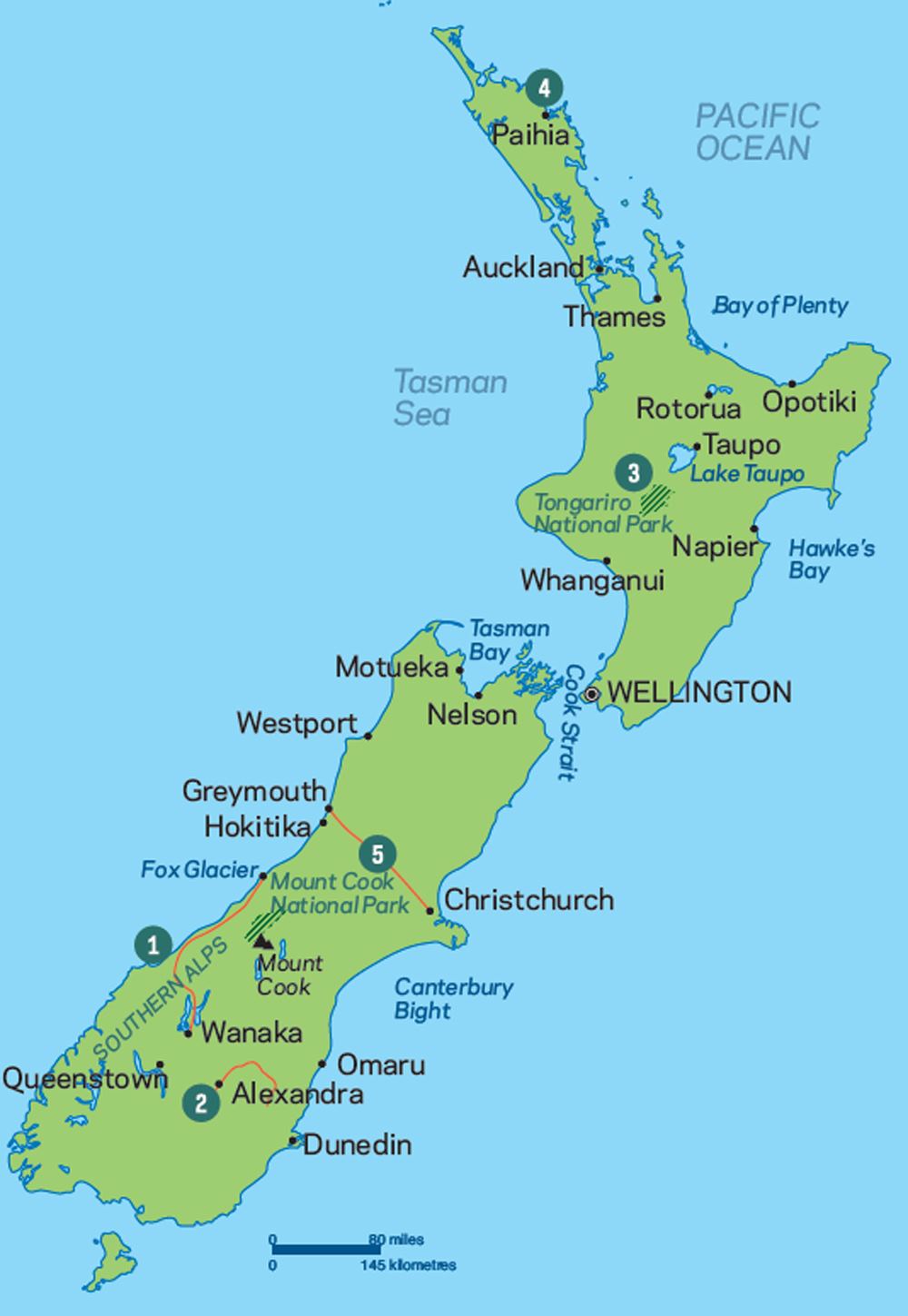 One particularly memorable drive for me was the West Coast Drive (see no. 1 on map), a journey that begun among South Island's glaciers and finished in the beautiful Southern Lakes. There were a few well-known points of interest to stop at, such as historic Knight's Point and the tumbling Haast River, however I also discovered many scenic walking trails signposted, some of which weren't mentioned in our guidebook.

The road initially hugged the coast, with windswept beaches on one side and lush rainforest on the other, while the scattering of houses hinted at the area's remoteness. As we headed inland and wound our way over the Haast Pass the scenery changed to alpine forest and we soon came across The Bushman's Centre, a quintessentially 'Kiwi' curiosity-come-souvenir-shop where possum pies are the local speciality, if something of an acquired taste.

Once over the mountain pass we ambled toward Wanaka, surrounded by the landscapes of Mount Aspiring National Park. The wide roads mean you can pull over and take a photo almost anywhere — and on this journey there were many such stops. I could have done this journey in a few hours, like the locals do, but personally I thoroughly enjoyed taking my time over it.

By bicycle with Hannah 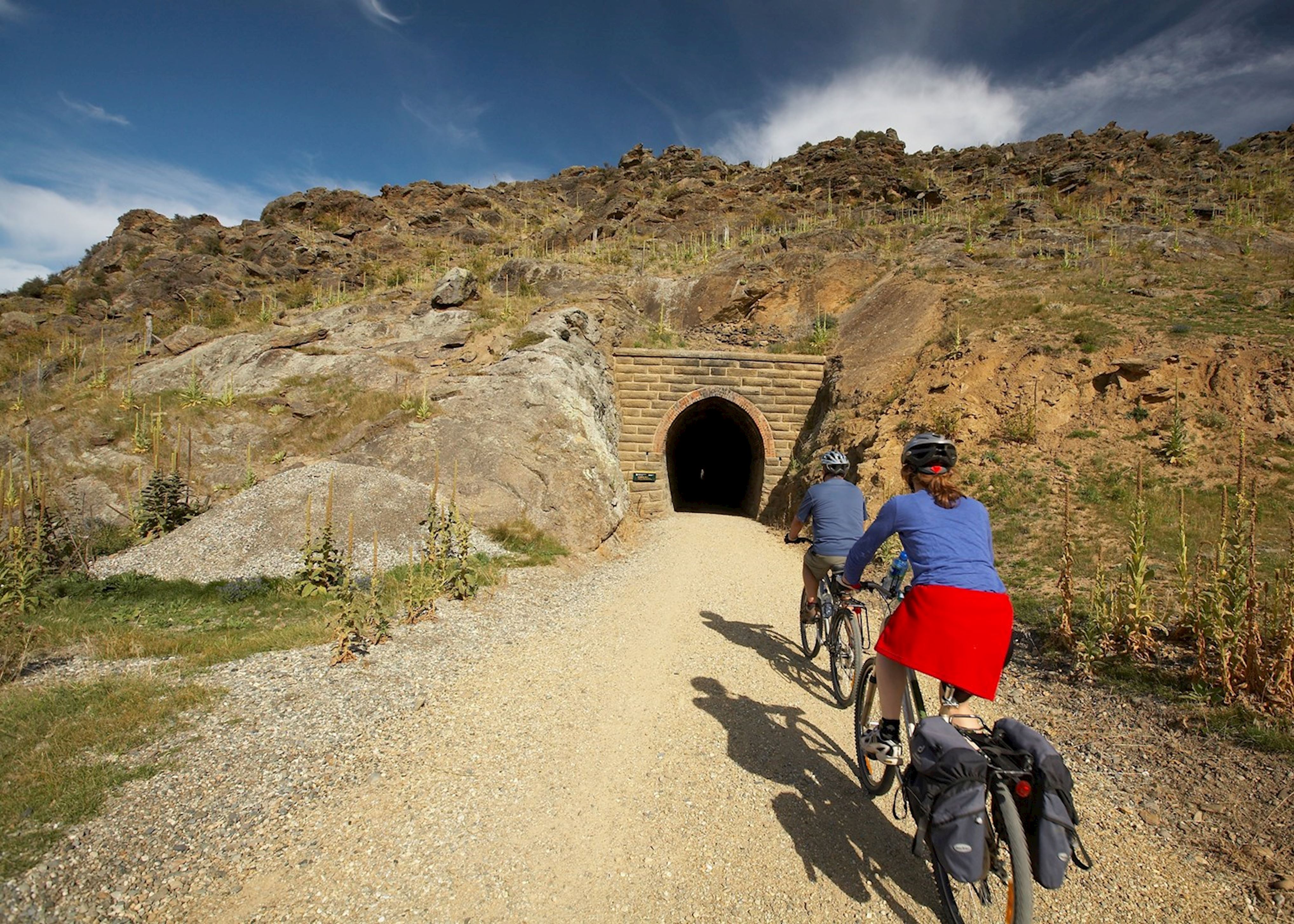 The Otago Central Rail Trail (see no. 2 on map) was one of New Zealand's first 'Great Rides' and is now a well-established and much loved multi-day route across the undulating Central Otago region. Myself and a few friends decided to undertake the 150 kilometre cycle over the Easter weekend, across a landscape of gorgeous colours of burnt ochre and golden browns, complemented by huge blue skies.

People often liken New Zealand to England of old, and the Central Otago region certainly epitomises this — with a very low population and a real sense of 'go slow'; for those three days I felt like I'd stepped straight in to the 1950s. The route follows a once flourishing but now disused railway line, and is characterised by old gold mining settlements that are now friendly townships. We stayed in delightful B&Bs where they immediately sat us down with tea and cake, and told stories of local life along with insights into the rich history of the trail. 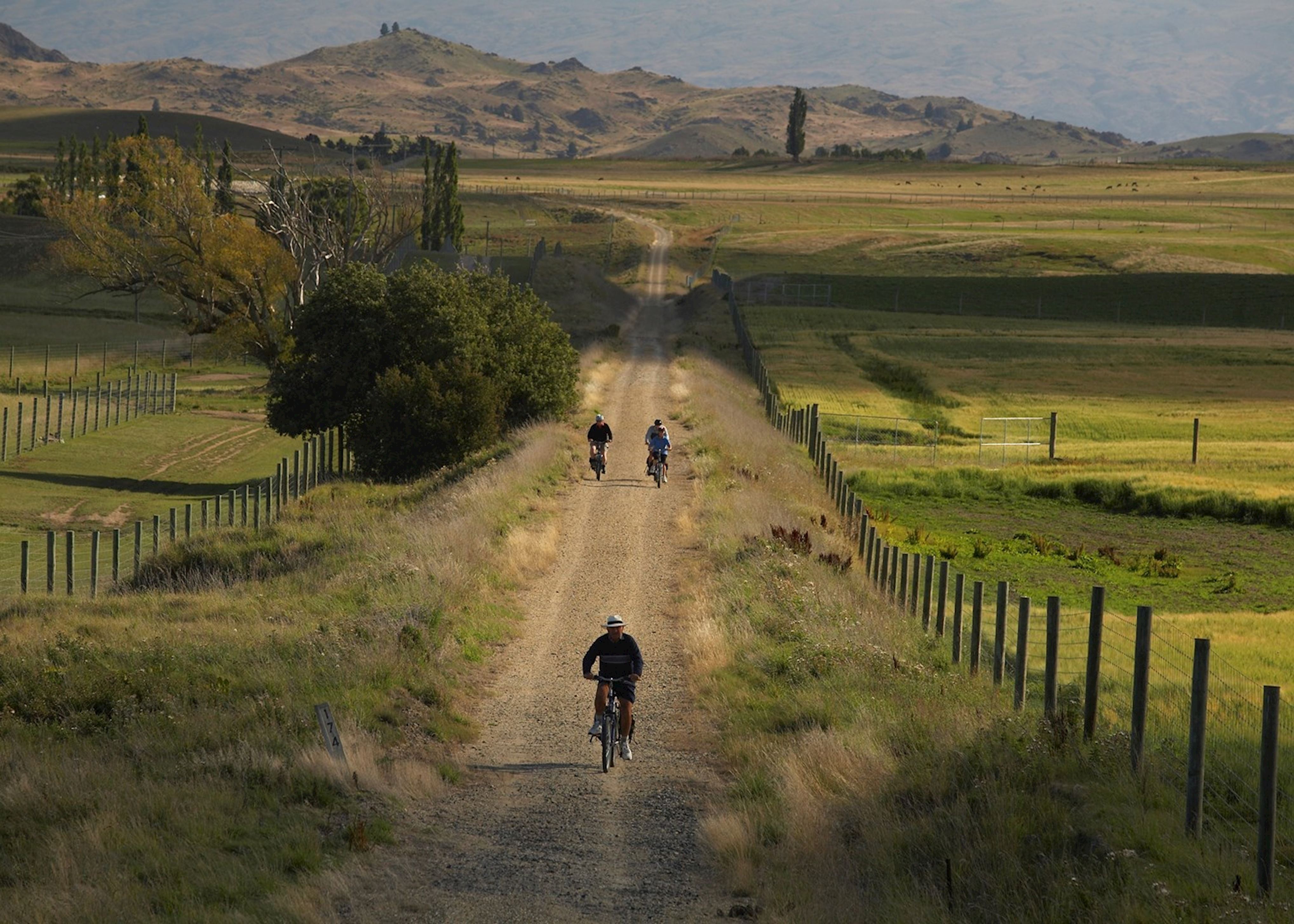 Along the way we browsed a village store where everything — including sweet jars — was stocked on shelves behind the counter. Further on we stumbled upon people picking apples from a tree in their front garden and when we stopped to say hello they encouraged us to grab a few. As my bike had the panniers I was soon laden with fruit that ended up going all the way home with us and making a very nice pie! And on the last day we got talking to a couple in one of the pubs at lunchtime, who took it upon themselves to ensure we made it to the end by waiting in Clyde with cold beers in hand — what fantastic hospitality.

In fact the whole experience was more than just a bike ride; I felt like I had immersed myself in a very unique part of New Zealand, and cycling had been the perfect way to experience it.

On foot with Lucy 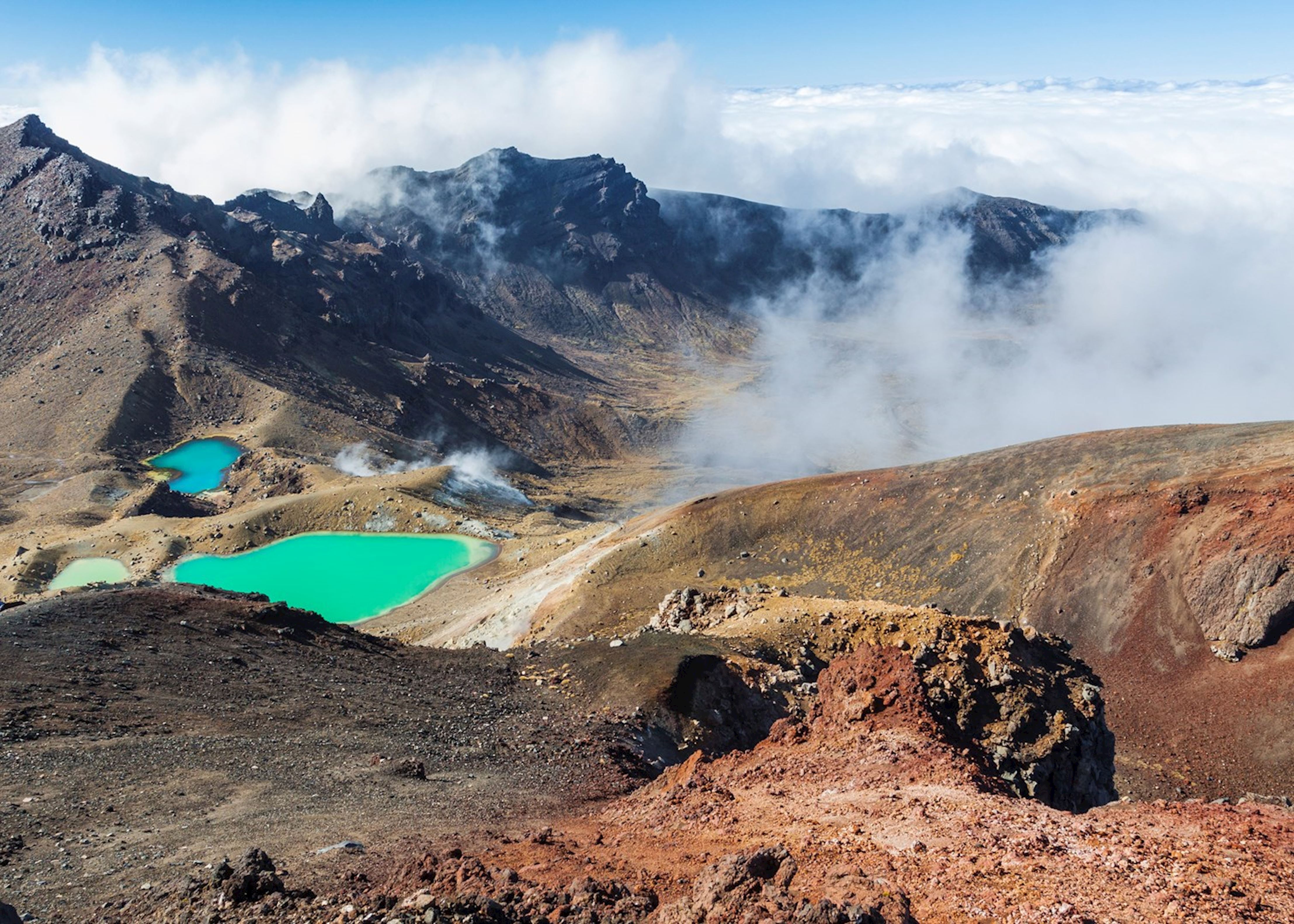 New Zealand is known for its alpine views, and one of the best ways to become a part of this scenery is to don a pair of boots. There are many established tracks around the country but the one that really made me fall in love with New Zealand was the 19.4 kilometre Tongariro Alpine Crossing (see no. 3 on map). I set off along a well-maintained boardwalk on a sunny Saturday morning in April. The lower valley, from Mangatepopo car park up to Soda Springs, was idyllic and fairly flat, as I skirted along the edge of an old lava flow.

Then came the challenge. From Soda Springs to the Red Crater, a relatively short stretch, the gradient shifted and I climbed over 500 metres along the aptly named 'Devil's Staircase'. It was at this point that the infamous biting alpine winds picked up and battered my group of walkers all the way to the 1,886 metre peak of the track. Typically, this spat of icy weather didn't last long and I was left to appreciate the spine-tingling views from the top. 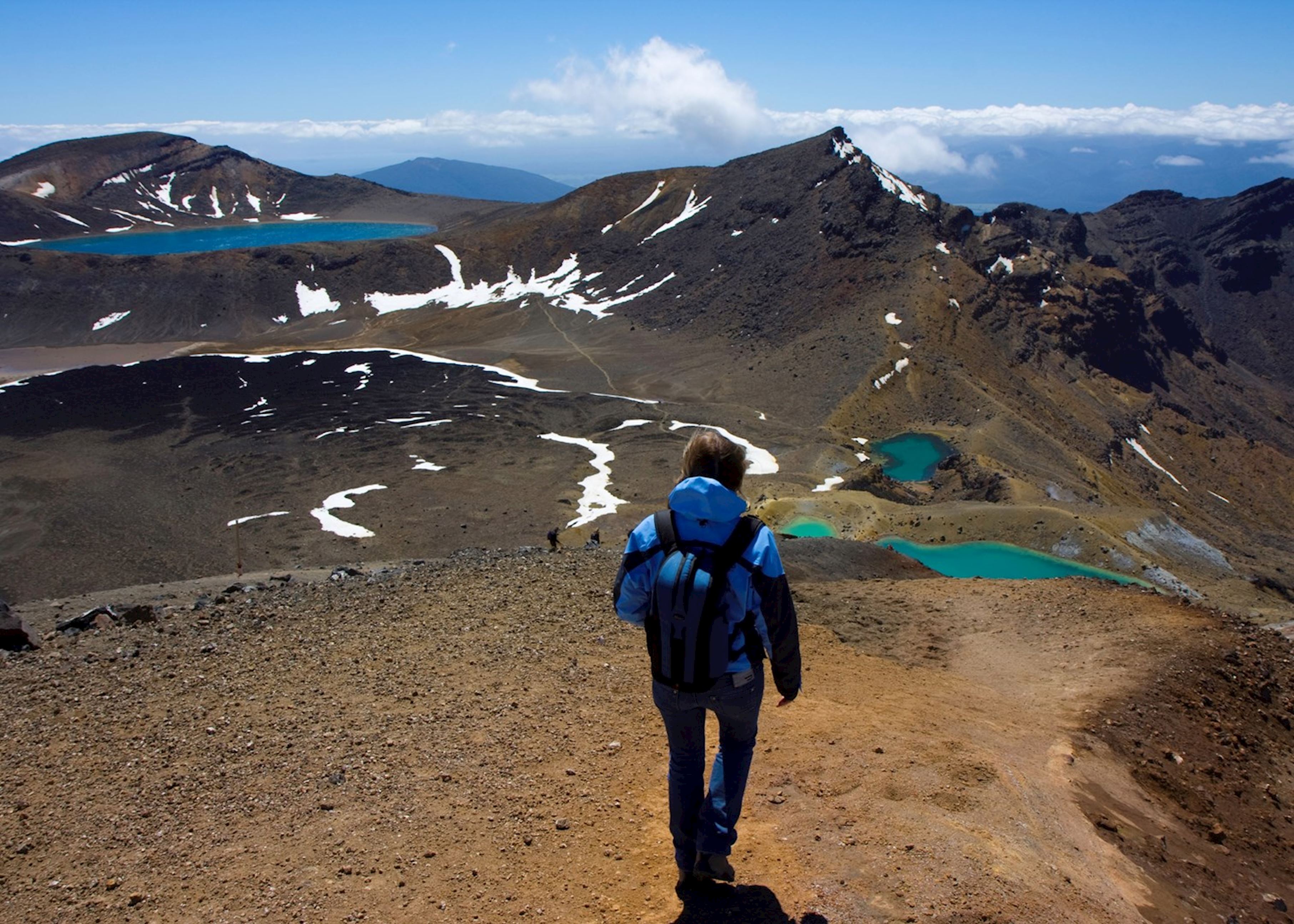 Tongariro National Park was formed after several volcanic eruptions from at least six cones, the most recent of which came from the Red Crater at my feet less than 100 years ago. The resulting landscape is one of vast valleys, lava flows, startling blue lakes, towering volcanic cones and a rainbow of reds and yellows to remind you of the geothermal activity bubbling away under your feet. Though my legs were aching a little after the steep incline, what had escalated even higher was my opinion of New Zealand.

By boat with Linzi

Waves of settlers have arrived at New Zealand by sea so the country has a rich marine history, and this, along with a host of iconic wildlife — dolphins, whales, seals and penguins — means that boat-based exploration can offer a varied experience for a visitor. 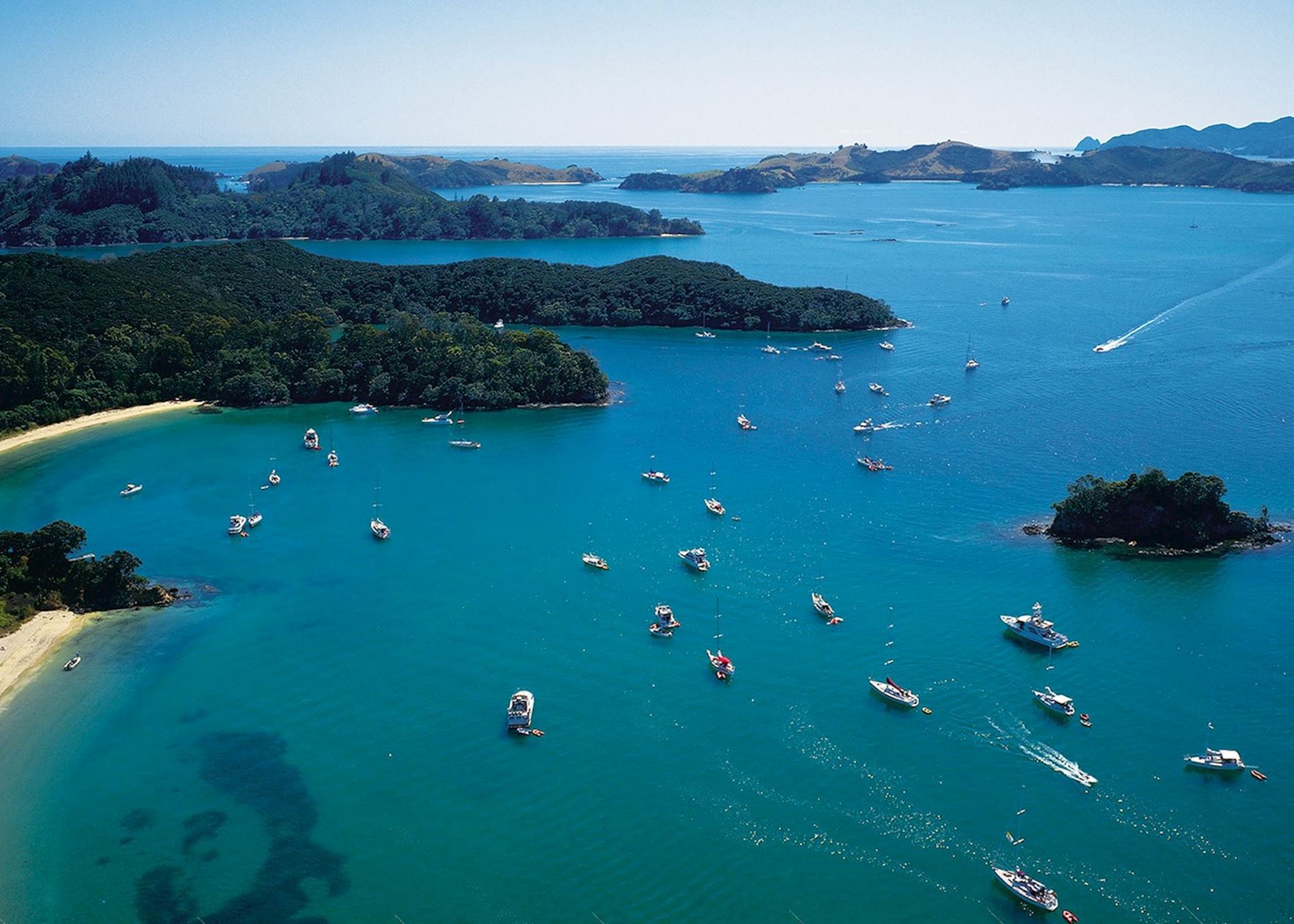 One of my favourite boat trips was a Bay of Islands cruise, departing from Paihia (see no. 4 on map). The boat traced the path of Captain Cook's journey in to New Zealand, taking us around the Bay area's beautiful little islands. One particular island has become a conservation project, restoring the landscapes and encouraging the rebirth of the indigenous species back into New Zealand.

Throughout the trip we were also treated to stories bringing the Maori culture and legends to life. The 'Hole in the Rock' is one stop along the way. If the sea is steady enough you can sail right into the hole and, according to Maori legend, if drops of water from the rock above fall on to you, it is considered good luck. 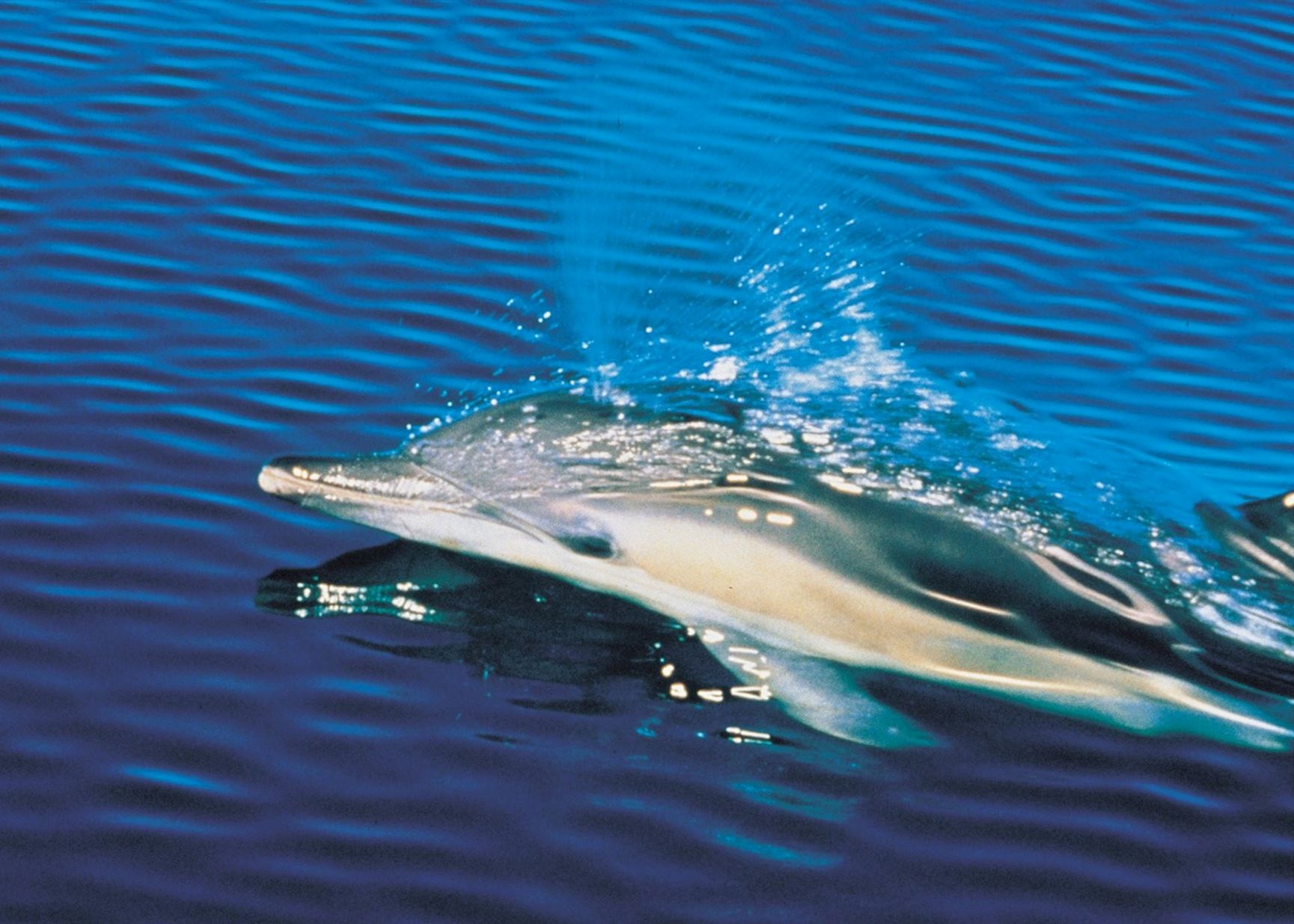 The eagle-eyed crew spotted a pod of bottlenose dolphins and we were soon making our way over to them. Once the skipper had assessed the conditions he arranged for some people to get in the water and swim with them, which was an unexpected highlight of the trip. As with many of the boat trips on offer around New Zealand it is the combination of the wildlife, history, stunning scenery and of course the expert knowledge of the crew that really make a journey on the water a memorable experience.

By train with Holly

With just one railway line in the North Island and two in the South, train travel in New Zealand is a rare treat. If you can fit it into an itinerary it's a great way to experience some spectacular scenery. 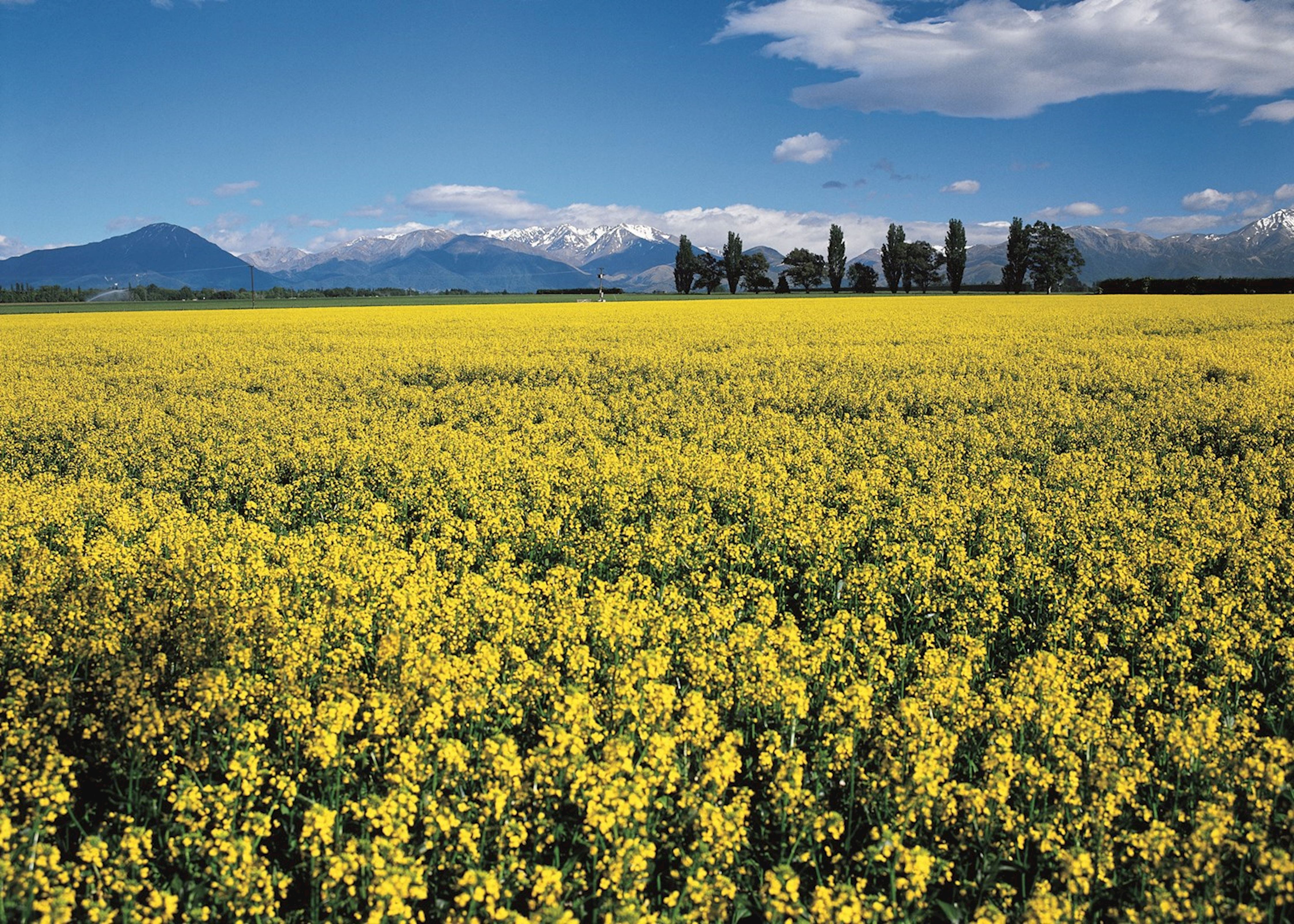 I travelled on the TranzAlpine Railway (see no. 5 on map), which takes you across the middle of the South Island via Arthur's Pass, the highest crossing point of the Southern Alps. I had an early start as I boarded in Christchurch, but as the train got going I soon woke up. The Canterbury Plains stretched out before us, shortly followed by views of the Waimakariri River gorge.

I took myself out to the viewing carriage to make the most of the photo opportunities and, before I knew it, the snow-capped mountains had wrapped themselves around us, overwhelming me with their size and beauty. 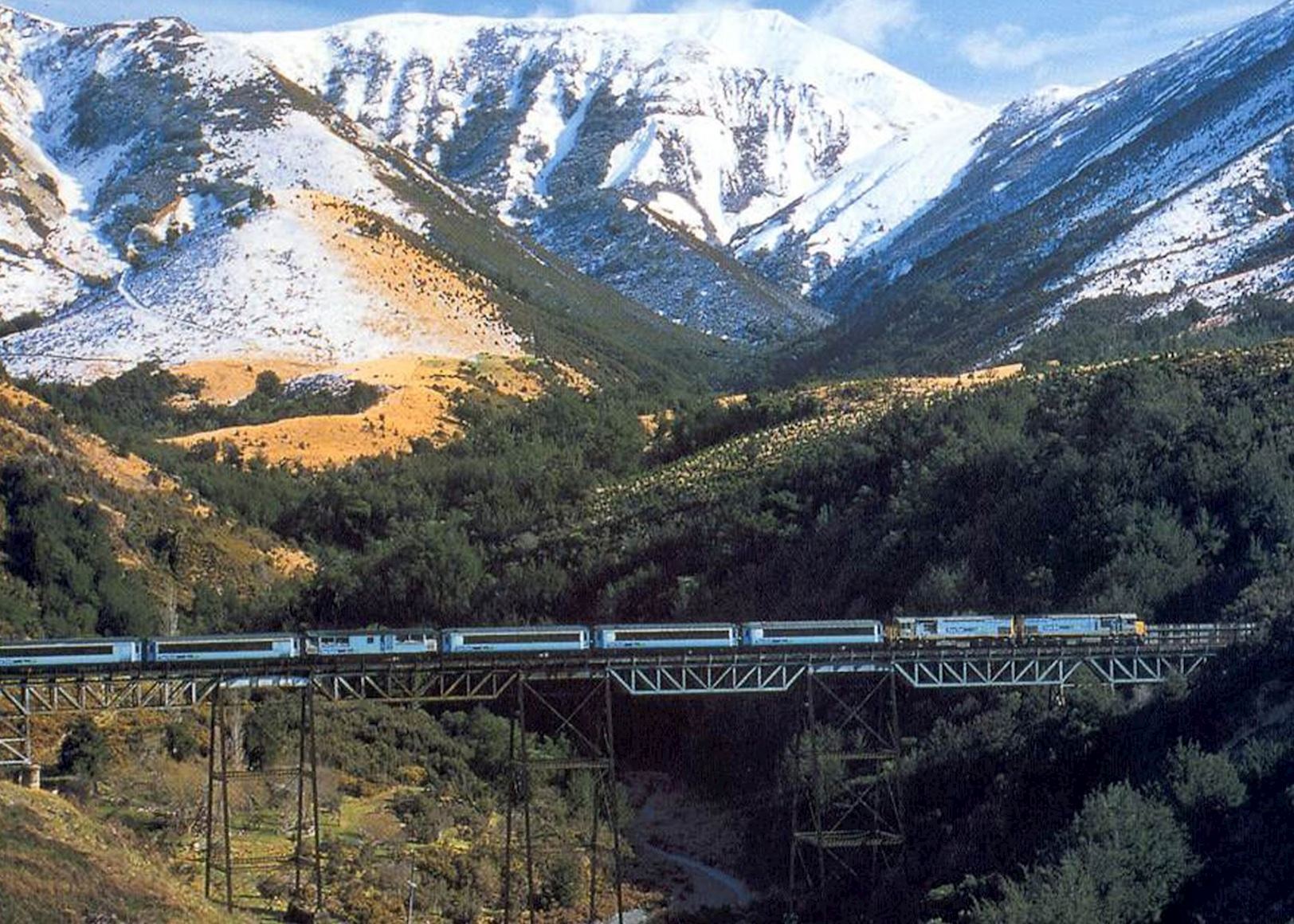 Along the way to the west coast we also saw rocky streams, high trestle bridges, gorges, forested hillsides and rural river valleys. All the carriages have panoramic windows so even from the comfort of my seat it was easy to soak it all up.

This journey into the heart of the Southern Alps really did take my breath away and leave very special memories. My one tip for the journey? Make sure your camera is charged and at the ready.