For the intrepid traveller, witnessing this natural performance unfold is a sight that will remain with you for a lifetime. As well as being in a prime location, staying in a tented camp offers you all the romance of a traditional safari — sharing stories around the campfire with other guests, dining under the stars, and waking to the birdsong as the first rays of sun hit the savannah. There’s no better way to experience the Migration.

The story begins in the latter half of January as the herds converge on the short grass plains of the southern Serengeti and the neighbouring Ngorongoro Conservation Area. Here the females give birth to their young in the safety of numbers that millions of animals bring, gorging on the nutrient rich ‘super grass’ fed by volcanic substrate formed long ago. February moves into March and the herds begin to exhaust the short grasses and move northwest to the southern and central Serengeti areas of Kusini and the Seronera Valley. The young animals are growing stronger.

As March moves into April and May the 'long rains' fall, drawing the herds toward the Western Corridor and the first of the river crossings. While a breakaway group of animals, often comprised of young males, move north, by June the majority of the herds are stomping and snorting on the banks of the Grumeti River. The numbers continue to mass, until the first of the animals plunge into the river to risk the teeth of the crocodiles gathered in anticipation and the strong flow of river waters that have been swollen by the floods of the rains.

The rain becomes a distant memory and the herds continue north, converging on the final barrier of the Mara River, the geographic boundary between the Serengeti of Tanzania and the Masai Mara of Kenya. This is the famous time of multiple river crossings, when the herds crowd into the confined space of the Masai Mara, turning the grasslands into a shifting mass of hides, fly-blown and chaotic. The wildebeest, zebra and gazelles are driven by their primal instinct to keep moving to find fresh grazing, while remaining alert enough to avoid the big cats that lurk, waiting for their next meal.

As the grasses are exhausted and the birth time approaches, the herds will cross the Mara for the last time and wander back south, through the Serengeti. From here, they’ll continue onto the short grass of Ndutu and the place of new beginnings. 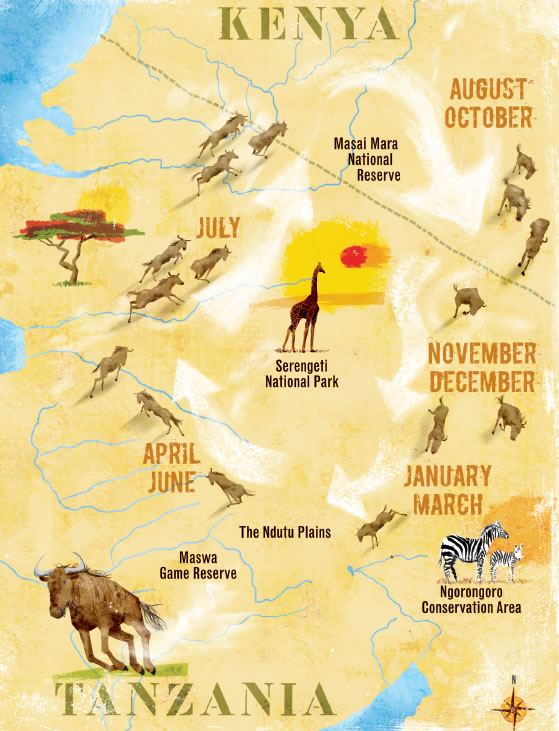