There isn’t much time left to enter our travel photography competition run in conjunction with The Sunday Times.

With the competition closing on 29th June, now is the time to get your photographs sent in for a chance to win a trip to either Canada, Southeast Asia or South Africa. Here we take a look at the latest entries and the winning photographers reveal the stories behind their fantastic shots.

'Nothing can prepare you for the experience of being the only western face in the midst of this spectacular blend of dance, drama, music and mime. It is the most awe-inspiring of cultural expressions. First the drumming begins as loud rhythms rise and fall with chanting and storytelling from priests and attendants. Pipes and horns accompany them and then with flamboyant costume and the transformation complete, the dancer appears. In spite of the exotic and extraordinary situation, we felt welcomed and included in the whole event as smiling faces greeted us throughout.

For this complex and uncharted situation with a fast moving subject I had set the camera at the start to aperture priority. The ISO was set up to 400 to ensure sharpness and some depth of field without camera shake. I chose a good quality 15-85 telephoto lens with image stabilisation for as much flexibility as possible. That said, no amount of photographic preparation can transcend the need to be alert, fearless and lucky to capture the moment.' 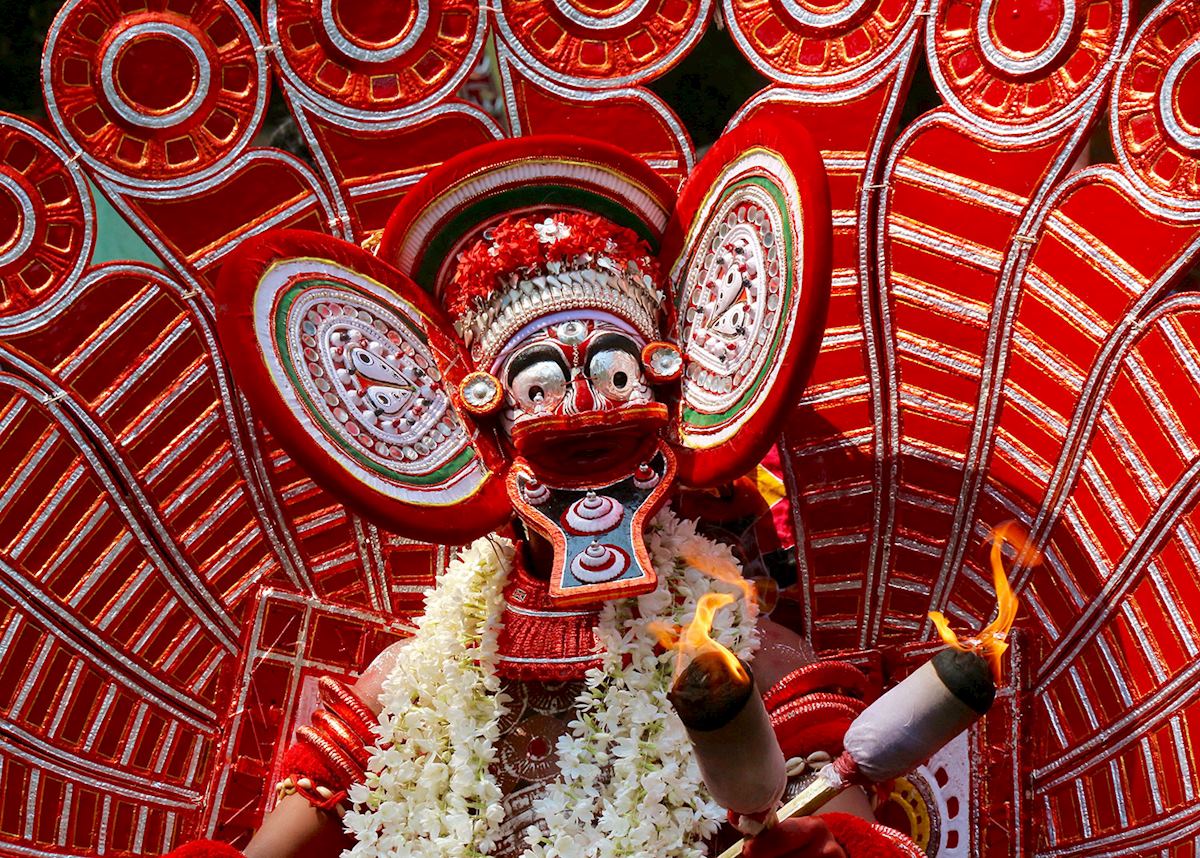 The rich, cultural heritage of Kerala offers a serene yet enthralling experience. Take a cruise on the backwaters through the patchwork of tea plantations and paddy fields, watch local life unfold as people hang out their washing and cook traditional food, before heading to Cochin to experience the bustling, lively side of Kerala.

With an abundance of shops, cafes and galleries, Cochin is well-known for its spice trade. We recommend visiting this off-the-beaten-track destination between January and March if you want to avoid the scorching temperatures and monsoon rains.

'This was taken on a three month trip around South America and the views from that morning, on Salar de Uyuni, are without doubt some of the best from the trip. The image captures a moment of pure elation for me after the culmination of three days travelling through the totally unique terrain of Eduardo Avaroa Andean Fauna National Reserve. The area has been preserved so well, and this is such an isolated and dazzling corner of the world where you really feel just how ancient this Earth really is.

Every moment as the sun rose over the salt flats was completely magical as the hues of the sky and the salty surface were shifting constantly. All of my photos taken that day were stunning but at that totally opportune moment I discovered a camera setting that brought out the shadows on the glistening floor. I knew that I needed a person in the frame to gain perspective and capture the true vastness as we were totally alone out there.' 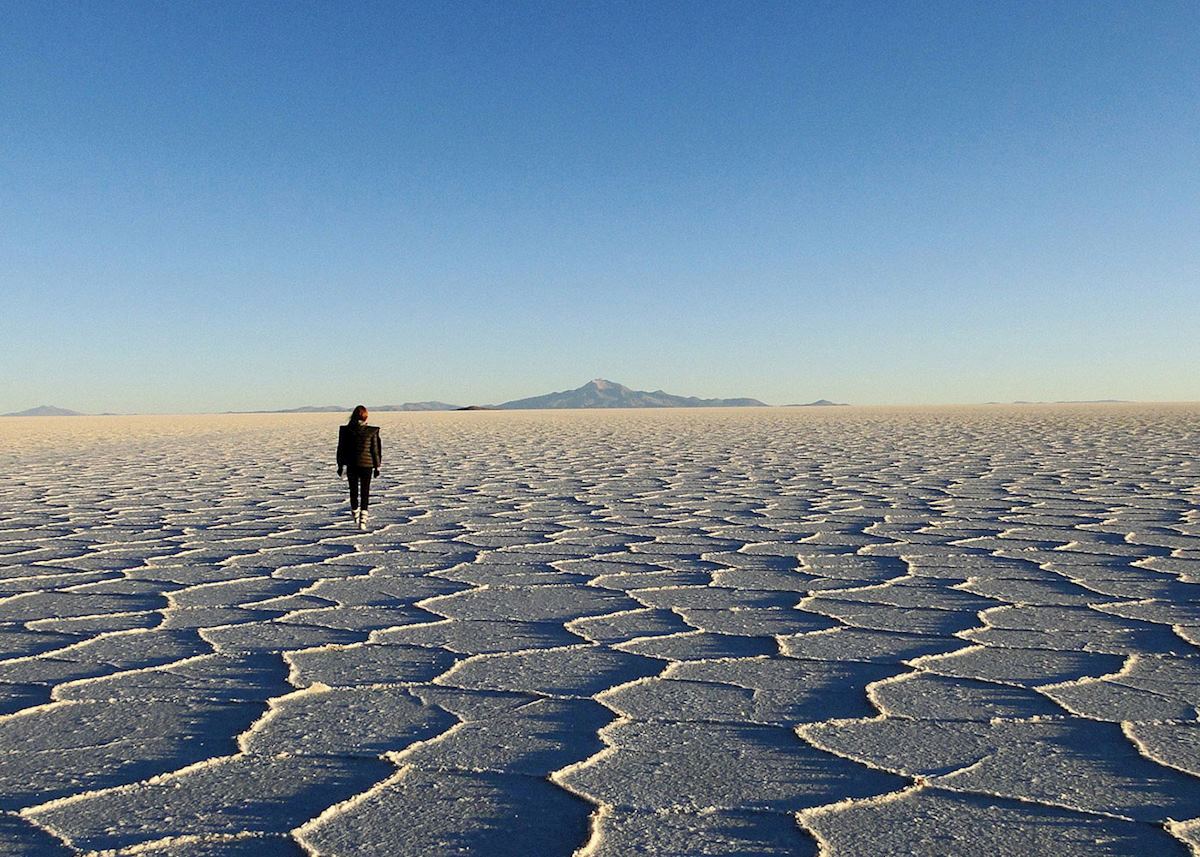 From the high Andean region to the lowland Chaco and Amazon jungle, Bolivia is a captivating destination. In the remote southwest of the country is the world’s largest salt flat, Salar de Ulyuni. The striking expanses of salt disappear over the horizon amongst unusual rock formations and glittering coloured lakes. This must-see sight is mesmerising when contrasted with the dense Amazon rainforest.

After taking in the silence and beauty of the salt flats you can head deep into the rainforest for hiking and trekking opportunities. Discover the colonial town of Sucre with its white-washed architecture and and explore the local markets where you will find locally-made crafts.

'My girlfriend and I were living in Santiago when we took a road trip to the north of Chile, across to Argentina and down to Santiago again. We found ourselves totally off the beaten track with this unbelievable view across the Moon Valley, known as Valle de la Luna, which is in the middle of the Atacama Desert in San Pedro. We were completely unprepared for it, wearing flip-flops and at a dizzying altitude of 2,200 metres we passed much better-equipped groups in 4x4’s and hiking boots.

We climbed up to the top of this outcrop and watched the sun set standing on the scarily windy summit. In fact, a pair of sunglasses had just been blown off down the slope so we had to clamber down and get them right after this photo was taken. The photograph was impromptu and a very lucky shot, I was sitting down and took it on my iPhone 5S.' 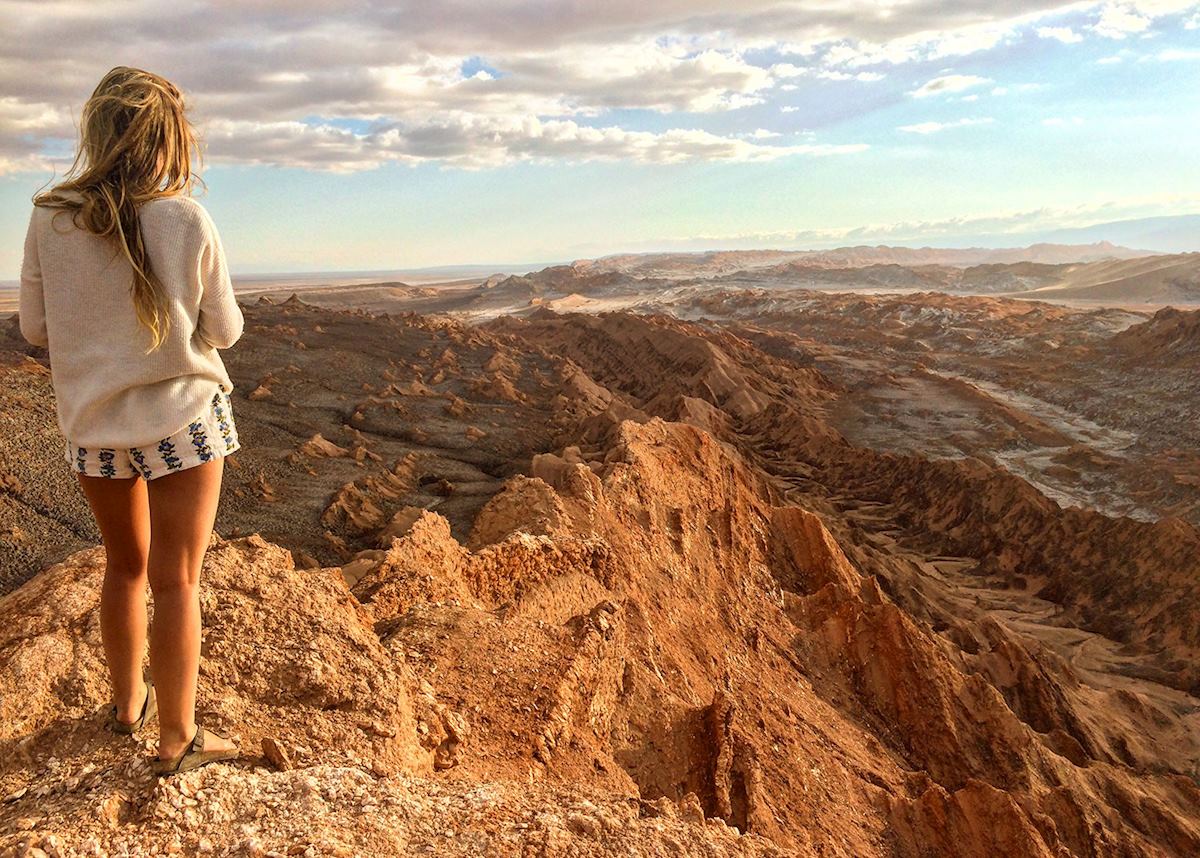 You can explore the Atacama Desert on foot, by bike or even on horseback. Driving from Calame and through Chuquicamata, over parched landscapes reflecting hues of orange, crimson and gold, you'll reach the old trade town of San Pedro. It is the ideal base during a trip to Chile to explore the desert as well as the barren region of volcanoes, salt flats, cacti, moon-like valleys and Tatio geysers.

Venture further and spend time on the tiny speck of volcanic rock in the middle of the Pacific Ocean called Easter Island. After a five hour flight from the Chilean mainland, explore the island and ponder the creation of the hundreds of stone statues known as ‘moai’.

'We were in Vietnam and Malaysia visiting my daughter who works in Kuala Lumpur. We went on a boat trip at sunset to the mouth of the river in Hoi An, where it meets the Cua Dai Sea. We passed several fishing villages, and our small boat followed the fishermen pictured in this image. This particular fisherman was throwing his net repeatedly, and I had time to change lenses and put my 70-200mm F/4 tele zoom on the camera.

I chose my camera settings to get a sharp image because it was getting dark and our boat was moving. As a result, I used the zoom setting of 200mm, speed of 1/1500 sec, aperture at F5.6, and 560 ISO. I had to put the autofocus on continuous with high frames per second to capture this picture during the throw of the net. The third throw from the fisherman was the successful one. We were lucky to have wonderful light during that evening. This part of the trip was a great contrast from the time we had just spent in busy Hanoi.' 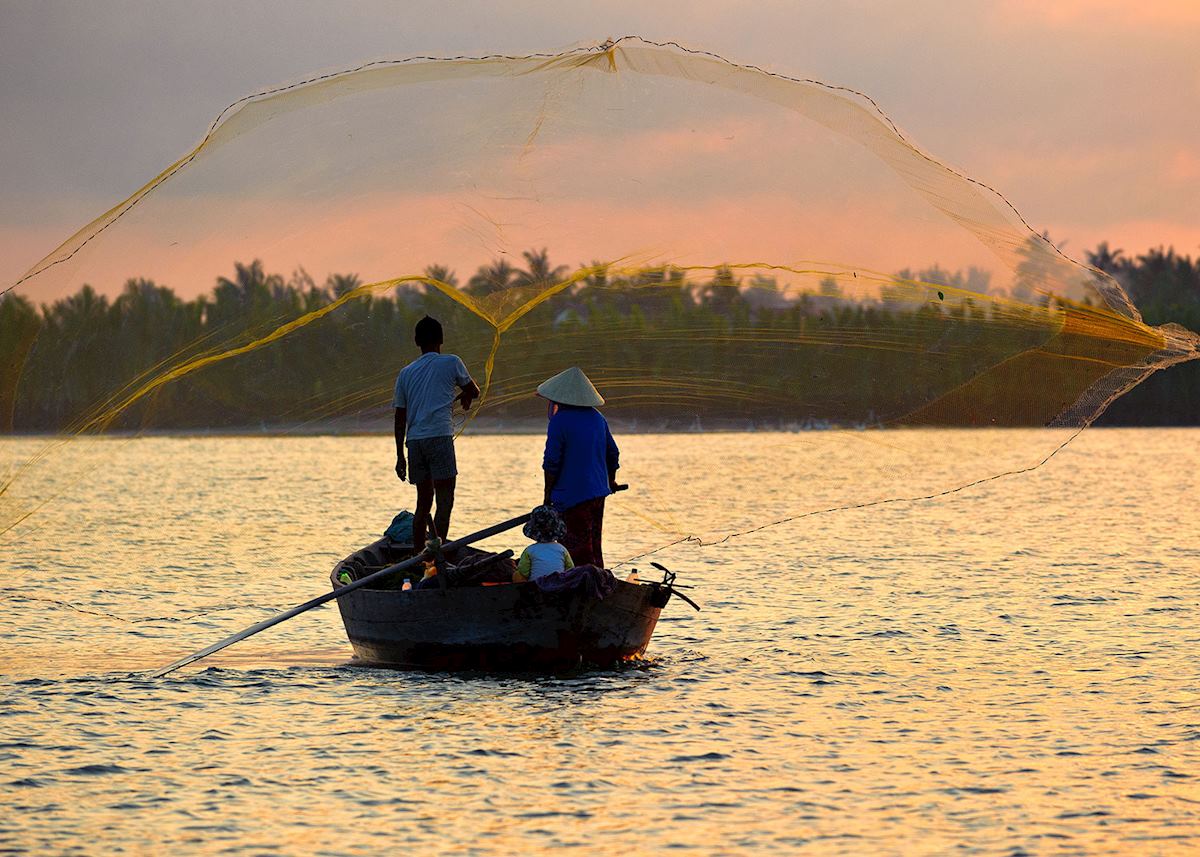 Last catch of the day, Hoi An

The character of Hoi An can be discovered when walking through the backstreets of the historic merchant town. A well-preserved trading port and UNESCO World Heritage Site, it attracts people from all over because of its reputation for high-grade silk and porcelain. Arrange for tailor-made suits or dresses to be made locally while you enjoy a quiet afternoon in the many restaurants, cafes and art galleries.

To further relax head down the Thu Bon River to Cua Dai Beach. Often combined with the mercantile history of Hoi An is colonial Hanoi, Vietnam’s capital. Hanoi offers bustling markets as well as the sheer mountainous scenery of Halong Bay. Cruise between the limestone inlets over calm waters, exploring by either junk or colonial-style cruiser and witnessing Vietnamese life at its most traditional.

Enter the Sunday Times Travel Photography Competition
Get in touch